It’s time for another trip down memory lane…

From time to time, I hear people talking about Autodesk’s more “radical” R&D investments… whether in the consumer software space – much of which is being driven by the Maker movement – or related to the bio/nano research Andrew Hessel and team are performing at Pier 9. I can understand that to some this might seem as though Autodesk is departing from its core mission, in some way.

I have a slightly different perspective on this… yes, we had perhaps 15 years of our history – largely during the Bartz era – where we were laser-focused on democratizing CAD, acting as a “fast follower” in the industry. But go back a little further and you’ll remember projects that would’ve been perfectly at home in an “Autodesk X” division: HyperChem, Xanadu, the Cyberspace Developer Kit… (yes, we were doing VR back in 1987 at 4 frames per second :-) and “Chaos: The Software”. (You’ll find references to the first two in the final part of my interview with John Walker from 2008.)

I remember loving James Gleick’s “Chaos: Making a New Science”, back in the day. (Later on I also really enjoyed his biography of Isaac Newton, which I found to be a great companion volume to Neal Stephenson’s much more speculative – but still excellent – Baroque Cycle.) This was the book that popularized the “butterfly effect”, and without it I doubt very much we’d have had Terry Pratchett’s wonderful quantum weather butterflies (who flap their wings to create miniature thunderstorms to fend off predators).

Back in the late 1980s, James Gleick collaborated with Josh Gordon, Rudy Rucker and John Walker on an Autodesk-branded suite of tools allowing people to explore chaos theory. 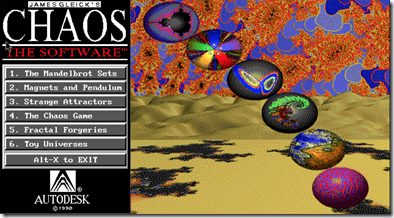 I didn’t actually get to use “Chaos: The Software” myself, until now – when I joined Autodesk the product had already been retired – so I was thrilled to find out over the weekend that it has been available for several years not only in executable format but as source code (see the download page on Rudy’s site for the licensing/copyright, etc. – as shareware it’s fine for non-commercial use but you’ll need special permission to use it for commercial purposes).

The source code is in C and assembly language and uses the Metashel DOS GUI.

The executable can be run on old Windows systems or using the free DOSBox tool. Here’s a video of me running “Chaos: The Software” on my Mac using DOSBox:

There’s certainly more to “Chaos: The Software” than I’ve shown in this video. I’m going to spend some more time playing with it, when I get the chance, although as the User Guide doesn’t appear to be available anywhere online it might be hard to get to grips with its full capabilities.

It seems that while Rudy Rucker was at Autodesk, he also worked on an “Artificial Life Lab” program called Boppers: this, too, is available with full source code – and for Visual Studio 2010 – so I’m also hoping to find the time to take a look at that.

Does anyone remember using any of these tools, back in the day? If so, post a comment!