Last week I was in Singapore for our annual, internal, two-day technical summit. Upwards of 500 members of Autodesk’s various engineering and technical teams gathered together at the iconic Marina Bay Sands for the event. 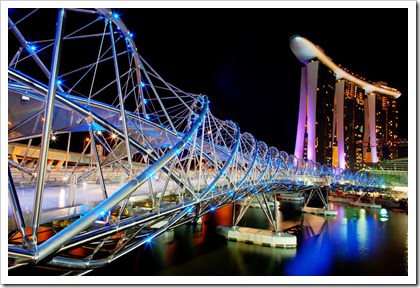 The hotel was pretty amazing. Having been told my room number (4619), I first exited the elevator at the 4th floor. It’s only then that I realised the rooms on each floor were numbered in double digits, and so my room was on the 46th!

While I didn’t end up making much use of the hotel’s facilities – aside from the conference centre, of course – I did end up taking an early morning swim in the infinity pool on the roof (the 57th floor), each morning. From what I can tell there isn’t a time of day when the pool isn’t bristling with selfie-sticks held by narcissistic millennials.

Hypocritically, here’s a quick video I took using my GoPro. It wasn’t on a stick, though, in case that counts for anything. And yes, you don’t see that many selfies being taken in the background, so of course I was exaggerating for effect.

This is the first time the Tech Summit has been held in Singapore: prior venues have been Shanghai (2010 & 2011), San Francisco (2012), Boston (2013) and Toronto (2014). I’ve been lucky enough to have attended all but the first one of these (at the time I was managing a team and it was more relevant for some of them to attend than me), and each has been really valuable.

As usual, with such events, the value is partly with the information that gets shared but mainly from the connections that are made between participants: I interacted with a great many people from across the company, many of whom I’d (at best) interacted with previously by email. And people are working on such cool stuff… it’s such a great chance to interact with a diverse set of talented people.

The first day started with keynotes from Buzz Kross (Senior VP of our Design, Lifecycle and Simulation division) and Jeff Kowalski (Autodesk’s CTO). Buzz talked about the company’s strategy for the Manufacturing industry while Jeff focused on opportunities for internal engineering collaboration. Both very worthwhile.

The rest of the morning I attended internal sessions, but the afternoon was spent in a great, hands-on workshop by an external trainer, Shawn Drost from Hack Reactor, who talked about the future of the Web platform. The vision Shawn presented is really interesting and relates to the increased use of compilers such as Emscripten to take code written in languages like C/C++ and target the browser via asm.js and (in due course) WebAssembly (wasm). This – according to Shawn – is the next big wave of the web. The WebAssembly project looks to be really interesting – you can find out more about it here and here. While the initial focus of WebAssembly is to hook into LLVM – which is used by much of the software industry – Microsoft’s participation presumably means that Visual Studio will eventually be able to target wasm, too. Interesting times.

The second day’s keynotes were external. They started with one from Dominic Wilcox, an artist/designer from the UK who wrote an excellent little book called Variations on Normal. Dominic’s entertaining presentation was both whimsical and inspiring… but then I prefer cars with three wheels, so it was always going to resonate with me. :-)

Dominic tweeted about the session and happened to include a shot of me:

The next keynote was by Singapore-based Sangeet Choudary, who talked to us about “platform thinking”. Music to my ears, given my focus on APIs and developer-oriented platforms.

The next five sessions I attended were internal, finding out more about projects as diverse as reality capture feature extraction, A360 viewing and collaboration (on web and mobile) and the extensibility of Dynamo.

The second day wrapped up with a closing keynote from Amar Hanspal followed by the presentation of internal engineering awards (which have been branded “Techies” :-), the first time Autodesk has done such a thing. I’d been nominated in a couple of categories and ended up receiving the award for “Autodesk Technology Ambassador”: something that would not have happened if it weren’t for this blog and its readers. A great honour… especially as there were only six individual awards presented (another of which – for Open Source Evangelist – was won by my friend and VR Hackathon teammate, Lars Scheider). The AutoCAD security feature team also won a well-deserved team award for their work in that area. 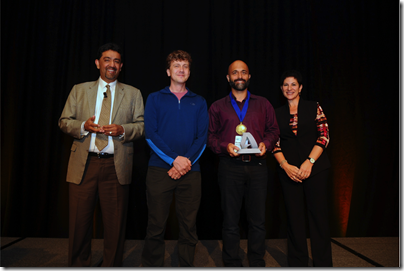 The trophies were – of course – designed using Autodesk software and then 3D printed in metallic plastic. They’re very cool: 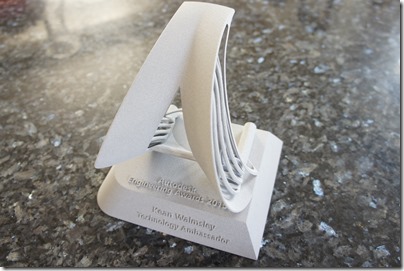 Then it was off to the closing party, held at the incredible Gardens by the Bay. That place is really trippy at night: it’s like a cross between Pandora and Endor (hmm – Pandor or Pendora?). The giant mushrooms all glowed blue when we were there, so presumably they’re all powered by Hue… now there’s a remote control I’d like to hack: imagine going into those gardens and rotating the colour wheel!

After the official party wrapped up, we managed to find a bar on top of one of the glowing mushrooms to carry on the discussions until they, in turn, asked us to leave (but only because it was closing… honest :-). All in all another great experience. I hope I get to keep attending these summits… it’s like getting a brief, annual glimpse of geek heaven.

photo credit: Gardens by the Bay via photopin(license)