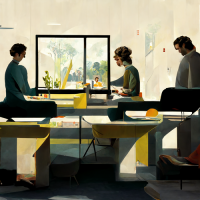 In a recent post, I mentioned that I’ve been asked to help lead our efforts in a particular area of research. I was deliberately vague at the time. Now, with Autodesk University 2022 around the corner, it seems a good time to say more about this. I hope it stimulates some interesting discussions at the event. As a company, one of Autodesk’s core interests is to enable the design and creation of healthier, safer, more resilient spaces. We want to explore tools for designers and architects that help them create buildings with more attention to the occupants. In the... Read more →

Followers of this blog will have seen me mention the Voxel-based Architectural Space Analysis (VASA) package (you can find all the posts about it here). VASA is a toolkit that allows you to voxelise and analyse 3D geometry, whether for pathfinding, visibility or daylight analysis. The big news of the day is that Autodesk Research has managed to port VASA across to work with the popular voxel-based creation environment, Minecraft. This actually was pretty easy, as we could completely ignore all the code needed to voxelise a 3D environment from the codebase and focus on the analysis side of... Read more → 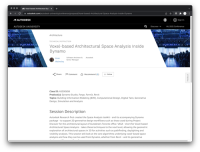 I’ve gone ahead and submitted two class proposals for Autodesk University 2022. If you think they should be part of this year’s event, I’d certainly appreciate you voting for them: Voxel-based Architectural Space Analysis inside Dynamo Autodesk Research first created the Space Analysis toolkit - and its accompanying Dynamo package - to support 2D generative design workflows such as those used during Project Discover for the architectural layout of Autodesk's Toronto office. VASA - short for Voxel-based Architectural Space Analysis - takes these techniques to the next level, allowing the geometric exploration of architectural spaces in 3D for activities... Read more →

Rhys Goldstein has now published Part 5 in his video series on using VASA. In it, Rhys walks through the latest two samples that come with VASA 0.2.0, one of which I talked a bit about in a recent post. Both samples make use of sample points – one in the context of aggregating path information, while the other uses them (as we’ve seen) for sensor placement. Both workflows have significant potential for use in the context of generative design – something I hope to dig into at some point in another post. Hopefully you’ll find this video –... Read more →

Last week I mentioned the release of VASA 0.2.0, which includes some new nodes and samples that raise some really interesting possibilities. I couldn’t help but come back to the “sensor coverage” sample (named 12-VASA-Sensor-Coverage.dyn), in particular, as I can see so many possibilities for its use. Here’s the description Rhys Goldstein included in the sample: A demonstration of how to combine sample point generation and proximity operations to select locations on walls and ceilings using the Voxel-based Architectural Space Analysis (VASA) package. In this example, the locations are used to place sensors and approximate their coverage. First, sample... Read more →

A video on using slicing, meshes and Python with VASA

Fancy a nice slice of VASA to finish your week? Luckily Rhys Goldstein is here with Part 4 in his video series introducing VASA features. In this episode, Rhys talks about using slicing functions with voxel models, how to iterate through voxel models using Python, as well as a number of nodes that help you work with meshes inside Dynamo (and VASA). He also covers a couple of techniques that allow you to export voxel models to Dynamo geometry, and even navigates through the shell of an exported voxel model to show you what it looks like from the... Read more →

A video on visibility and daylight analysis with VASA

Rhys Goldstein has published the third part of his video series introducing capabilities of the VASA (Voxel-based Architectural Space Analysis) package for Dynamo. This part focuses on how VASA can perform visibility and daylighting analyses. Here’s an animation showing some of topics covered: And here’s the video itself: We’re taking a break from this series now until the New Year, when Rhys will be sharing a walkthrough of the remaining VASA samples. Read more →

The first version of VASA we posted to the Dynamo package manager was numbered 0.1.0. Yesterday we posted a new version with some interesting new features, not least of which is the lack of an error when you install it (this one was very much my fault: I’d neglected to mark a couple of DLLs as not being node libraries when I posted it). Here’s a breakdown of the new features in 0.1.2, courtesy of the package’s author, Rhys Goldstein: Added VoxelModel.ToSolid, which converts a voxel model into a Dynamo solid that can be processed using standard Dynamo operations... Read more →

Using VASA via WebAssembly for pathfinding inside FormIt

As a quick recap, here are the posts we’ve seen in recent weeks on this topic: Autodesk FormIt and its JavaScript API Introductory look at FormIt and the Maze Generator plugin. Using VASA with FormIt via Dynamo – Part 1 How VASA can be used within Dynamo for FormIt to solve mazes (etc.) in 3D. Using VASA with FormIt via Dynamo – Part 2 Applying the same principle with urban scenes imported by the 3D Context Creator plugin. In today’s post we look at the fact that VASA can also be used directly from a FormIt JavaScript plugin –... Read more →

In the last post we looked at using VASA from within Dynamo for FormIt to solve mazes generated by a cool plugin created by Brett from the FormIt team. The Dynamo graph we saw used VASA in “3D mode” – where the voxel height is higher than 1 – but that came with the added need to create a floor for the maze (something that isn’t too hard, as we know the exact dimensions and location of the maze). In today’s post we’re looking at how VASA might be used to perform pathfinding operations at the urban scale, taking... Read more →

In this recent post we looked at FormIt’s JavaScript API and learned how Brett Garrison was able to use it to develop a Maze Generator plugin. In this post we look at one way to find solutions for the mazes generated by this plugin using VASA from Dynamo. When I first started looking into VASA with FormIt, Rhys Goldstein sent across a Dynamo graph he’d used to grab contextual building geometry from FormIt – to create a voxel model of the space – and then send the pathfinding results back afterwards. I’ve adapted this graph to work with the... Read more →

A video on pathfinding with VASA

Rhys Goldstein has published the second part of his informative video series on using the VASA (Voxel-based Architectural Space Analysis) package with Dynamo. The first part was an overall introduction to the package while this part dives into pathfinding, taking a close look at samples that show how it might be used in both 2D and 3D. While the overall video is really interesting – some of you might find it a bit long at 43 minutes but it’s quite watchable at 2X and is packed full of useful information – one of the sections that stood out for... Read more →

Autodesk FormIt and its JavaScript API

A few weeks ago I started taking a closer look at Autodesk FormIt, mainly with a view to understanding how it might integrate with VASA. FormIt is a multi-platform (which I believe in this case means Windows, iOS and web) conceptual design and analysis tool. I haven’t really followed the development of FormIt, over the years, so if you’re interested in learning more about that then I suggested heading over to the product team’s blog. If you want to get started with using FormIt, then this Primer seems helpful. Two things in particular had me intrigued about FormIt: its... Read more →

A video introduction to VASA

Rhys Goldstein, the researcher behind our 2D and 3D Space Analysis toolkits, has recorded a great video introduction to VASA (an acronym for Voxel-based Architectural Space Analysis). It steps through how to install the VASA package inside Dynamo and then create a simple voxelisation of Dynamo geometry. Rhys also shows how to load and run the samples provided with the package, and takes some time to step through – and then dissect – the main overview sample. Here it is: If you don’t have time to spend 23 minutes watching a video, it should be quite watchable at higher... Read more →

I’ve been hinting about this for a few weeks now, but today is (very excitingly) the day for the big unveiling. My colleague Rhys Goldstein has been working his magic, once again, taking the algorithms he developed for the 2D Space Analysis package and applying them to 3-space. If you were impressed by Space Analysis, what we’re showing now may just knock your socks off. The new package is called VASA, which stands for Voxel-based Architectural Space Analysis. It’s available today for download from the Dynamo Package Manager. It’s worth unpacking a couple of terms, here: voxel-based means VASA... Read more →