This question came up during last week’s accelerator, and is part of the reason I spent creating the last post: is it possible to selectively unlock certain layers for the duration of commands that have been specified by the user? Let’s take an example: you have layers that should remain locked, apart from when using the MOVE command (COPY and ERASE should not work). The approach I took was to maintain a dictionary mapping command names to lists of layers to unlock. When a command is launched – which we can tell using the Document.CommandWillStart event – we check... Read more →

This is a problem that developers have been struggling with for some time, and it came up again at the recent Cloud Accelerator: how to control the display of AutoCAD geometry at a per-viewport level, perhaps to implement your own “isolate in a viewport” command. It’s certainly possible to control layer visibility at the viewport level, of course, but this is sometimes at odds with how users wish to use layers for their own purposes. An application may want to isolate geometry in a certain location from a number of layers, for instance, and it becomes cumbersome to hijack... Read more →

Last week we introduced the ExecuteInCommandContextAsync() method and saw it in action from a context menu click event. In today’s post we’re going to see how it can be used for a lot more: we’re going to use it to respond to external, operating system-level events (although admittedly we’re handling the event in-process to AutoCAD via .NET). What we’re actually going to do is fire off a command inside AutoCAD – in our case we’re going to use RECTANG to create square polylines – each time we find that a file has been placed in a particular folder (in... Read more →

It’s time to start looking in more detail at some of the new API capabilities in AutoCAD 2016. To give you a sense of what to expect in terms of a timeline, this week we’ll look at a couple of uses for DocumentCollection.ExecuteInCommandContextAsync() and next week we’ll look at point cloud floorplan extraction and (hopefully) security and signing. The first use of ExecuteInCommandContextAsync() I wanted to highlight was one raised in a blog comment a couple of months ago. The idea is simple enough: we want to be able to launch a command reliably from an event handler, in... Read more →

In this post we’re wrapping up this mini-series on docking, which is part of a much broader story arc around a “command-line helper” tool, of course. But then we’re reaching the end of that, too, I suspect, as the app’s just about done. Hopefully it’s ready for posting to Autodesk Labs, at least. Last time we added right-click dragging to allow our keywords window to be moved around without interrupting the active command. Now we’re taking it a step further to preview docking at one of the four corners of the drawing window, as well as to actually dock... Read more →

I’m happy to say that the implementation I mentioned in the last post ended up being pretty straightforward. Which is actually great, as I have some important posts to work on for next week. :-) Today we’re going to take a look at the next stage of the “command-line helper” implementation: basic right-click movement of the global keywords dialog, so we can set a custom location for the dialog without needing to use the KWSDOCK command. Here’s the code in action: The main work for this stage was to add support for right-click, mouse move and right mouse-button up... Read more →

During the course of this week we’re going to look at extending the command-line helper sample posted last week by allowing our global keywords window to “dock” to the four corners of the drawing window as well as to remain fixed at a custom location somewhere on the screen. I use the term “dock” here loosely, as we’re really just placing it in one of the corners of the drawing window. If we wanted a modeless dialog that was properly docked into AutoCAD then we’d almost certainly want to use a PaletteSet. Here’s a quick video demonstrating the KWSDOCK... Read more →

Today we’re going to look at the implementation talked about in the last post: we’re going to see how it’s possible to use the Application.PreTranslateMessage() method to hack AutoCAD’s message-loop and basically convert typed keywords into global ones. This is actually pretty neat (yes, even if I do say so myself :-) and frankly I’m surprised it works. Here’s the overall approach: Track the characters typed into the command-line Add individual characters into a list Backspace removes the tail of the list Arrow-keys invalidate the tracking: if the user accesses entries in the command-history we can’t deal with that,... Read more →

Here’s a quick piece of code to finish up the week to complement what we saw earlier. The idea is that on localized AutoCAD versions this code will allow the user to enter English commands without needing the underscore prefix. The code works by detecting an “unknown” command and then attempting to execute it again after prefixing an underscore to launch a global command. Which may or may not work, of course, so we certainly need to set a flag to avoid descending into an infinite loop of commands being called while prefixed by an ever-expanding legion of underscores.... Read more →

After introducing this project in the last post, now it’s time to share some code. The project, as it currently stands, contains three source files: the first one relates to AutoCAD – it implements the various commands we’ll use to attach event handlers to tell us when to display (or hide) keywords and the other two files relate to the UI we’ll use to display them. We’re going to use an invisible window which has a child popup containing a listbox of our keywords. Here’s the application in action – for now in English AutoCAD, as that’s what I... Read more →

I’m up in the mountains, supposedly on vacation, but as one of our children woke up with a fever, I’m skipping the morning session on the slopes to stay home with him. Which gives me the chance to start writing up a little project I’ve been working on for our Localization team. Here’s the idea… apparently it’s relatively common in certain countries for AutoCAD users to learn the product in English but then end up working with a localized version of the software. While it’s always possible to use global commands and keywords by prefixing an underscore, it’s not... Read more →

This is really cool. Fellow architect on the AutoCAD team, Jiri Kripac – who originally wrote AutoCAD’s “AModeler” facet modeler and is the driving force behind AutoCAD’s Associative Framework – has written a really interesting ObjectARX sample to perform an associative fillet between two curves. Given Jiri’s background, this is as close to a canonical sample for implementing an operation using the Associative Framework – in this case by creating a custom AcDbAssocActionBody – as you’re likely to find. Here’s a video showing this custom fillet in action, and how it can be used with parameters and expressions to... Read more →

It seems like I’ve been living in JavaScript land (and no, I deliberately didn’t say “hell” – it’s actually been fun :-) for the last few weeks, between one thing or another. But I think I’ve finally put the finishing touches on the last of the JavaScript API samples I’ve prepared for AU 2014. This sample was inspired by Jim Awe – an old friend and colleague – who is working on something similar for another platform. So I can’t take any credit for the way it works, just for the plumbing it took to make it work with... Read more →

To follow on from yesterday’s post, today we’re going to look at two C# source files that work with the HTML page – and referenced JavaScript files – which I will leave online rather than reproducing here. As a brief reminder of the functionality – if you haven’t yet watched the screencast shown last time – this version of the app shows an embedded 3D view that reacts to the creation – and deletion – of geometry from the associated AutoCAD model. You will see the bounding boxes for geometry appear in the WebGL view (powered by Three.js) as... Read more →

As part of my preparations for AU, I’ve been extending this Three.js integration sample to make it more responsive to model changes: I went ahead and implemented event handlers in .NET – much as we saw in the last post – to send interaction information through to JavaScript so that it can update the HTML palette view. The code is in pretty good shape, but I still need to decide whether to post it separately or with the other JavaScript samples I’m working on (I’ll also be showing Paper.js and Isomer integrations during my AU talk, as well as... Read more →

Displaying the area of the last AutoCAD entity in an HTML palette using JavaScript and .NET

The title of this one is a little specific – the post actually deals with the scenario of passing data from .NET to an HTML-defined palette, as well as some other tips & tricks – but it’s something I wanted to show. Here’s the basic idea: whenever a closed curve gets added to the drawing, we want to display its area as the only item in an HTML palette. We also want the palette to update when objects get erased, etc., which makes life somewhat trickier. To set the scene, here’s a quick screencast of the finished application in... Read more → 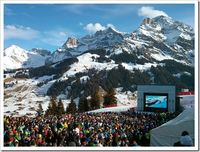 I was up in Adelboden, this weekend, for the Men’s FIS World Cup Slalom and Giant Slalom events. Yes, just watching – not participating :-) – although I did get the chance to catch a few much gentler slopes on my snowboard during the course of the weekend. On the Saturday – during the Giant Slalom – there was a pretty amazing incident: a young Norwegian competitor, Henrik Kristofferson, very nearly hit a television worker during his first run down. Thankfully no-one was hurt, and Henrik was very understanding about the whole thing (he was given a restart but,... Read more →

This post is based on some information provided by Peter Muigg, a developer in Germany Austria who has long been a friend of Autodesk. In fact, if memory serves me well – and do step in if I’m mis-remembering, Peter – back in 1995 when I first joined the company, Peter delivered German-language ObjectARX training on behalf of Autodesk. Peter reached out with this tip just before the holiday break: he needed to display a dialog on AutoCAD startup, but found that it was too soon to do so on IExtentionApplication.Initialize() (it’s assumed this module is either demand- or... Read more →