I’ve finally found the time to view the main information from the recent Autodesk University event, and thought it worth highlighting what I consider to be some of the “big ticket” items, especially from my own – somewhat Forge- and digital twin-centric – perspective.

First-up, Forge was everywhere in the keynotes. If it wasn’t previously clear that Autodesk is serious about becoming a platform company, it should be from the messaging at this AU. On a side note, there are a number of internal organisational changes that have happened/are happening at Autodesk to accelerate this shift, so I’m currently much more optimistic that we’ll get there. (Those of you who have followed me, over the years, will know that I’m passionate about Autodesk platform technology – whether APIs to our desktop products such as AutoCAD or web-based platforms such as Forge – so this makes me very excited for the future.)

Here are the three general session keynote videos from YouTube (so I could embed them in this post – they’re also available on the AU site, if you prefer to watch them there):

The other industry-specific keynotes also talk about Forge: you can find them here. Including the Forge keynote itself, of course. :-)

All of this is well and good, but what about my particular interest in building digital twins using Forge?

There were a couple of “must see” sessions on that front. First was the Forge Road Map session, which had some really important tidbits for Forge developers.

It’s always nice to see Project Dasher featured by the Forge team, which it was in the slide describing the Data Visualization Extension and other recent updates to Forge:

The next slide contained some genuinely huge news (beyond the fact that Dasher’s streamlines are also making their way into the DataViz Extension):

Yes, the Forge viewer is finally being ported off THREE.js r71! We already have a development branch of the viewer that is largely decoupled from that venerable version of THREE.js, and it’ll soon be an option for developers to opt into the latest & greatest THREE.js in their applications. This is great news for lots of reasons: aside from the overall – very significant – improvements to THREE.js that have been made in the last 6+ years since r71 was released, developers will be able to integrate capabilities developed by members of the vibrant THREE.js ecosystem using more recent versions. Happy days!

The session taking a deeper dive into building digital twins using Forge is definitely worth a watch, too. Of course I was happy to see Michael Beale using Dasher to demo the Forge viewer and its Data Visualization Extension: 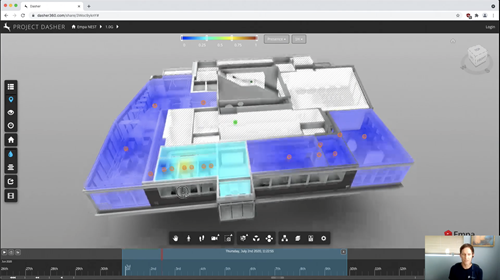 The demos from customers using Forge to solve particular industry-centric problems were really compelling, too. It’s extremely impressive what customers, developers and system integrators have been able to build using Forge in the digital twin space. Be sure to check it out.

And while it’s not exactly related to AU, I did want to point out this article by Martyn Day in AEC Magazine, which was published right before the event. The article talks about Autodesk Tandem and Dasher and how they’re both using Forge. I was really pleased to see Martyn’s take on this emerging technology space. 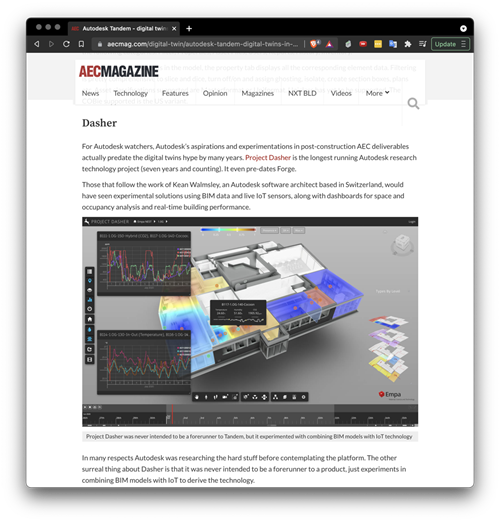 That’s it for this quick round-up of the important Forge- and digital twin-related updates from AU 2021. I’ve really only just started working through the content from this year’s event, so it’s very possible I’ll post further such updates over the coming weeks.