« Blinking lights with a Netduino Plus 2 | Main | A gamification experiment: Apollonian Obliteration »

It’s been a good week for gadgets. Aside from getting a Netduino and some additional accessories through the post, I also received a newer version of the Leap Motion controller. The last one I had was a 0.4 version (at least that’s what was written on the box) and the new one is a 0.6.5.

Here they are, side-by-side. The one on the left is the newer one, of course, although I quite like the Johnny 5 look of the older one, myself. 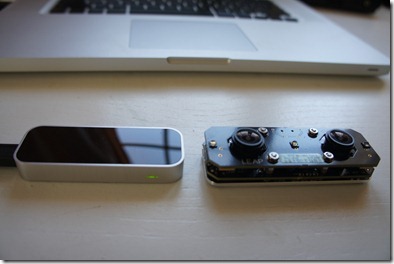 I went ahead and installed the latest SDK – which took me from 0.7.1 up to 0.7.3 – and made sure the code I’d posted previously continues to work (it does). Before anyone asks me for the older device, I should say it’s already been handed down to a colleague working in a different product team. Sorry about that.

The newer controllers are a bit more sensitive: the size of the capture volume has been increased, so your hand doesn’t need to be quite as high above the device as was previously the case. I also found that I no longer had to set the device on low power mode when working with a virtualised environment.

More enhancements are on the way, too: I’ve been told work is being done to further mitigate concerns – such as those I mentioned in my own posts – about the need to hover for the gesture detection to work properly. It’ll be very interesting to see what the team at Leap Motion is able to come up with – hopefully a device that can be used effectively over longer periods.

AutoCAD is clearly just one of the 3D products in the Autodesk portfolio. Without going into specifics, I can say there are other teams also coming up with prototype integrations. One such integration – for 123D Design – has a demo video posted to YouTube:

Echoing something I read in the comments, I also like the way the 123D team managed to get the video exactly 1:23 in length. :-)