Last week Autodesk’s Developer Advocacy and Support team organised their second Forge Accelerator where developers could prototype Digital Twins using the Forge viewer’s Data Visualization Extension (codenamed Hyperion). The first of these Accelerators was back in December: while these virtual Accelerator events are currently held monthly, the Hyperion team needed some time to integrate the feedback from that event, so this was really only the second opportunity to focus on this new capability.

I was a little busy last week (mainly with attending and speaking at the AI in AEC 2021 conference, which I found very interesting), so I wasn’t able to engage very much with the Accelerator, other than by giving an impromptu briefing on Project Dasher for a handful of the attendees.

So I really can’t yet report on any progress made – I’m looking forward to catching the recordings of the end-of-week share-outs from the various teams – but I did want to let people know about some important news that came along with the event: the Data Visualization Extension has now entered public Beta, which means anyone can take a look at the documentation and get started with using the extension. 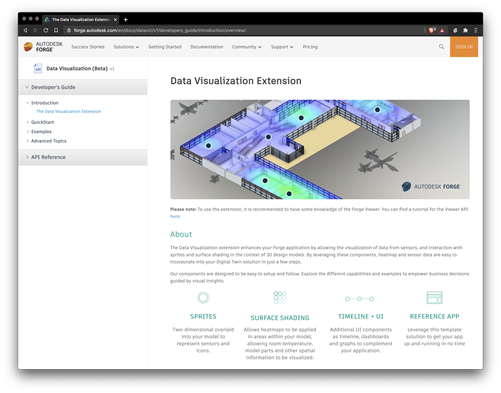 If you want to dive right into the code, you can find the full source for the React-based Reference Application on GitHub. I would recommend at least skimming through the documentation, however, as it appears to be excellent. Whether you’re interested in adding Sprites, Heatmaps or a Timeline to your Digital Twin, be sure to take a look. (In fairness the Timeline component is not currently documented as part of this work – the component is being published directly by Autodesk Research, for now, but do let me know if you have any questions about its use – Dasher has made extensive use of it over the last year or two.)

So if you’re looking to use Forge to help build a Digital Twin, take a look at this new extension. I’m delighted to see so many of the concepts we’ve been exploring through Project Dasher getting into the hands of Forge developers. There’s more to come, too!