Last week was a big week for the team developing the Data Visualization Extension (codenamed Hyperion) for the Forge viewer. And for the Dasher team, of course, who were very excited to see what our development partners can do with the new Dasher-like capabilities being built into Forge.

As it’s still early days for the extension, the decision was made to limit the number of organisations (I won’t say companies, as a university was included) who would work with Hyperion to just 5. With hindsight this was a very wise decision, as there were a number of teething issues with the reference application, and the various teams needed quite a bit of handholding (hats off to Petr Broz and Michael Beale, who both really went above and beyond to help the teams working with Hyperion).

I asked the teams to share a few words and graphics about their respective projects to be included in this blog post, to give people a sense of what’s possible but also to encourage them to sign up for the accelerators scheduled for January and February. 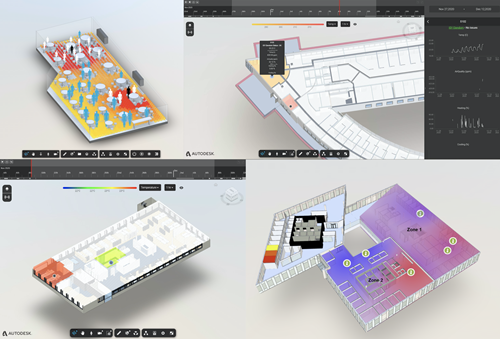 Each team had access to the source code for a React-based reference application that showed how to use the new extension to display sample data from a shared Azure Time Series Insights instance. Typical steps involved:

This was an ambitious set of steps, which didn’t always make sense to achieve in a single week of development: some teams understandably prioritised adjacent areas for the accelerator itself.

The team from Norconsult focused on taking a model of their HQ building and getting real time-series data fed into their own Azure IoT Hub to be displayed in the viewer. The real “wow” factor in their demo of what they achieved – aside from the fact they had really managed all four of the above steps – was the fact they also built in a connection to their FM system, allowing users to launch a page from that system via a link generated for that particular asset. Very cool!

The team from Carleton focused once again on displaying COVID-related simulation data in the Forge viewer. (You may recall their project from the recent AEC Hackathon or their excellent COVID-19 game from the Forge Hackathon at AU.) The team didn’t quite finish as much as they’d have liked – they made solid progress integrating their own model, but didn’t get as far as being able to display their own simulation results. They have slightly different needs than those currently met by the Hyperion project, and their feedback is going to be invaluable to help make it better suited to simulation in general.

Here’s the way their current visualization looks: this will be integrated fully once they’ve survived this week’s exam-related deadlines, no doubt. I’m really looking forward to seeing the results. 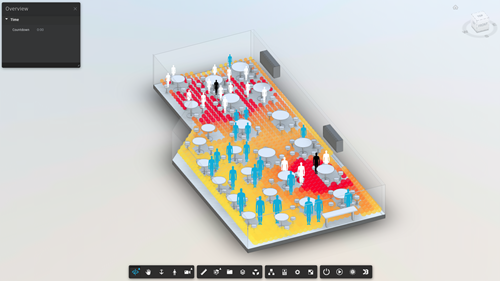 I was very happy to see a team join from Switzerland. The team from Gruner AG built a prototype digital twin of one of their offices. They were also able to complete the steps to get their own data – coming from both a room sensor and an outdoor weather station – displayed in their model, with Azure once again serving it up. I was impressed by what this small team was able to accomplish, especially as they were coming from a desktop-centric envionment. 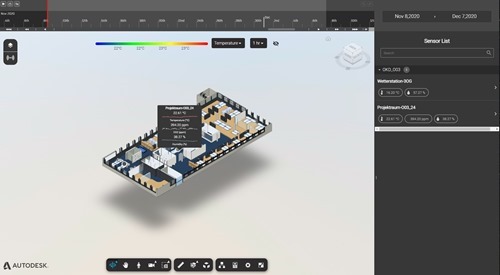 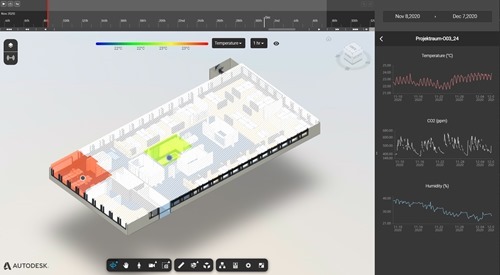 The BIMvirtual vikings were in fine form, as usual, continuing their journey to deliver valuable Proptech to real estate and infrastructure owners. Rather than focusing on building out the capabilities of the provided reference application, the BIMvirtual team spent their time integrating Hyperion into their existing Hackathon-winning digital twin implementation. I really liked their in-viewer zone definition tool, which was just fantastic. 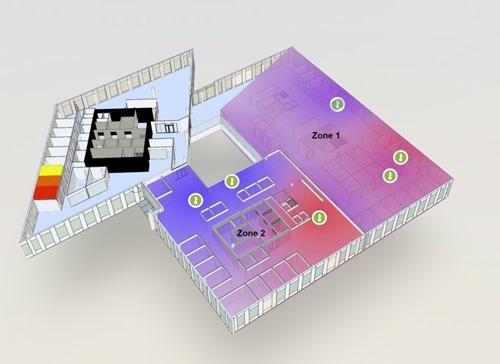 They didn’t get the chance to integrate the Hyperion timeline, but that’s hopefully something they’ll see value in doing at some point. This animation uses a simpler test version.

The team from Perkins & Will – some of whom had also won a prize for their workflow automation efforts during the recent Hackathon – showed a great demo of their digital twin work at the end of the accelerator week. At the time of writing they hadn’t yet had the chance to polish up their implementation for sharing here – and I’m on a deadline to post this today, given that tomorrow is once again Floppy Friday – so I’ll go ahead and update this post once I received some material from them.

Congratulations to all 5 teams for what they were able to achieve during a hectic week. You should all be feeling proud of what you’ve been able to create. I know the Hyperion team really appreciated your commitment to testing out their new extension and providing really valuable feedback on future directions.

If you like the idea of building your own Dasher at an upcoming accelerator in January or February, please apply today!