After all the fun of the Autodesk World Cup in Bordeaux, it was off to London for my first-ever non-US Autodesk University. (I nearly made it to AU Sydney and AU India during last year’s big trip, but I somehow managed to miss both events by a week or so… next time we do a “once in a lifetime” trip I’ll be sure to check the AU international schedule when planning it. ;-) 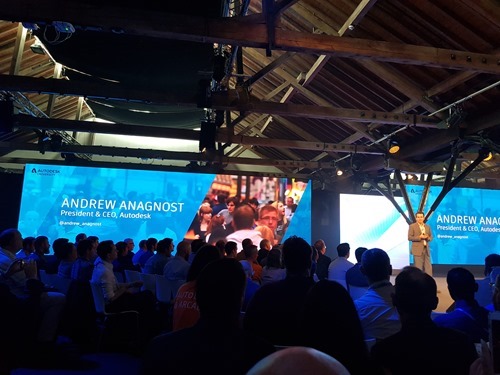 Arriving in London on Sunday morning, I had the chance to catch up with Simon, an old friend from university who lives and works near Windsor. On Monday we had the chance to grab a quick breakfast overlooking Windsor Castle before I headed across town to my hotel near the Tower of London. You can apparently tell that the Queen was in residence: the flag was flying above Windsor Castle. 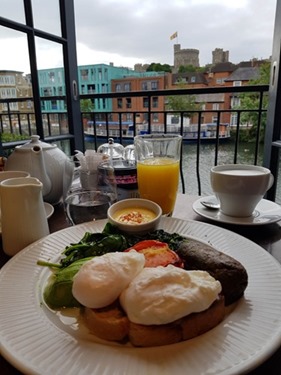 The hotel I stayed at was the citizenM Tower of London. The chain had been recommended to me by Dieter Vermeulen, and I like it a lot. There were some really interesting touches, such as an internal courtyard with crazy, floating lampshades (driven by the lifts, maybe?).

There was also a bar with an outside terrace with spectacular views. 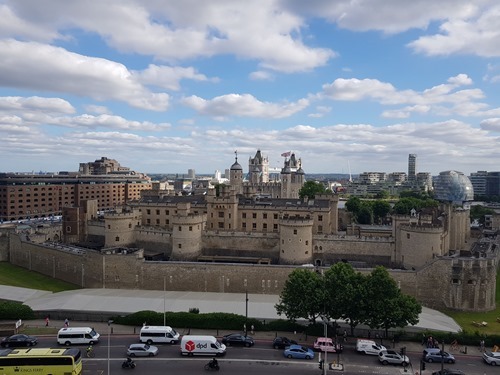 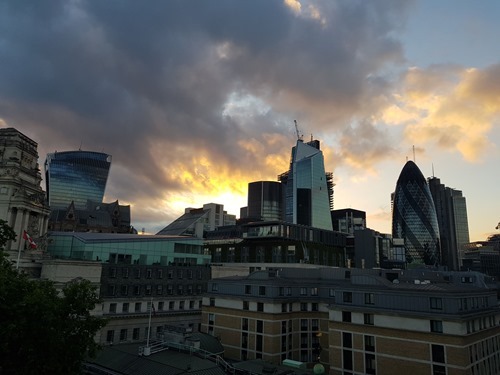 The Shard dominates the skyline in this part of London, and it’s a constant reminder of our knee-wobbling visit to the top (which actually happened courtesy of a friend of Simon’s) a few years ago. 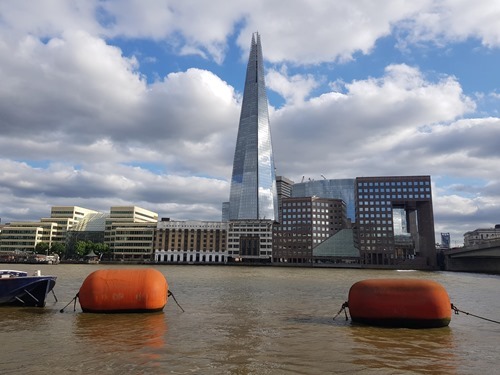 On Monday night I headed across London Bridge to meet back up with Simon to watch England vs. Tunisia somewhere near City Hall. We’d been hoping to find an outdoor screen, but ended up settling for an indoor one.

I find watching England play football to be agonising at the best of times. Thankfully a late goal – leaving England to win 2-1 – stopped riots from breaking out. What did break out was song… for the next few hours we came across pockets of England fans singing “Football’s coming home”. I found the song barely tolerable 20-odd years ago but now I can’t hear it without developing a rash. It’s a bit like what Italy fans have done to Seven Nation Army, although in a sense that’s worse, having been a great song to start with. 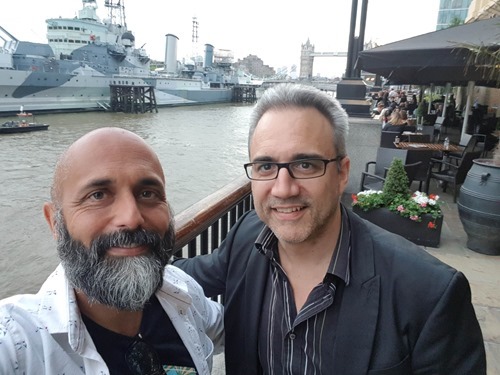 This part of London is very pretty by night. Here are a few snaps I took on my way back to the hotel, this time across Tower Bridge. 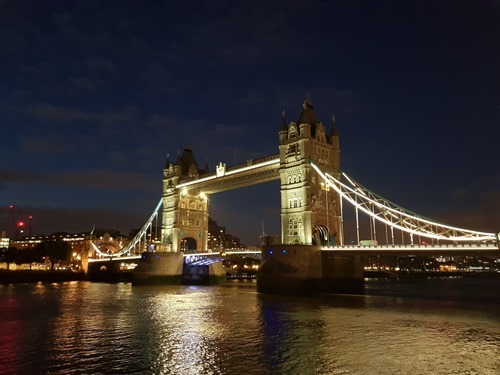 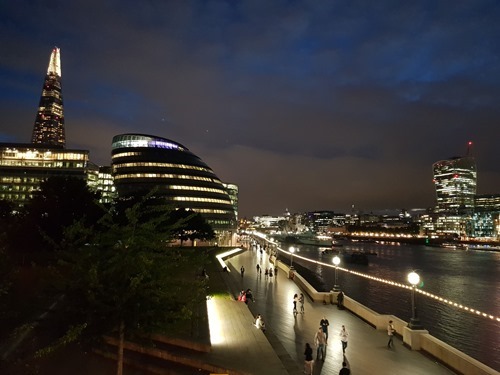 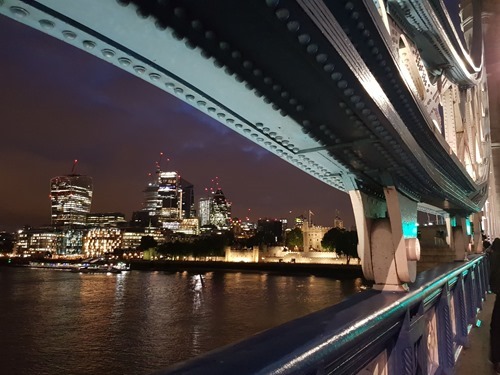 In the morning I walked 20 minutes across to Tobacco Dock for the first day of AU London. On the first day Google Maps attempted to take a group of us (staring at our phones, inevitably) through a closed construction site. Very much within the event’s theme, at least. ;-) 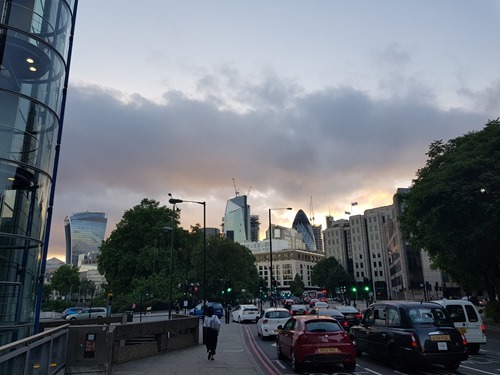 I love the choice of venue… I just find it fantastic to be able to see the sky! The closest I typically get to it at AU Las Vegas is the Venetian’s Grand Canal Shoppes. By comparison this was very refreshing. 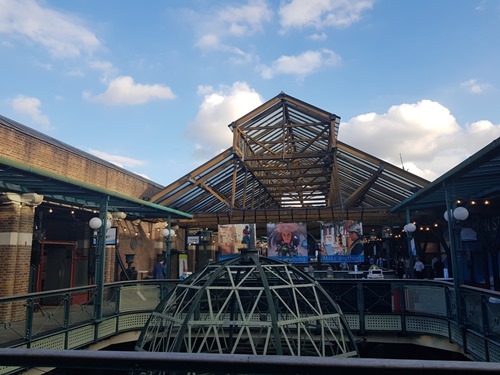 It is a bit brave, though… having an event so exposed to the elements is quite risky in the UK. Luckily the weather was perfect, this year: it did get a little warm during the afternoon but it was apparently nothing like the heatwave they suffered through during last year’s event. 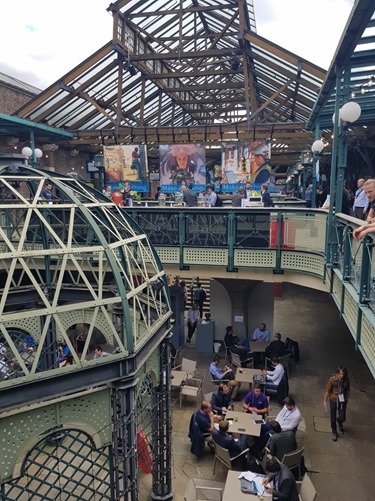 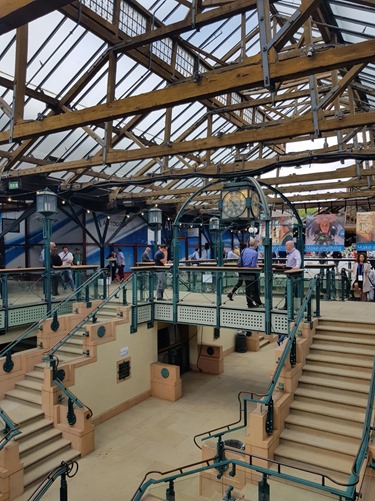 The first day’s keynotes were by Andrew Anagnost, Jaimie Johnston from Bryden Wood and my OCTO colleague Erin Bradner. The focus was largely on automation and the future of work. 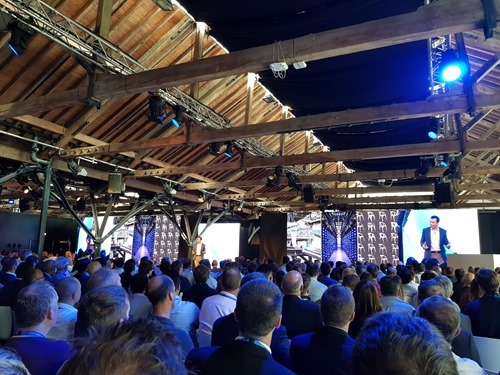 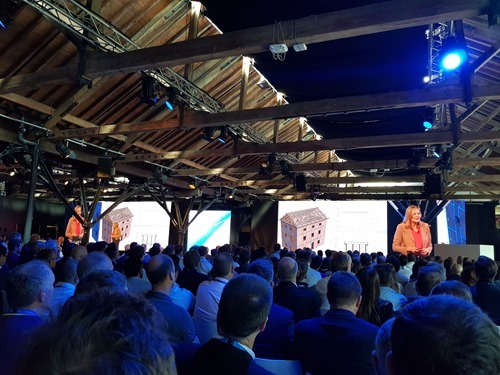 The second day’s keynotes were again by Andrew, and this time he was joined by Sarah Hodges, Richard Grylls from SLM Solutions and Stephen Hooper. These sessions were clearly more industry-centric, looking at convergence that’s happening across the industries Autodesk serves. 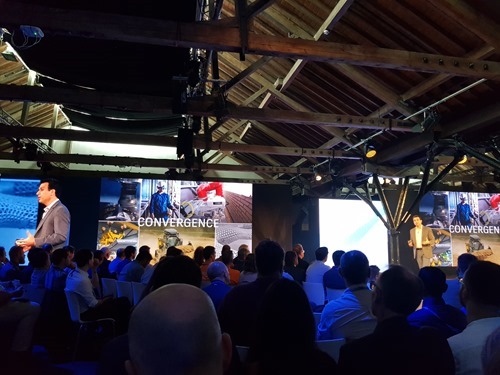 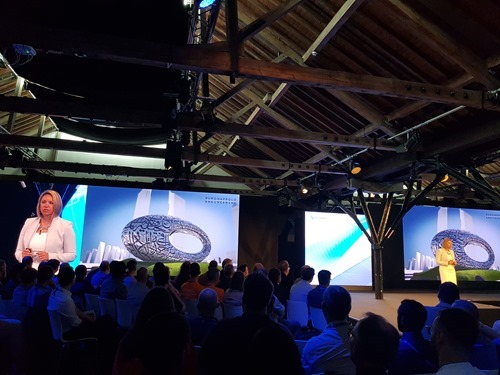 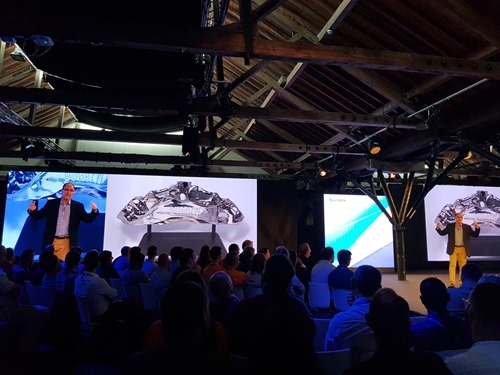 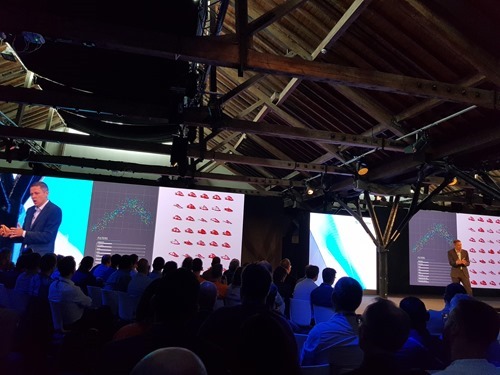 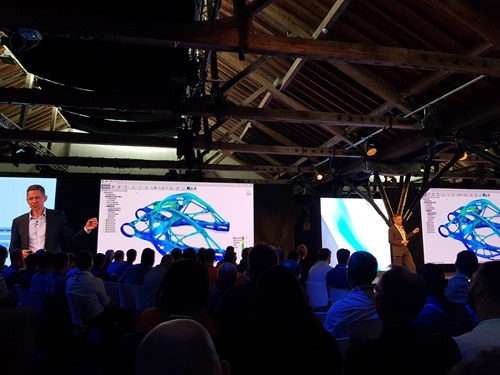 I feel the quality of the event’s keynotes was very good: all the speakers were engaging with interesting stories to tell. Do take the time to check them out via the above links, when you get the chance.

I didn’t get a huge amount of time to visit the exhibit hall, but I did stop by the Forge area and chat with Peter Schlipf and Philipp Mueller. (Philippe Leefsma and Augusto Goncalves were also around, just not in this photo.) 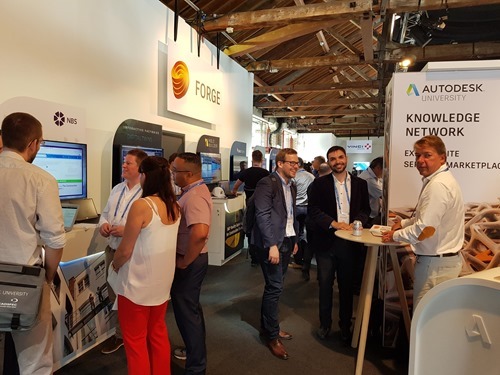 I managed to swing by the Moicon stand, to see one of the Dasher-inspired systems that I first saw at last week’s Forge Accelerator in Barcelona. 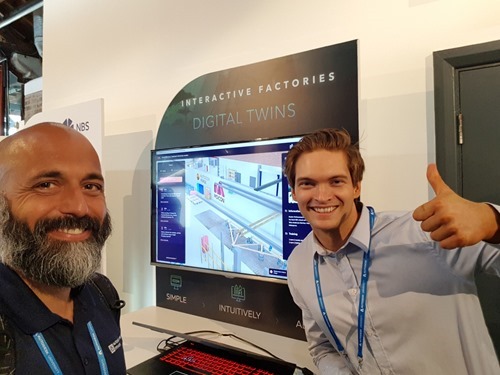 My session was well-attended and seemed to go quite well. By the start time of 3:25pm the room was getting quite warm… people did their best to stay engaged, though, which was greatly appreciated. (Thanks to Augusto Goncalves for sharing the below shots.) 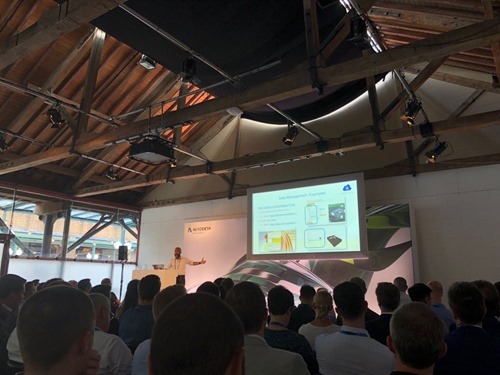 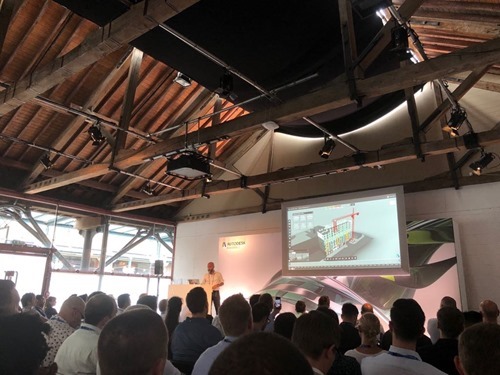 The evening event on the first day had industrial-scale production of Pimms and lemonade. 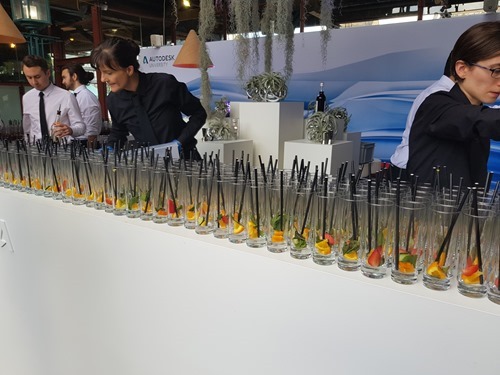 Heading home, it was my first time flying out of London City airport… it was just 15 minutes by the DLR from Shadwell, the local station for Tobacco Dock, and everything went very smoothly. 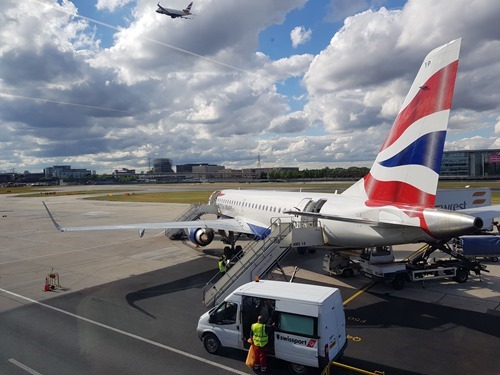 It was nice to arrive back in Switzerland, I have to admit. This trip was a lot of fun, but being away from the family for 9 days (8 nights) isn’t ideal. 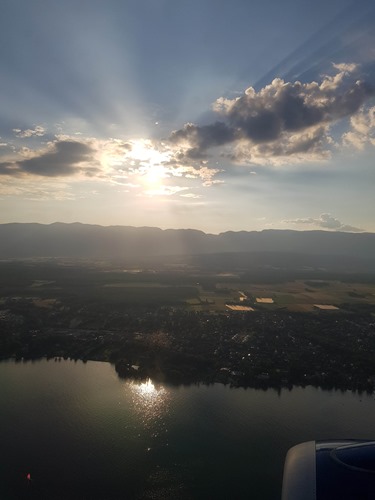 This year’s AU London made a very refreshing change from the craziness of AU Las Vegas. Much like AU Vegas, I met many interesting people, and ended up talking a lot about both Dasher 360 and generative design for AEC (the two areas I’ve been most focused on, of late). I liked the 2-day format, too: on the one hand it was a little compressed, but it was also less exhausting (especially as there was no jetlag involved). I hope I get the chance to come back, next year!