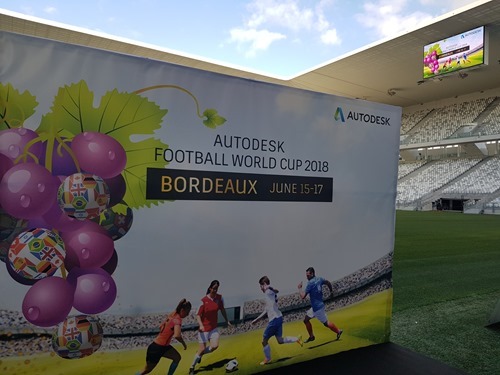 On Friday lunchtime – after a great few days in Barcelona for the Forge Accelerator – I hopped on an EasyJet flight to Bordeaux for this year’s internal Autodesk football tournament. I was one of the lucky ones: there was a later Vueling flight – which I’d very nearly opted to take – that was cancelled because of strikes in South-Eastern France. A bunch of players and fans from the Barcelona office ended up having to rent cars and drive them to Bordeaux to participate. Apparently a number of others from the UK and Italy were also impacted and unable to make it. (It turns out that a number of people also had trouble leaving Bordeaux because of the strike: for instance, the Sunday night EasyJet flight to Geneva was cancelled, so some of our players are now in the process of driving a one-way rental car across to Switzerland.)

When I arrived in Bordeaux at around 4:30pm I hopped into a taxi to take me to the lake area where the majority of the event hotels were located. The driver pointed out that the motorway was completely blocked and so chose to head through town… looking at the extent of the Friday night traffic I decided to skip checking into the hotel, for now, and go straight to the weekend’s wine festival, where we were due to meet later on.

Things got a bit complicated when I tried to enter the festival, though: for security reasons they don’t allow you to enter with a suitcase but neither do they provide anywhere you can leave bags. Argh. I was lucky to find a nearby restaurant that took pity on me and allowed me to leave my suitcase in their upstairs room for a few hours. 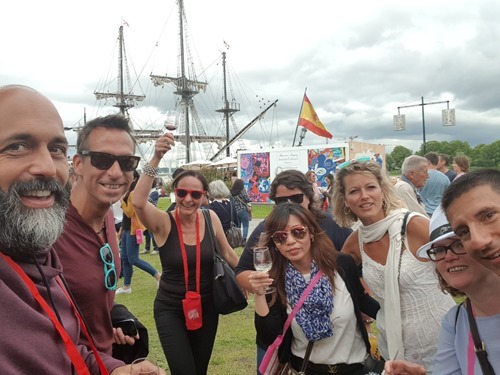 We tasted a few local wines before meeting at an Italian restaurant for dinner. Yes, I know… the logic was that we should eat pasta the evening before a big sporting event, so Italian it was. 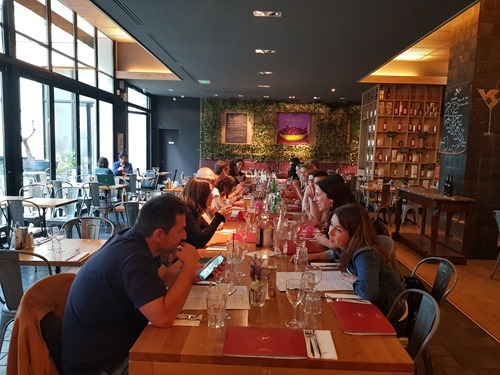 The Autodesk football tournament had fairly modest beginnings when it started back in the early 2000s. I was away working in the US or India when it started, but I’ve participated fairly religiously ever since (even if football really isn’t my favourite sport). This year was unbelievable: 1000 people came, including 29 men’s or mixed teams and 8 women’s teams, as well as several hundred fans.

The tournament’s format is that office and divisional teams all meet and play together over the course of a Saturday in June or July, with the group stages in the morning and the knock-out stages in the afternoon. I will say that I’m actually in favour of a complete re-think of this format… this is something I’ve advocated to people, over the last couple of years, to shift the focus away from competition and towards true team-building.

I would love to see people register for the tournament – perhaps stating their preferred positions – and then have the teams formed – perhaps with a balance of skill-levels – at (more or less) random, leading to people getting to know their colleagues from all over the company. I know this would perhaps be unpopular with people who prefer to play football competitively, but every year there’s at least one player who gets injured seriously, and I question whether this level of competitiveness makes sense for an internal tournament. And it would be a great way to form connections with colleagues from elsewhere in the company… sometimes I feel that it’s a little pointless strengthening ties with colleagues who come from the same office or team, while develop slow-burning animosities with people from elsewhere. (I’m over-stating this, of course, because I’ve made firm friendships with lots of people I’ve played against, over the years, but still… it’s really just meant to illustrate my point.)

I wouldn’t normally air internal laundry, in this way, but I know a lot of my colleagues read this blog and I’d be happy if this kind of approach was considered for future tournaments.

[Steps down from soapbox]

Anyway, I digress. The organisation of this year’s event was really impressive: the day’s matches actually finished a few minutes early, which is basically unheard of.

The Neuchatel men’s team got off to a rocky start: we lost our first two group games – to Canada and to GSO – but managed to claw back the next two with wins against VP Staff and the Precon Knights. 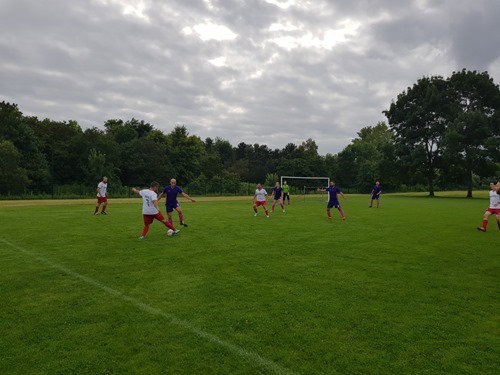 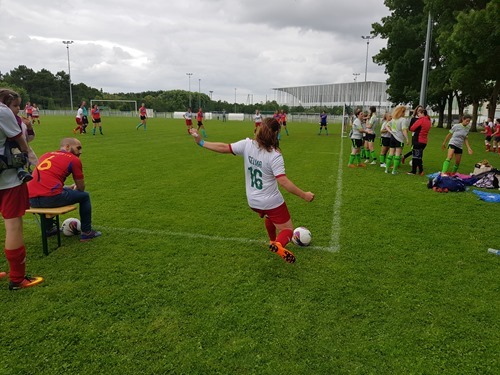 The two Neuchatel teams had similarly-designed kits, so it was nice to pair up with our counterparts for a quick photo. Here’s me with Coral, who also happens to be a good friend I’ve known for many years. 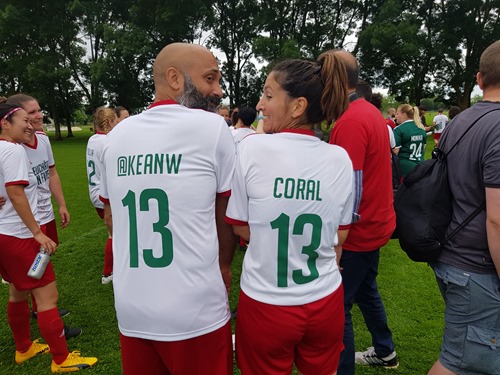 The front of the ladies’ shirts – and that of their coach, Antonio, who’s pictured below – was perhaps a little provocative. The team was called “Neuchatel On Fire” but a “d” had been added to the end for the sake of the shirts. It was meant to be a good-humoured comment on the office’s situation – it wasn’t done with any bitterness at all – and I hope it was taken in that vein. 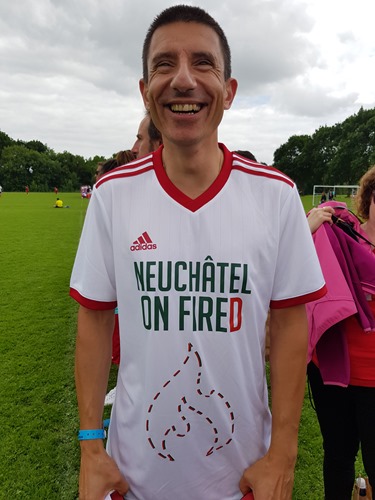 In the evening the awards ceremony was held at the Matmut Atlantique stadium – a gorgeous stadium designed by Swiss architects Herzog & De Meuron and home of the Girondins de Bordeaux. 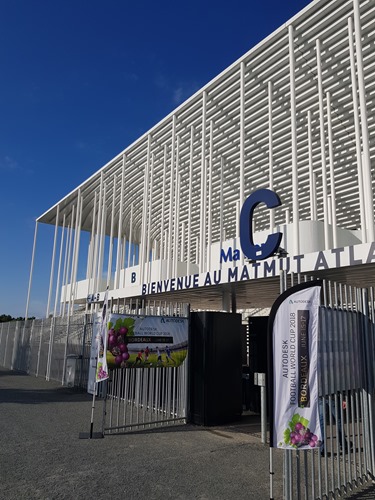 The ladies’ team came in at a very respectable 3rd place (in fact they’d beaten the 2nd place Barcelona team but lost to the 1st place Munich team during the group stages), while the men’s team came in at around the 6th or 7th place out of 29 (we were knocked out in the quarter finals by DCP United on penalties, so that means we were somewhere between 5th and 8th). The men’s competition was won by the excellent Barcelona team… a very well-deserved first victory for that office.

We’re really proud of our ladies: a year ago most of them had never played football, and they trained really hard, week in, week out, during the best part of a year in order to compete at a high-enough level. They did really well, and the men’s team all salutes you! 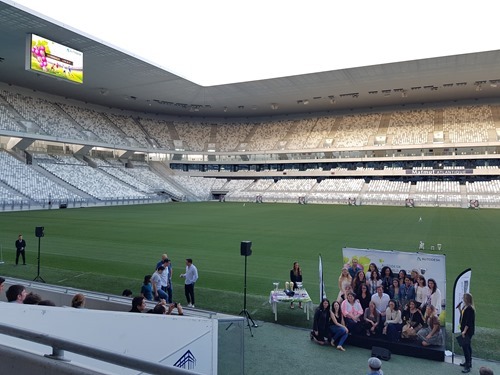 It was a very poignant event, being the last one Neuchatel (one of the founding teams of the tournament and a former winner) will participate in. It was a lovely weekend, but also very sad, knowing that within a matter of weeks most of the players will no longer be with the company. Some had already left the company officially a month or two ago, but came back to participate in this one last tournament. 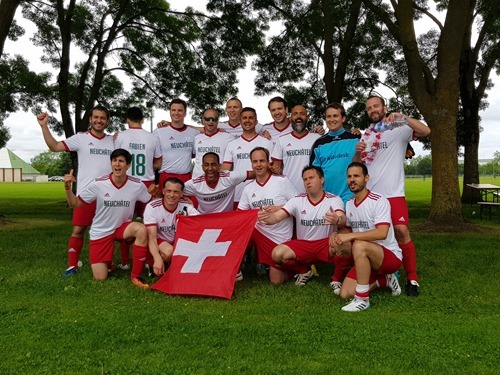 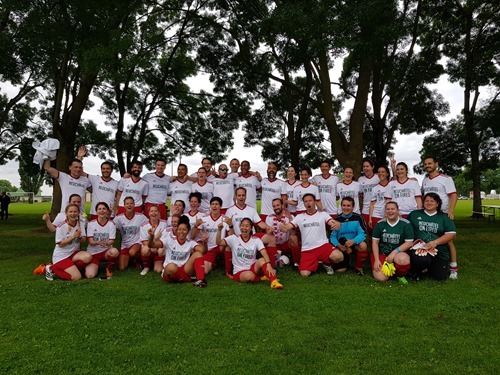 It was been an absolute privilege to have played (and worked) with such a fine group of people. Thanks to all of you for the laughs and for the friendship… the tournament (and Autodesk) won’t be the same without you.

I’m now in the UK for AU London, looking forward to watching England vs. Tunisia in tonight’s second Group G match. I really enjoyed watching Mexico play Germany and Switzerland draw with Brazil, last night, so let’s see what this evening has in store!