Today’s post was going to be “Enjoying England” – just to complete the series on our European tour – but that’s now going to have to wait. We are indeed enjoying England, but yesterday had a pretty unique and amazing opportunity that deserves a post of its own.

Before yesterday, I admittedly didn’t know very much at all about Shard London Bridge (which I’ll refer to from here on as “the Shard”). But then a friend of ours offered us the chance to go to the top, which was pretty unique (he’s been working on the project for the last 6+ years, and will soon be finishing up his part of it). One thing I certainly didn’t know was just how exposed we’d end up being, up there.

The Shard is an extremely impressive structure – and I’m sure our software was used in various places during its design and construction, although I have no specific knowledge of where and how – that is currently the tallest building in the EU. 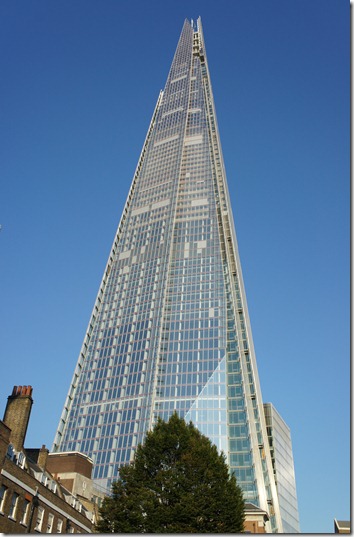 While the Shard is nearing completion, there’s still a lot of work going on, inside: we had to don protective clothing appropriate to a construction site before going up. We only entered at 5:45pm, and had to complete our visit before a scheduled power outage started at 7:00pm (walking down via the stairs is apparently not recommended, understandably enough ;-), so we were on a fairly tight schedule.

The first lift took us up to the 32nd floor, where we changed for a second lift that took us to the 68th. This is the floor that will contain the publicly accessible restaurant – and allow people access to the viewing gallery from 69 to 71 – and the view was admittedly pretty stunning from there. On this visit, however, we were able to climb stairs to the 84th, the highest physical floor in the tower.

Now I have a bit of an issue with heights – I had enough problems with being at the top of the Phare de Trézien, last week – so this was no mean feat, for me. Especially at the higher levels of the Shard, where – given the openness afforded by the gaps where the shard fragments meet – you’re really exposed: 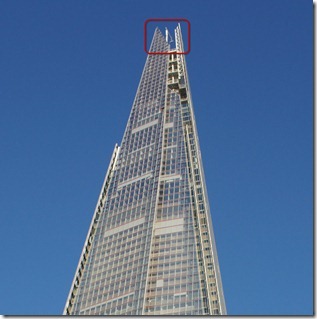 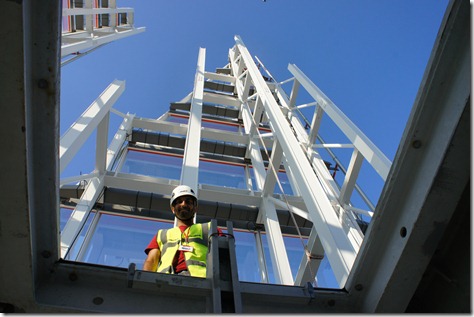 I’d heard an urban myth about the damage that would be caused by a penny being dropped from the Empire State Building – and heard a similar story yesterday regarding a washer falling during construction that ended up embedded in the concrete floor of London Bridge station, below – but I honestly don’t know enough about the physics involved to know how much was true. I certainly held on tightly to my camera, I can tell you! :-)

And yes, the view was predictably stunning, especially as we’d been luckily enough to make the visit on a clear day: 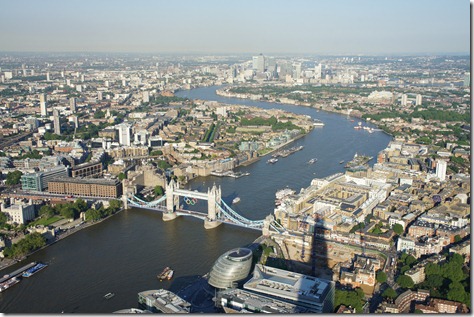