Morgan at the Geneva Motor Show 2015

I headed over to Geneva yesterday afternoon for the first press day of this year’s Geneva Motor Show. I was there courtesy of our friends at the Morgan Motor Company who launched their new Aero 8 (it was actually nice being there as a guest, in contrast to last year’s collaboration). Here’s the launch video for this exciting car:

I love this video, but I did have one minor gripe for the Morgan team: why was Jon Wells, Morgan’s Head of Design, shaving a piece of clay rather than using Autodesk tools to develop the design? I was joking – I can understand why for the aesthetics of the video they’d rather focus on the analog aspects of the process – but they did explain they had in fact shot footage of our tools being used but it had ended up on the cutting room floor (or whatever the virtual equivalent is). Understandably they just had too much great material for a video lasting 2 minutes and change.

I was just happy to know they’d used Autodesk software to help design this gorgeous vehicle. 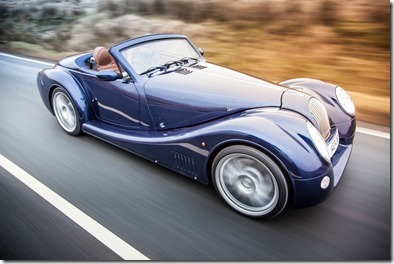 In case anyone’s wondering how much this car costs… and my apologies if we’re getting into “product placement” territory, but I’m sure people are curious…

The previously generation of the Aero retailed at around £130K, but Morgan has worked hard to streamline the BOM so the base Aero 8 model now costs a touch under £58K excluding VAT (£66.5K including VAT). It seems as though this is being sold in the US at $130K (including a number of options not included in the base UK model). Full prices are here.

Something I hadn’t realised: Morgan now has a partnership with The Balvenie (one of my favourite Scotch whiskeys). During the evening, James Buntin, Brand Ambassador for The Balvenie, led a tasting session on the Morgan stand. Here’s a video describing some background to The Balvenie’s collaboration with Morgan. It also does a great job of painting a picture of Morgan as a company, something I didn’t do justice in the blog post describing my own factory visit.

Struthers London were also present on the stand: they’re the London-based watchmakers who hand-make the co-branded Morgan watches. They launched the Aero 8 edition of the Struthers for Morgan line at the show.

So did I place my order for an Aero 8 while I was there? No, I didn’t, although I do expect a lot more people to be interested in the car given the new pricing model. The first 5 or so minutes of this class from AU 2015 might help explain why I’m not in the market for one…