Autodesk and Morgan at the Geneva Motor Show

Yesterday I had a really interesting day. I spent it at Geneva’s Palexpo exhibition centre, helping Morgan Motor Company set up their stand for this year’s Salon International de l”Auto & Accessoires (i.e. the 84th Geneva Motor Show). It was really cool being there before even the press were allowed in (they get to attend today and tomorrow), while most of the cars were still under wraps: 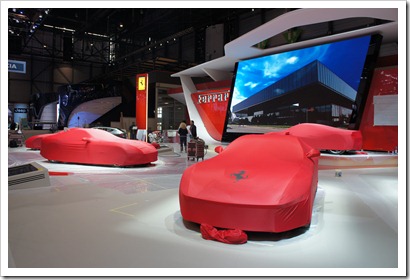 I’ve been to the show – and visited the Morgan stand – before, but this year was very exciting for me as it marks the culmination of some months of collaboration between Morgan and Autodesk. This particular project had its genesis back in late August, when Jon Wells and I were chatting “off the record” after the interview I posted on this blog.

Jon expressed an interest in Autodesk helping put together a car configurator for their stand at the 2014 show, focusing particularly on the Morgan 3 Wheeler. I followed up with a few people internally – particularly with people who have worked on our Showcase product – but it wasn’t until Callan Carpenter (Autodesk’s VP of Global Services) visited Neuchatel in late September that I found out that our Consulting division had technology that looked like a great fit for Morgan’s requirements.

Of course there’s more to it than that (and probably much more went on than I had any idea of), but still: it’s at least part of the overall story.

So to cut a long story short, members of the Visualization team in Autodesk Consulting – headed up by Kevin Smith, an old friend and colleague – created a configurator based on Autodesk VRED that allows users to configure their dream Morgan 3 Wheeler based on the array of options available to them with the 2014 model.

There were some interesting challenges in this project: one of Morgan’s key selling points is the extreme personalization possible with their “bespoke” cars. For instance, for a modest premium you can basically choose any colour you want for your new Morgan’s paintwork.

Kevin’s team – Merten Stroetzel, Jeff Wilson and Jason Walter – developed a state-ofthe-art configurator for the 3 Wheeler. They took a primarily cloud-based system (known as Project Ansel internally) and created a locally-run configurator with features such as a colour picker for paint selection from the full colour spectrum.

The configurator makes use of an iPad as the primary input device – you use it to select colours for the pain and the leather as well as the various decals and options available to you – with the results generated in close to realtime and displayed on the wall-mounted screen.

A mouse can be used for finer-grained navigation beyond the 6 standard views, as needed. Admittedly the system would have been much more responsive with a cloud-based cluster doing the raytracing – there were a number of constraints that led us down the path of delivering a local implementation – but the results with an 8-core laptop doing all the rendering were pretty tolerable, considering.

Here’s the set-up in the stand: 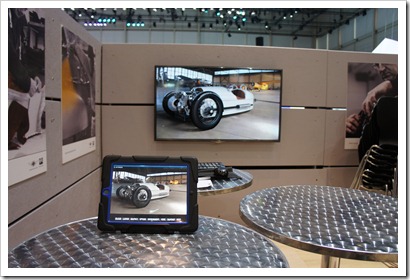 Here’s one of the more interesting configurations I generated while playing around with it: 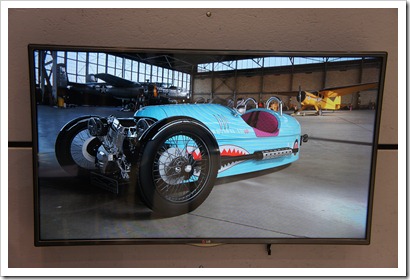 Just to re-iterate a point: these images are based on full 3D models – with some really impressing HDR background imagery – allowing you to capture high quality rendered images from any direction you choose. The interiors look simply gorgeous: 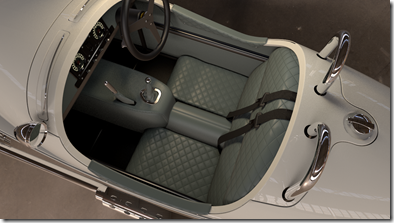 You can choose between a studio environment, a hangar (the default, used above), and the Potsdamer Platz in Berlin by either day or by night. The nighttime scene is just awesome: you even get to see the 3 Wheeler with its light on! 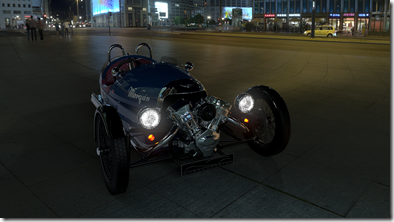 Hats off to Kevin, Merten, Jason and Jeff, as well as to Mike Russell from our Sales team for making this happen (my own part in this story was very minor, but it was great to have been involved). Without putting too fine a point on it, Morgan has one of the more interesting pieces of car configuration technology on display at this year’s show. I’m certainly excited to see how it’s received by potential Morgan owners over the coming days.