An interview with Jon Wells – Part 2

This is the second part of the two-part interview with Morgan Motor Company’s Head of Design, Jon Wells. Here’s the first part, in case you missed it.

How long has Morgan been using Autodesk software?

I introduced Autodesk software to the company when I joined. I was the link between the aesthetic designer that had just joined the company – who was very visual-based – and the engineering team. With my technical background and understanding of 3D and surfacing, I was able to understand both the aesthetics and how that would interpret into an actual, physical component. And to enable me to do my job properly, I wanted to use the software that I’d been trained in and taught me what I know. 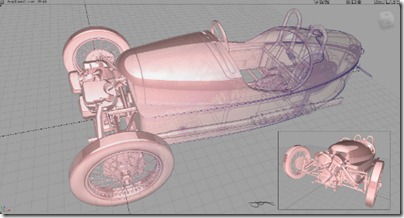 So I suggested to the company that they got Alias and we bought our first two seats, and straightaway it was a massive success. We were able to take these designs, present them, visualize them in real-time in 3D, give the engineers and the guy on the shop floor hard data to look at, that we could create within the design department, and just get more confident sign-off. And also provide more accurate data to move the project along quicker. That was when I started… I was in my third year at University, during a work placement we brought that in… it’s been nearly 7 years now.

Which suite are you using?

We’re using Autodesk Design Suite Ultimate. With that we have AutoCAD, Showcase, Alias, 3ds Max… we have the plug-ins like Falcon and bits and pieces, but they’re not part of the suite. 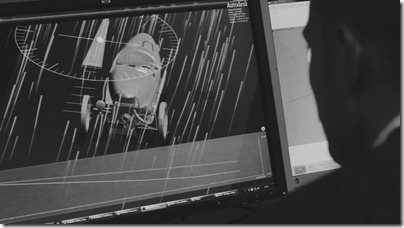 Alias we live on. We do everything in Alias, whenever we get the opportunity to. It’s just so quick, so flexible and so accurate. So we use Alias as much as possible. We present, render and display all our ideas that are quick when we need to show something to the shop floor or to the other engineers or directors quickly, we use Showcase for that.

But quite often print deadlines, for things like brochures and marketing materials, precede us actually having final cars built before a show. So quite often we’re reliant on digital media to sell our products before there’s an actual car to photograph. And in that situation we then use something like 3ds Max with iray or V-Ray to do some really high quality renderings and visuals which we then use for our publicity materials. So 3ds Max comes into it quite a lot, too. And also occasionally we’ll animate things, where we use 3ds Max, too. They’re the three programs we live on, really. 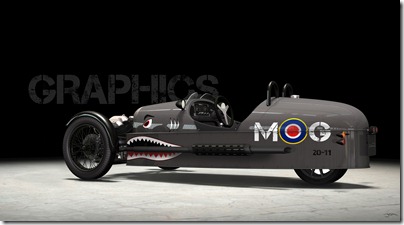 Do you also use AutoCAD much?

We use AutoCAD mainly for some of the technical drawings when we’re relaying things to the shop floor. We have a few large-scale plotters around the site that we use to print off diagrams and dimensions. A lot of guys here still prefer to look at a bit of paper rather than a screen, so we use that for some of the more technical drawings, adding measurements and details. Not too heavily in my department, but occasionally. I use it every so often.

You’re a young designer who originally brought a software tool in with you, as you joined a company. With that in mind, how important is it for software providers to make their tools easily available to students?

From my point of view it’s the single most important thing to do. I think that companies like Morgan especially will look at new, young, emerging talent to try and stay on top of the game. So if they can see guys bringing in new software that’s enabling them to do a really good, radical job and massively improve the efficiency of their workflow, they’re definitely going to take that software very seriously. So in my point of view it’s a fantastic way of opening up new markets. That’s certainly how I got my job. 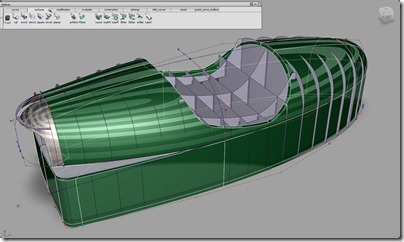 Autodesk is going through a transition related to Education, where we’re really making our software much more easily available to full-time students.

I think it’s really important. It’s also really important for designers as individuals – it’s not just a way to get a job in a company, because you can provide some data – it’s a really nice way to design and work, and actually visualize your ideas and imagine things, you know? That’s going to happen when you’re younger and you’re less constricted by the constraints of workflows and money and budgets and what you can and can’t do because the engineers are telling you so. When you’re really imaginative and you’re at your peak of just designing and creating and going through those initial inspiration years, I think to have a tool to enable you to do that better is really important, as well. And you immediately get a lot of value from that software. 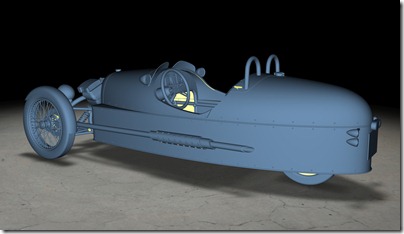 You mentioned that you have a fairly iterative approach for issues that are bubbled up from the shop floor. How often are you revising designs for an existing car?

We do significant new model year vehicles, like any car company: we have a model year 2013, 2014… the changes I’m talking about can be very minor to improve production efficiency. Occasionally if a few of these things amass as general constant things that could be improved, that are actually quite sizeable, that are going to change the enjoyment of the customer and the quality for the customer, then we go “right, let’s put some proper thought and time into this” and we develop that as a project and we’ll either release it as an update or just put it into the next model year vehicles. That does happen, that constantly happens, really. It’s just the nature of a hand-made product, though. It’s hand-made, so it’s going to evolve. 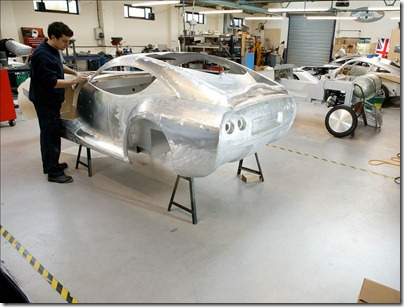 I’ve heard sustainability mentioned a fair amount with respect to Morgan. That’s obviously a focus many people have, these days, and it’s certainly something that’s very important to Autodesk as a company. I’ve heard that a large proportion of the Morgan cars ever made are still on the road.

Oh yes, masses! They typically tend to stay within families, they’re passed on. Or resold for good value, later on because they don’t lose their money and people are less inclined to scrap a car if it’s worth quite a lot. The lifespan of the vehicle is so long, that in itself is a very sustainable attribute to have. I mean you can drive a car like a Prius, or something, that may have amazing zero emissions – or low emissions – but the batteries and all of the mass manufacture that go into that car, when you do recycle it after not so long then it’s very hazardous and very damaging to the environment. That combined with actually building it and the energy that goes into making that car, when you look at all these different things, at the plastics and the batteries and the way the car’s made, it actually has quite a big impact. Whereas for us, everything’s sourced very locally, we have a very localized carbon footprint, it’s assembled by hand with no machinery, the factory is very low-energy, the cars are kept for a long time, they’re very lightweight but using efficient engines, the emissions are good… you put all these things together and the whole general picture of the vehicle means you can drive a V8 with a fairly clean conscience (laughs).  Which I quite like: I think I’d rather do that than drive a Prius (laughs). Yes, so I think it’s a very eco-friendly company, in that sense. 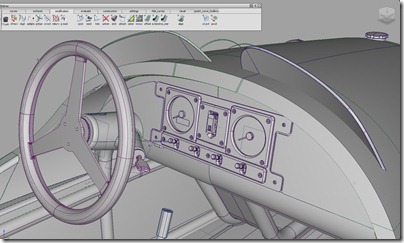 How much plastic is used in a typical Morgan? I know there’s the euro-fighter bomb release switch to start the 3 Wheeler… :-)

Very little, very little. There’s going to be a bit of switch gear, a few buttons. A couple of components on door handles, maybe? But we have no B-surfaces that are plastic, we have no inner structure that’s plastic. It’s all aluminium, wood and leather, really. Not much else, that’s pretty much it. It’s just small detail components. Which are components that are built off the shelf, so they’re made in mass, somewhere. We’re not tooling up and putting a great amount of energy into that, we’re just buying them off the shelf. And they work. Really well.

So what car do you drive?

That’s a good question (laughs). I chop and change: I live about an hour away and I drive a fairly modern BMW Coupe at the moment. Which is nice, it’s good – it gets me up and down the motorway. And then it’s motorbikes! But I’ve had old Land Rovers, Ford Capris, VW Golfs, all sorts of random stuff, really. 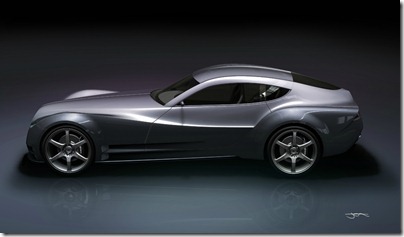 In any case you get to drive Morgans regularly.

Well this is it: people always ask me, “do you have your own Morgan?” and I say “well, no: sometimes I fancy an Aero, sometimes I fancy a 3 Wheeler” (laughs). It’s easier to just take them home. Now that being said, next year, I may well buy myself a narrow-bodied Plus 4: that’s what I’d quite like to drive. So the 2-litre with a narrow 1.6’s body on it. Small and spritely but still quite powerful. I think I’ll get into one of those, next year. Just for a while – just for the summer months (laughs).

Is it a car you could drive all year round?

Yeah, you can. Modern Ford engine, weighs nothing, they go forever. The Classics are just brilliant, to be honest with you. You can’t fault them. Really good, usable cars. I mean they get a bit windy, sometimes, when it’s really cold and wet outside, bits flap around a bit, you might get the odd little water drip in your face, but nothing to be concerned about. (smiling)

Unlike 3 Wheelers they have heaters…

They have heaters, air-con and all the rest of it. They’re quite comfortable, actually. I’ve done a lot of miles in one. Once we went over to Milan for Design Week, a few years ago – when that Icelandic volcano blew up and all the flights we grounded. We had a really dear friend of ours leaving Morgan the evening we were supposed to get back. He was having his leaving do and we just had to be there. We were with our Italian dealer, down there, and asked “you don’t have any cars going back to the factory, anytime soon?” He said, “Actually I do, I’ve got a Roadster.” So we did Milan to Birmingham City Centre in 12 hours. We just didn’t stop. It actually felt quite good. When we left Milan we had the roof down, and we’d down three quarters of the journey with it down. We’d gotten a bit cold and miserable in some of the Swiss passes and tunnels, but then we thought “what the heck, we’re going to do this all the way.” So we pulled up at midnight in Birmingham with the roof down.

So they’re very usable. If two guys can jump in a car and do that in it, it says a lot, really. It was soaked and we were soaked, but it was a good run, nonetheless.

It wasn’t a car that was then going to be delivered to a customer, I hope!

No, thankfully, not! It was one of our cars, actually. It was fine though: they’re built for that. They do take their dose pretty well. That’s it for this two-part interview with Jon Wells (LinkedIn, Twitter). A huge thanks to Jon for taking the time to talk to me and to all at Morgan Motor Company for doing what they do.