« Octobers Plugin of the Month: BrowsePhotosynth for AutoCAD | Main | Some impressive technology »

Capturing a point cloud of a monument using a laser scanner

In this previous post I attempted to capture the geometry of a monument close to my home with approximately 500 photographs imported into Photosynth (and October’s Plugin of Month to bring it into AutoCAD, of course :-). As promised in that post, I managed to find time this weekend to go back down with a FARO Photon 120 laser scanner (which I’d mentioned in this previous post) to capture the same monument using a different technology: a 3D laser scanner.

The first thing to note was there was a lot more to carry: 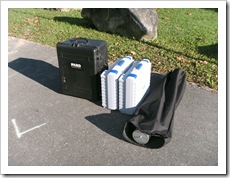 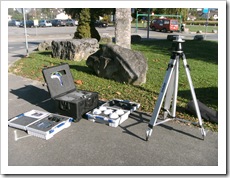 Which clearly resulted in a much fancier-looking setup: 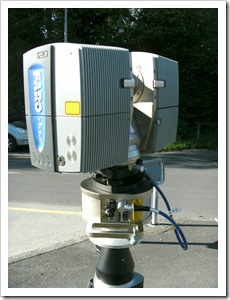 What was fun about scanning near a road was the way the cars slowed down in case I was actually manning a speed camera. :-) Well, either that or they were just curious about what I was up to.

As I wanted to take – and combine – a number of scans of the monument from different angles, I placed 5 reference balls such that (hopefully) 3 would be visible from each scan (see the white balls, below): 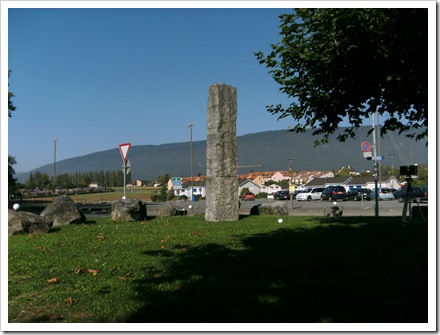 The scanner had been configured to save the scans to the local harddrive. In fact we’d taken some trouble to get the scanner configured properly: Bodo Vahldieck, an old friend and colleague of mine from the Localization team based in Neuchâtel, had come down a few evenings before to run some test scans with the scanner connected to a PC: 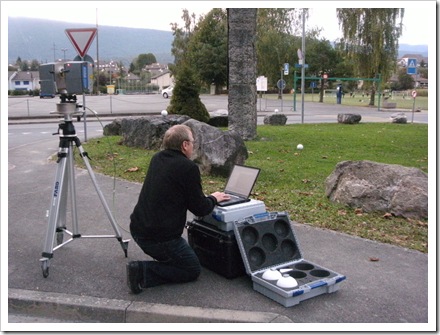 As we’re both relative novices with this equipment, it took us some work to get to the point where we could reliably run scans without being able to see the results. And despite Bodo’s (and to some degree my) efforts, the first scan I took managed to miss the monument completely! Here’s the preview image generated by the scanner (which incidentally takes about as long as the scan itself):

As by this point the scan was not being previewed on a PC, I ended up not realising that the critical “full frontal” scan was missing from my set. :-(

Ah well. I did manage to take 3 more scans from different angles which did include the monument:

I now have several gigabytes of point cloud data that I need to process. My current PC, running 32-bit Vista with pretty inadequate system resources (disk-space, RAM, you name it) is struggling to manage.

My plan was to use the FARO Scene software provided with the scanner to extract the reference locations and stitch the clouds together, but we’ll see if I get there.

In the meantime, I did bring the first cloud into AutoCAD 2011 directly by indexing the FLS into a PCG and attaching it: 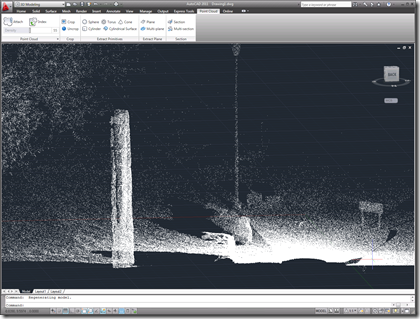 It’s the school holidays, here in Switzerland, so I’ll be off blogging for a few days. I’ll be visiting the Museum of Transport in Luzern, so perhaps I’ll have a few images from there to upload into Photosynth. :-)