Capturing a point cloud of a monument using Photosynth

A couple of weekends ago, shortly after returning from our trip to the States, I walked down to the area of Lake Neuchâtel that’s nearest our house, called La Tène (which is now also the name of our local commune (or municipality), which was recently created as a result of fusing Marin-Epagnier with Thielle-Wavre… thankfully they didn’t call it Marin-Epagnier-Thielle-Wavre ;-). On the way I stopped off to take a few photos of a local monument. 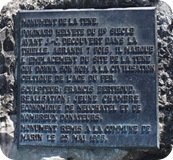 La Tène culture is apparently quite famous in archeological circles, and the monument itself is pretty cool. It’s a replica of an Iron Age sword found in the area, but seven times the original size and mounted on a monolith. Here’s the monument’s plaque, for all you French-speakers:

Anyway, I ended up taking more than a few (in the end I took 497!) 12.1 megapixel images of this monument, and uploaded them to Photosynth. I wasn’t expecting much: Photosynth warned me I was uploading a lot of pictures and that the synth process could very well fail. I was also aware that Photosynth’s synther only uses 2 megapixel (or lower) versions of the images, but I decided to go ahead and upload the full-sized images, anyway.

Here are the results:

Here is the Photosynth’s point cloud imported into AutoCAD 2011, which I brought in using the application in this previous post (which I expect to become a Plugin of the Month in October, all being well): 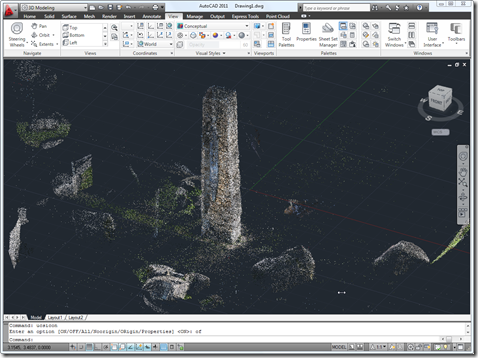 I’ve been trying to upload this same data-set to Photofly via Photo Scene Editor, but have been having trouble getting the full scene created. If I manage to complete that I’ll present the results from Photofly in a separate post. And then hopefully the results of using the laser scanner, too, although only if the sun comes back out (it really feels as though summer is already over here in Switzerland :-( ).