Lots of exposure to "laser" technology

I’ve had quite a lot of contact with “laser” technology over the last few weeks. (In case you’re wondering about the quotation marks, that’s just a little nod to Mike Myers’ fantastic Dr. Evil character, who in the Austin Powers movies refers to now-commonplace terms – such as laser – with finger quotes. :-)

A few weeks ago our friends at FARO sent across a Photon 120 laser scanner to our office in Neuchâtel, and we’ve just started getting to grips with it (if you want to see more advanced use of this technology, be sure to check out this ADN DevCast). The first thing you tend to do with a scanner is to scan the room you’re in, which is about as much as we’ve done with it until now, but I expect to scan more interesting subjects when back from San Francisco. I especially want to compare and contrast the use of laser scanning with photogrammetry/computer vision techniques, to see the relative advantages of each technology. 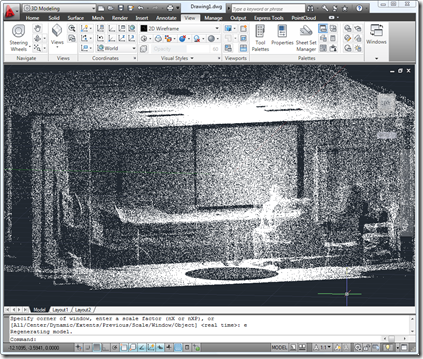 In case you’re interested, there was a press release published last week regarding the use of FARO scanners with our software.

So that was before leaving Europe… the next exposure I’ve had to “lasers” (OK, OK, I’ll stop with the quotes :-) has been some follow-up eye surgery, performed last week. I had very bad eyes, growing up – probably not helped by too many late night coding sessions – and I ended up getting LASIK before moving from the US to India, 7 years ago. Because I had a quite sizeable correction performed on each eye, I’ve needed glasses in recent years to correct a much more minor case of short-sightedness than I once had, which was fine (I actually quite like wearing glasses, truth be told, I just don’t like being dependent on them). But as we were planning to be back in San Francisco for a few weeks, this summer, it seemed a good time to head back to the place I’d first had my eyes done to get a “touch up” surgery.

Anyway, that’s what I did last Wednesday, during my vacation. It turns out that for follow-up treatments there’s a fairly high risk (perhaps as much as 20-30%) of complications if using traditional LASIK, so we opted to go for PRK, instead. Rather than needing corneal tissue flapped back for the laser to work more deeply on the cornea, PRK works directly on the outer surface of the cornea (the eyeball itself, basically). The procedure itself is very low risk, but the healing process is often longer and more painful (and I can vouch that this is true, although I’m hopefully through the worst of it, at this stage). It’ll probably be a few more weeks before my vision is better than before the surgery (right now I’m squinting through quite bleary eyes at the screen), but I have faith it’ll work out.

I do expect to post something more technical later this week – I have a few bits of code I want to share – but I think it’ll still be a few days before I can focus on code long enough to write anything interesting. We’ll see.