« VASA 0.2.0 is now available | Main | Learn about Autodesk Construction Cloud and its API »

Last week I mentioned the release of VASA 0.2.0, which includes some new nodes and samples that raise some really interesting possibilities. I couldn’t help but come back to the “sensor coverage” sample (named 12-VASA-Sensor-Coverage.dyn), in particular, as I can see so many possibilities for its use.

Here’s the description Rhys Goldstein included in the sample:

A demonstration of how to combine sample point generation and proximity operations to select locations on walls and ceilings using the Voxel-based Architectural Space Analysis (VASA) package. In this example, the locations are used to place sensors and approximate their coverage.

First, sample points are generated using a path model and a set of parameters. The points are filtered to include only indoor locations.

Finally, the remaining points are used to place ceiling-mounted sensors, each with a downward oriented conical volume of coverage.

If you open up the sample you will see wall- and ceiling-mounted sensors placed throughout a building. Here’s an animation showing the selective display of the sensor locations themselves and the coverage cones, for wall sensors, ceiling sensors and then both together.

You can easily vary the parameters for the point sampling leading to the location of sensors. You can see the distribution being impacted by parameter changes.

Here you can see how parameter changes can affect the calculation of coverage cones for ceiling sensors (try saying that quickly).

I won’t dig more into the specifics of the sample’s implementation, in this post: to give it a try for yourself you can install Dynamo Sandbox (or just use Dynamo for Revit), install VASA 0.2.0 or higher from the Dynamo Package Manager (using Packages –> Search for a Package) and then open the sample file (12-VASA-Sensor-Coverage.dyn). As a reminder, you can find the samples folder by opening the VASA package’s root folder from the Dynamo preferences… the sample is in the extra sub-folder. 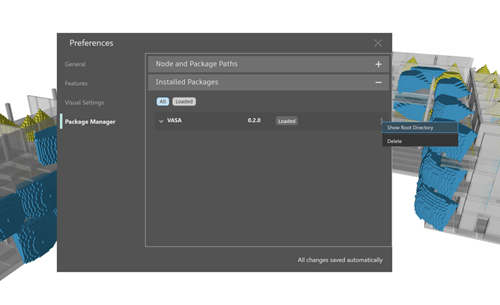 This sample seems ripe for use as part of a generative design workflow: the inputs to the graph that place sensors could be modified by the generative design feature inside Revit, while metrics could be introduced that  measure the effectiveness of the placement. VASA has ready-to-use nodes that can count the voxels in a voxel model, something that would give you a numeric assessment of relative coverage of a space by a set of sensors.
An interesting trade-off to explore would be between the number of sensors (which you might want to minimise to keep costs down) versus the coverage in a space (as measured by counting voxels from the sensor cones).
There’s some really interesting potential here, I’m sure you’ll agree!