As many of you will have heard on social media, Autodesk turns 40 this year.

More specifically this coming Monday, January 30th, is the 40th anniversary of the original organizational meeting held at John Walker’s former home in Mill Valley, California. (You can find details in this recent post from John.)

The anniversary of Autodesk’s official incorporation and initial stock distribution is on April 26th, but Autodesk as an informal entity already existed from the end of January. Although the company wasn’t called Autodesk at that point, as that wasn’t fixed until some time in April… among the other candidate names under somewhat-serious consideration were Command Line Technology and Coders of the Lost Spark. How different things might have been!

In April of 1982 the name Autodesk still referred to a software tool referred to as an “instant filing system”. Autodesk as a company name was seemingly a placeholder that ended up sticking for lack of a better alternative.

I love this quote from Information Letter 4:

At the March 16 meeting we reached a pseudo-consensus on an unsatisfactory name for the corporation (Autodesk Inc.), but by the weekend the consensus seemed to have fallen apart. On this crucial question no one is satisfied, but everyone feels burned out. So we're going to file the Articles of Incorporation in a few days, using the name INSIGHT AUTOMATION LTD unless (1) the state disallows it or (2) someone comes up with the perfect name in the next 5 or 6 days.

It seems that by April 26th something had happened to have the company settle on the “unsatisfactory” option of Autodesk, Inc. (whether Insight Automation Ltd. was disallowed, or the level of burn-out led to people finally rolling over and accepting it). In any case, the initial stock distribution was in the name of Autodesk, Inc. and the rest, as they say, is history.

I’ll be co-hosting the event, bringing along my oldest piece of Autodesk memorabilia: 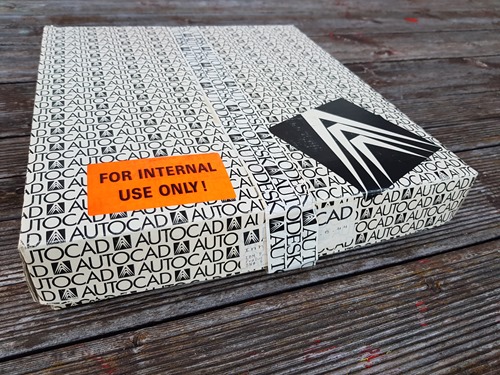 If you want to get in the mood, in the meantime, then you might want to check out my 4-part interview of John Walker from 2008, and Floppy Friday #22 which shows some of John’s early home computing experiments – one showing a rudimentary neural network – running on a Commodore 64.

See you on Friday. And remember, life begins at 40!