Going viral during a pandemic

I’ve been getting quite a bit of unsolicited email of late. It started with this one, in late July:

Hi Kean,
Did you know that a QR code of your email address is currently being
circulated all around the globe in a viral meme?
Cheers,

It came with a couple of images attached: 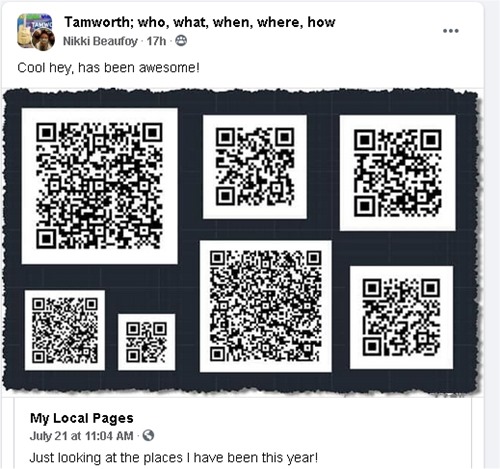 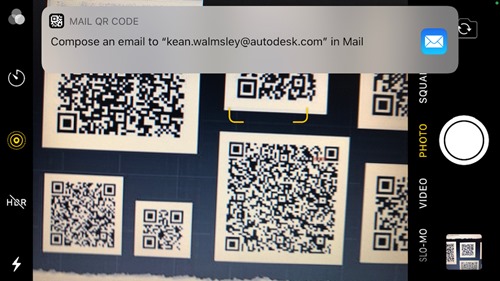 Perhaps somewhat rudely I largely ignored it, as I thought it was some elaborate spam or phishing attempt. I did scan the QR codes and found some curious things encoded: my email address, the URL to blogs.autodesk.com, my old Autodesk office phone number, the location of said office, my contact information (with the old phone number, thankfully), and a couple of notes with random(ish) text. I wasn’t especially concerned, as it was all information that was either public information or no longer relevant. A bit weird that someone would take the time to encode my information in a meme, but hey. No big deal.

But the emails kept coming. What was a bit strange was that several came from people in the Netherlands, the only country I’ve visited in the last year and a half. 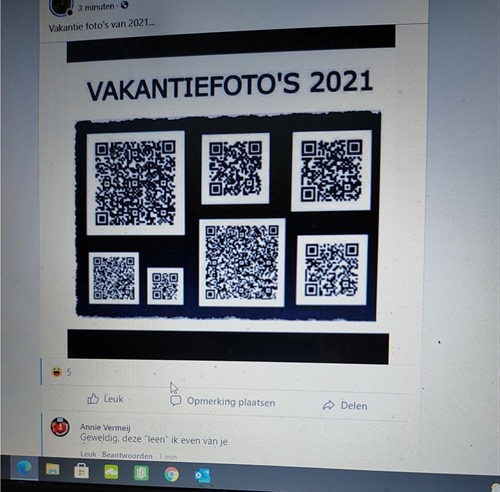 As far as I could tell, someone was sharing the image as this year’s “vacation photos”, which I assume is funny because people haven’t travelled much during 2021. I still don’t quite get the joke, but I guess the QR codes with a white border look a bit like photos, and the only travel we’ve been doing is digital? If someone can explain better what (if anything) they find entertaining about it, I’d actually really appreciate knowing.

I received quite a few “testing” emails, but also a few messages of thanks from people who thought I’d started the meme myself:

It was great fun receiving the scribbled "photographs" and wondered what they really would reveal.

Thank you from The Netherlands.

This one was a bit surreal:

Kem Kang is shamelessly promoting your business through your Q code icon.

Promoting my business? How dare they!?!

A few more people sent through versions of it: 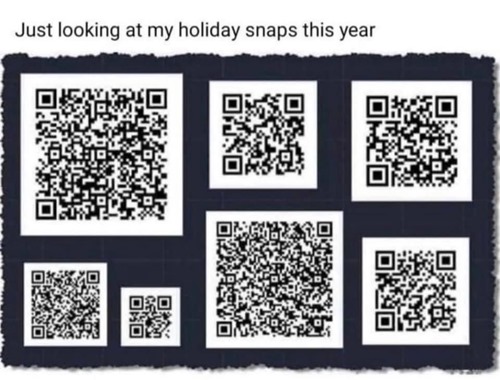 I even saw it shared on LinkedIn: 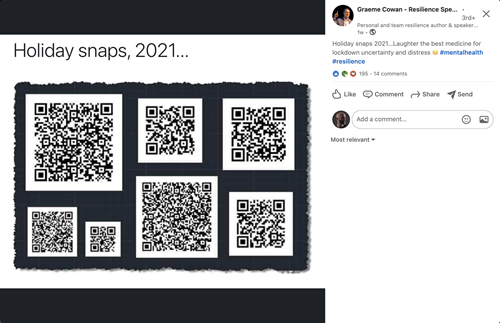 By this point I was starting to wonder how and why someone would target me like this. After chatting about it with my friend Simon Breslav – who really became curious about this whole scenario – I even grilled my 17-year-old son, in case he did it to wind me up (even though I knew he wouldn’t have). Simon was convinced it was by someone I knew; from my side I was less sure.

On another call with Simon we started doing a little forensic analysis using Google Image Search to determine when it was first shared (it wasn’t much help, frankly, as it doesn’t always do a great job indexing the ever-shifting sands of social media). At some point during the call I ended up zooming into the image to take a closer look, something I’m now amazed I hadn’t done sooner…

The penny finally dropped when I realised the image’s background was AutoCAD’s drawing canvas.

“Hold on a minute… QR codes inside AutoCAD? That rings a bell.”

A quick search on my blog uncovered a post I’d published 11 years ago, where I’d used a simple tool (which now that I think about it was published as a “Plugin of the Month”, after some enhancements by Augusto) to embed some sample QR codes into an AutoCAD drawing. To show the different capabilities I’d embedded an email address, a URL, a location, some contact details, some notes… you get the picture. 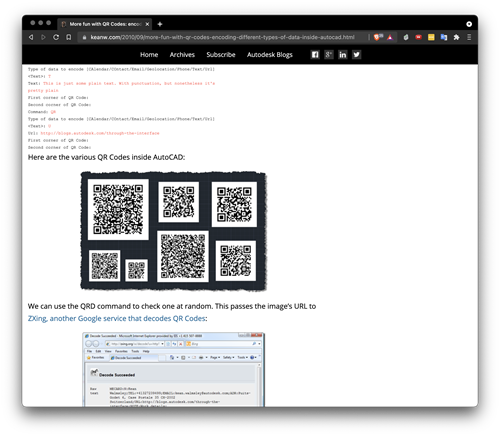 Clearly, for whatever reason, someone had either been searching for an image of QR codes for a meme, or had stumbled across the post (some of my MX3D posts did get shared a lot with people in the Netherlands, after all) and had just decided to create one with it. I don’t even know whether they scanned the codes to see what they contained.

Simon did speculate – mainly because neither of us could really understand why people found it in any way amusing – that perhaps the meme was AI-generated. How hard would it be to have a bot auto-generate memes and flood social media with them using fake accounts, just to see what resonated with people? The cost of sending out such memes – like spam emails – would basically be zero, and presumably someone would find a way to derive some financial benefit of seeing stuff go viral. In fact I sometimes wonder whether the memes we see on social media aren’t largely AI-generated.

For those of you who are interested, it turns out you can use AI to auto-generate versions of existing memes using this tool. Most are pretty awful, but occasionally they make some vague sense: 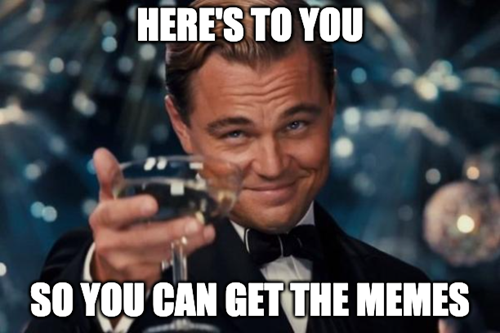 So that’s my story of how an obscure 11-year-old blog post ended up leading to a “viral” (probably a big word for something seen by some hundreds of people) meme. I hope you enjoyed it more than the meme itself!