December’s Plugin of the Month live on Autodesk Labs: QR Codes for AutoCAD

As promised and reported on, and then announced by Scott on his blog, the QR Codes application for AutoCAD is now live on Autodesk Labs as December’s Plugin of the Month. You may have seen my original implementation, but it’s come a long way thanks to the efforts of Augusto Gonçalves, a member of DevTech based in São Paulo.

Download it and give it a try! And be sure to check out the accompanying source project, of course. :-)

Once loaded, you can use the QRGEN command (and it’s command-line counterpart, –QRGEN) to create a QR Code representing one of the following content types:

As we save the source data along with the hatch or raster image as XData, they can then be edited (even in later editing sessions) using QRED or –QRED.

Here’s an example of my contact information embedded in native (left) and online (right) QR Codes inside AutoCAD: 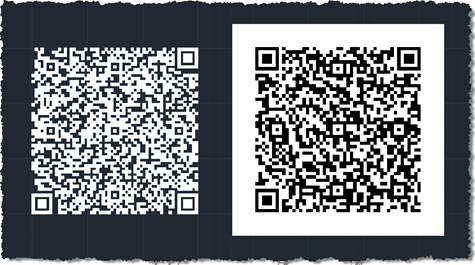 Now if you try and scan the left-hand image, you’ll probably fail: most QR Codes are black on a white background, while this is the opposite. That said, if you print them – or use a white background without a grid – then they should both work well:

You’ll notice the patterns are different: it’s like the Google Chart implementation uses a different error correction level (as described here and here), which would go some way to explaining that.

I’m really impressed with how Augusto as managed to make a complex QR Code out of a single solid-filled hatch: I had always imagined having to create lots of solids to do this, but apparently it wasn’t needed. Neat stuff.

As ever, please let us know what you think by posting a comment or dropping us an email.