« Come and work for Autodesk Research in Pier 9! | Main | Using the Forge viewer? Its time to switch to SVF2! »

As we’re in the middle of the 2021 Olympics – well, more honestly because I happened to stumble across the floppy it was on – this week’s episode is all about the sports-related games contained in The Ball Games Pack for the Commodore 64.

This compilation contains four games, one of which we played in Floppy Friday #36 (the classic Football Manager), so this week we just played the other three: Kick Off – a very decent yet fairly tricky soccer (yes, football) game – followed by Head Coach – a Football Manager-like game for American Football fans – and finally Golf Master (which also appears to have gone by the name of Challenge Golf).

It ended up being quite a long episode – despite seeing only three games – mainly because I had trouble working out how to exit practice mode in the first game. Sigh.

Here’s the cover art for this collection: 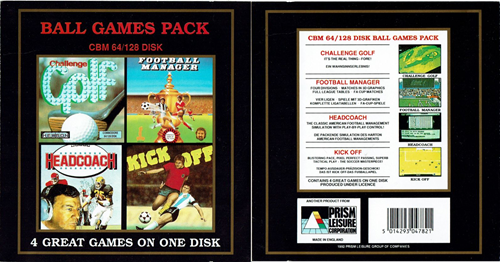 I may well stick with the sports theme for next week’s episode – there’s an “indoor sports” floppy that’s begging for me to try – but we’ll see what happens next week.