In this week’s episode we take a look at three more Commodore 64 games loaded from a random floppy disk I found amongst the collection. The first, Football Manager, is a stone-cold classic. Not the most visually interesting of games, but one that enthralled a generation.

The next two are on the stranger side. There’s Hunchback at the Olympics – which is a very, very quirky sequel in the Hunchback series – and then there’s Rocketball, which I’ve now found out was based on the movie Rollerball. It was set in 2010, so it’s another of those “where’s my hoverboard?” moments. It turns out you need to crouch down and pick up the ball, which is the key piece of knowledge I was missing to play this game.

The only one of these games that fell in the Zzap!64 years was the Hunchback one, and the review was harsh (but very fair): 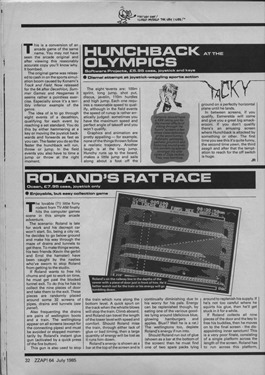 That’s it for this week. I’ll be pre-recording next week’s episode – as I’m travelling for most of the week – so there will be one as usual on Friday morning.