The new Types By Level panel in Project Dasher

Over the last month or so we’ve been focused on the benefits brought to Project Dasher by combining 2D heatmaps with our traditionally 3D view of the world.

We started by creating 2D heatmaps, making them resizable, adding lots of them inside Dasher, and then making them pinnable per-level, before introducing the idea of overlaying building systems information, too. Most recently we took a sneak peek at the topic of today’s post, a new UI that simplifies access to these 2D (and 3D) heatmaps.

The idea came up during a team meeting: as we realised we had this combinatorial explosion between levels of a building and the sensor types available for surface shading – and that it was cumbersome to find the combination you wanted via multiple dropdowns – the suggestion was made to visualise these combinations graphically via some kind of stacked card UI. My friend and colleague Mike Lee had done some prototyping for a different project that used THREE.js to display a series of images as stacked cards: he kindly shared his code with me, which certainly made building out this UI much simpler.

Here’s a screenshot of Mike’s prototype: 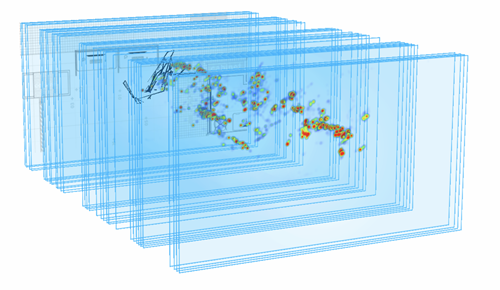 I had to find a way to render heatmaps for each sensor type/level combination to an image that could then be navigated through as a stack. A few things are worth mentioning about this implementation:

I’m very happy with how the feature has turned out, but it certainly wasn’t an easy one to implement.

Here’s how the overall navigation – which includes zoom and pan, as well as on-hover tooltips – works.

This panel appears (assuming it’s enabled in the user settings), when you launch the Surface Shading feature.

When you double-click the sensor type/level combination that interests you, the level will be navigated to in the 3D view, and the 2D heatmap for that combination will be displayed/pinned.

You can double-click a number of different options – to display them at the same time – and then select the final 3D heatmap to display by double-clicking the 2D heatmap that’s of interest. So this creates a simple (and hopefully compelling) way to choose between the various options available.

It also works for “level-less” models, although it’s at this point only really compelling if you have a certain number of sensor types available for surface shading:

I think this UI has a lot of potential for simplifying navigation and simultaneous display of various heatmaps, which is of great interest when correlating multiple data streams.

I’ll be talking about this more during my upcoming AU 2020 class (entitled “Lessons from Project Dasher: Building a Digital Twin Using Forge”), in case you’re interested in learning more about it.