A major update to Dasher 360; now showing the NEST building

Today’s a big day: Dasher360.com has been updated to let you browse the model and data coming from Empa’s amazing NEST building in Zürich, Switzerland. Head on over and give it a try! 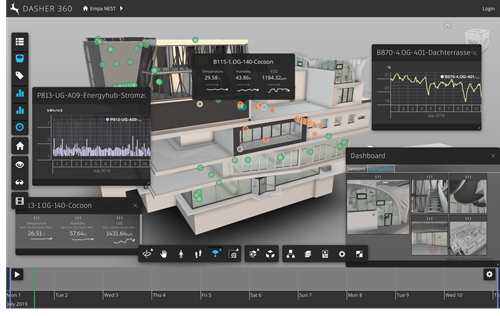 Here’s a quick video introducing the new Dasher 360 (you can also access this from the main Dasher 360 page):

Expect the model to improve, over time: we want to include a few additional units – such as the Urban Mining & Recycling unit – as well as increase the number of sensors and remove a few visual artifacts. But in all honesty it’s already super-cool, so all that’s just icing on the cake.

While we’ve been working to get the NEST model working well inside Dasher 360, we’ve also enhanced the tool in a number of key ways, especially with regards to better support for “equipment” (objects with multiple sensors) and dealing with display of data from a certain moment. Here’s an animation showing how various UI elements are coordinated with the timeline to show the data at the specific “current historical” point in time:

We’ve also enabled support for realtime data sent to the browser via WebSockets. This isn’t something you can use unless physically present on the local network, but the mechanism is in place and works well.

There are a bunch of other changes in this release that are “under the hood”:

The first two may be noticeable to an astute user, but the third is only really relevant if working directly with Dasher 360 on a project (something that isn’t currently possible… watch this space, though).

I’ll be talking more about the techniques, components and viewer extensions used in Dasher 360 at my upcoming AU 2019 class in Las Vegas, if you want to find out more. I’ll also be co-presenting on September 24th about the NEST project with Matthias Wasem from BIM Facility AG at the first BIM 360 Community event to be held in Switzerland, which is taking place inside the NEST building, appropriately enough.

A huge thanks to the various people involved in making this happen: Simon Breslav and Hali Larsen from the Dasher team (and our manager, Azam Khan, and his back-end team reporting to Alex Tessier), as well as Antonio Cocca and Matthias Wasem from BIM Facility and Reto Fricker and Reto Largo from NEST. And our cheerleader and motivator-in-chief, Philipp Mueller from Autodesk’s AEX team. It’s been a team effort to get here, and we hope you all appreciate the results. Do let us know, either way!