« The DBEI Hackathon in Edinburgh - can you hack it? | Main | A visit to Geneva with Brunet Saunier Architecture »

I feel as though I’ve been neglecting this blog: I’ve barely managed a post a week for several weeks, now: partly because of family holidays, but also because I’ve been heads-down on Dasher 360, working on a number of cool new features as well as shoring up some of our older code. Anyway, the kids are now back at school and I expect to have a lot more to talk about during the remaining months leading up to AU 2019.

For now I wanted to share some information about the Space Analysis package. Today’s post takes a look at a feature that’s been in the public package for some time. In a coming post I’ll focus on some more experimental features that we’re yet to publish relating to acoustics.

This post is about a new visibility-related capability: the ViewCone. This is an object that allows you to perform a more limited visibility analysis within a particular cone of view (i.e. from a point towards a direction with a specified field of view). This is very handy when analysing the view someone has from their desk, for instance. 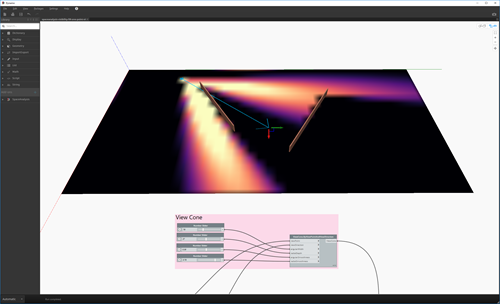 The object is easy to create, and has a number of parameters that will effect the results once used to create a ViewField. Here’s a quick animation showing what happens when you tweak the various parameters:

If you want to have a play with the Dynamo graph, you can get it from here. It only has cosmetic changes from the one posted with the Space Analysis package (it creates an arrow for the view direction and has thicker/higher walls, too), but it may still be of interest to people.

Incidentally, I’ve been using Dynamo Core 2.3 for today’s post. I strongly recommend getting a hold of it from DynamoBuilds.com. There are a number of important enhancements. I’m particularly excited about the team from the London Hackathon getting the API hooks they need to do runtime performance analysis of Dynamo graphs: that’s going to be an extremely useful tool, once completed. I’ll let people know as soon as I hear it’s available, of course!