I’m happy to announce that the recreation of Project Discover for Dynamo – what we’ve been referring to as Project Rediscover – is now available for download. I should point out that this is a first cut of the graph, and is definitely going to evolve over time: it’s a complex beast that uses advanced techniques – particularly on the metric calculation side of things – that we know we have to improve over time. But we did want to put this out there as an Alpha (or pre-Alpha) in advance of Autodesk University London 2019 to let people kick the tyres and better understand the principles it demonstrates. 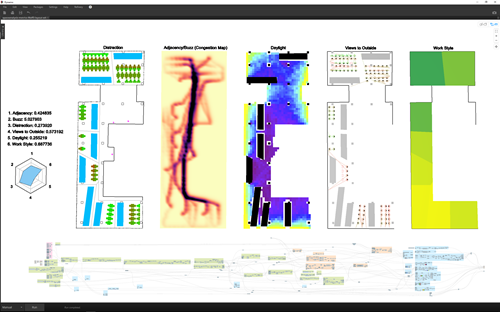 Firstly, though, I’d like to give a huge shout-out to Simon Breslav – who did most of the core work on the graph – and to Rhys Goldstein – who worked heavily on the C++ library that’s at the core of the Space Analysis package that the graph uses heavily. Without their hard work this graph would not have happened. (The graph also depends on the Dynamo Text package, so you’ll need to install both this and Space Analysis from the Dynamo Package Manager for the graph to execute without warnings.)

So, without further ado, here’s the link to the graph, which will be updated to point to the latest version, over time:

The geometry system included in the graph is a directly replication of the one used originally in Project Discover, but there are a few differences elsewhere, particularly in the metrics. For instance, we’re approximating daylight by raycasting within Dynamo to check whether rays from the sun in various locations hit cells in a grid or whether they’re obscured by walls or other barriers. This allows us to reduce a dependency on an external daylight analysis system – and to decrease the overall execution time – but this approach is almost certainly less precise. We’re also – hopefully for obvious reasons – not using the workstyle preference data provided by actual Autodesk Toronto employees to determine the placement of teams in the layout. Overall, though, I will say that this graph is pretty close to what was done in the original project.

Please download the graph and check it out: it’ll hopefully be a useful window into the work Autodesk Research (and, more specifically, The Living) does in this area. Be warned, though: the graph is very complex, and we know we need to add comments and/or documentation to help people make sense of it. Don’t be put off if you open it and don’t understand much of what is going on: we will work on bringing clarity to that, and in the meantime there are much simpler examples (such as the tiling graph, or the examples on the Refinery Beta site) that make much more sense when getting started.

We’ve clearly intended that this graph be used with Project Refinery, but do be gentle: the graph takes a lot of memory – especially with parallel execution enabled, which we’ve chosen to turn off for this initial release, even if the toggle is still there – and your mileage may vary, especially when running in memory-constrained environments such as inside a VM. Refinery is still in Beta – and this graph is Alpha – so don’t be surprised if you hit issues on larger optimisation runs. I’ll definitely post an update once we’ve ironed out the wrinkles on that front.