I’m very glad to be able to share the news that Project Refinery is now available as a public Beta. This is the optioneering and optimization engine for Dynamo that Autodesk Research has been using to implement the “generative urban design” workflow for Van Wijnen. It allows you to generate 1000s of solutions to a particular design problem, whether you want to explore random solutions, work your way through the parameter space systematically, or use evolutionary computing to hone in on optimal solutions. In the Manufacturing space we had Project Dreamcatcher – now the generative design capabilities built into Fusion 360 – while in the AEC space there’s Project Refinery.

The inspiration for Project Refinery has come from two places, in particular: firstly, it builds on the optimization engine and design exploration tools created by The Living (my colleagues in New York who joined Autodesk Research back in 2014) – and used successfully on the MaRS office redesign and the AU2017 Exhibit Hall – turning them into a toolset that anyone with Dynamo can use. Secondly, it integrates the learnings from Project Fractal to enable optioneering: the systematic approach of generating design options by stepping through combinations of parameterised inputs.

The Van Wijnen project was one of the earliest users of Project Refinery, and everyone learned a lot during the process. I’m really excited that this cool technology is being made available more widely in time for AU, especially as it’s the focus of three of my sessions, this week. :-)

Here’s a quick view of some results generated by Refinery for the Van Wijnen project: 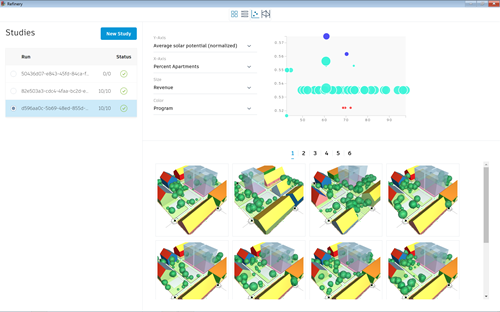 Technically, Refinery is a view extension for Dynamo for Revit or Dynamo Sandbox, and uses a headless version of Dynamo potentially to generate 1000s of design solutions. For now it works locally – mainly due to the need to run Python, zero-touch and custom nodes in complex Dynamo graphs – but the plan is that the Refinery engine will eventually be running in the cloud. Refinery generates results using one of several methods, such as by randomizing the inputs, by performing a “cross product” on them, or by optimizing them using a genetic algorithm (specifically the NSGA-II multi-objective optimization algorithm).

Once generated, the design explorer UI allows you to view the resulting solutions on a scatter-plot graph comparing different input or output parameters, allowing you to make sense of any interplay – or trade-offs – between the parameters and to discover interesting outliers. I also really like the parallel coordinates view that allows you to quickly see the input and output parameters for a particular solution. 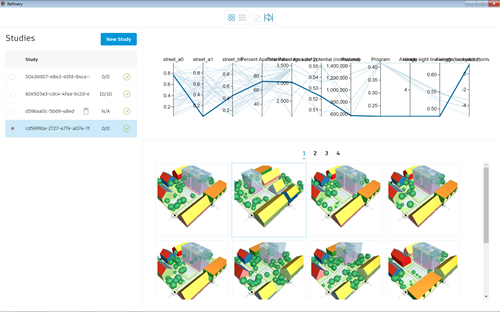 I’ll definitely be talking more here about the combination of Dynamo with Project Refinery, over time, but if you’re at AU this week and are interested in learning more, here are the relevant classes on the schedule (that I’m aware of):

SD229074 - Getting Started with Generative Design for AEC

This will be an introduction to Project Refinery and the projects that inspired it. We’ll take a look at a basic Dynamo graph that generates a tiling layout for a floorplan exported from AutoCAD, and how this can be used with Project Refinery.

This session is about the “Generative Urban Design” tool being used by Van Wijnen. In addition to the project’s background, we’ll be talking about how Project Refinery was used to create the tool as well as some tips & tricks on how to create Dynamo graphs that work well with Refinery.

This session will look into more advanced uses of Dynamo & Refinery for generating and evaluating designs for complex structures. Dieter will take you through three different examples – looking at areas such as spatial truss deformation – to give a sense for how these tools can be used to solve significant, real-world problems.

This is another super-cool use-case for Refinery as part of a fabrication workflow that includes Autodesk Inventor. You’ll see how Dynamo and Refinery can be used to optimise the design of rollercoasters!

Congratulations to the Refinery team on this important milestone! I know they’re keen to get feedback on the tool they’ve created, so please install it, give it a try and let us know what you think.