Wrap-up after TechX 2019 in New Orleans

I only managed to write a single blog post last week, as I spent the week at TechX 2019 attending interesting classes and networking with my Autodesk colleagues. It was an amazing week, so I do feel it’s worth sharing a bit more of its goings-ons. I only really talked about the first day of TechX in my last post, so let’s now see what the rest of the week had in store.

Much like the first day, the second day at TechX started with a number of keynotes. The first two were by Autodesk executives, our CHRO (Chief Human Resources Officer) Carmel Galvin, and our head of Design Creation Products, Amy Bunszel. 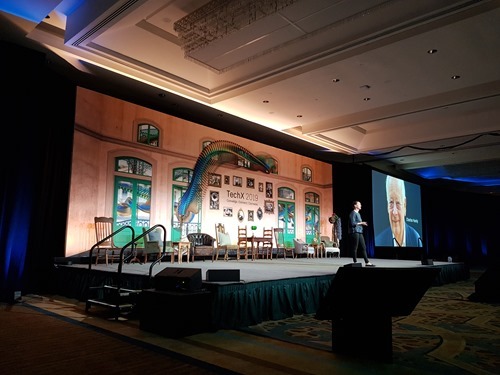 It turns out Amy is a Peloton super-fan. I only knew Peloton from Clue Heywood’s fantastic Twitter thread, so it was actually really interesting for me to learn how the company has built such a compelling subscription offering. 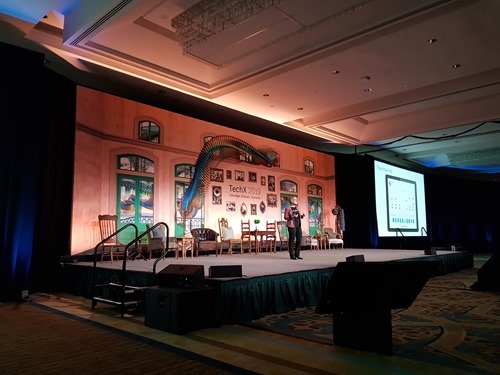 The third session was by Sharif Ben Chamach, Managing Director of HFB. It was an incredible session; Sharif did a great job of engaging with the audience, who hung on his every word. Even when he gave us a much-needed dose of reality. 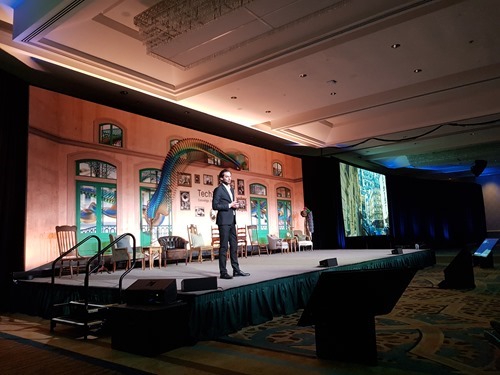 I’d been tangentially involved in discussions with (and about) HFB prior to TechX, so I was super-happy Sharif did such a great job. Here’s a mural depicting the content of Sharif’s talk (although looking at it now, I guess you had to be there :-). 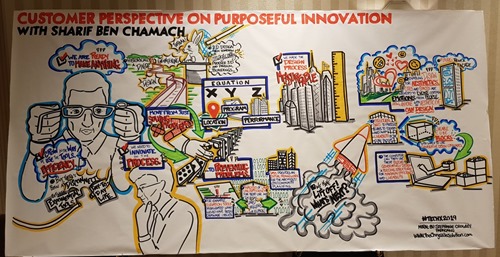 I had the pleasure of chaperoning Sharif for the rest of the morning: we went to a couple of sessions by colleagues in Autodesk Research, as they seemed the most aligned with Sharif’s interests. The first was by my Toronto-based colleagues, Hali Larsen and Fraser Anderson, and discussed a modular research framework for construction projects called ICE (Intelligent Construction Experience). 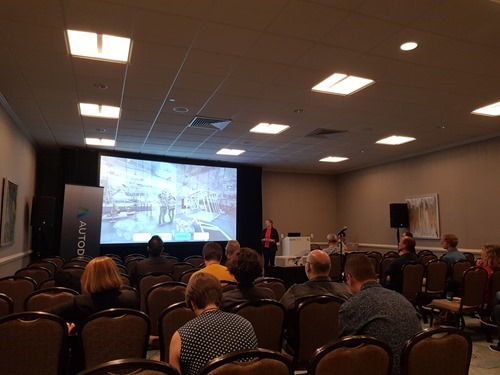 After this was a mini-workshop exploring cognitive biases run by Mickey McManus. 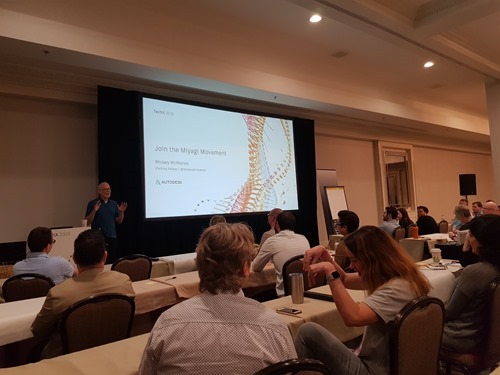 Mickey is spearheading something he’s calling the Miyagi Movement (a Karate Kid reference), which is all about developing transferrable skills – in fact unconscious expertise – as you go through life. (You can see some of the fruits of this initiative via a recent tweet of Mickey’s.) 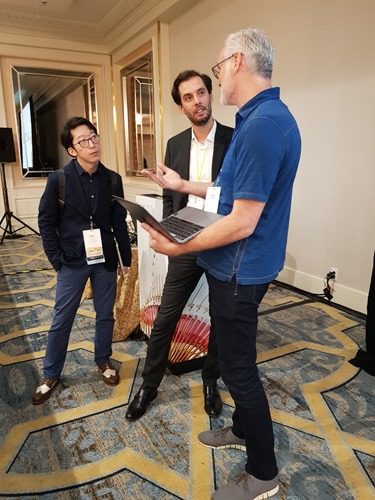 I’m really glad Sharif had the chance to meet with Mickey, who’s always such an inspiration.

After this was lunch, followed by a few more classes. In the evening Sharif and I met back up to head across to the Autodesk Research mixer, which was held on the 17th floor of a nearby hotel. 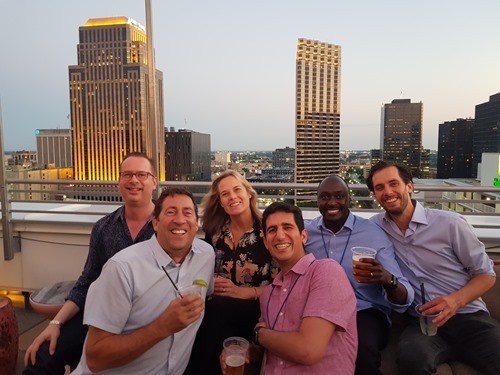 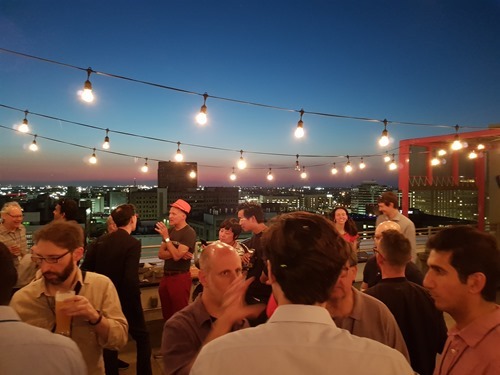 The third and final day of TechX proper also started with keynotes, this time by Lisa Campbell (our Chief Marketing Officer), Tracy Young (CEO of PlanGrid) and JoAnna Cook (Senior Director of Experience Design). I sat way at the back for these sessions, so my pictures don’t do them justice, unfortunately.

Right after these keynotes, Alex Tessier and I presented a session about the MX3D project. It’s always fun to talk about topics such as Forge, robots, 3D printed bridges and skeletons generated by real-time computer vision… this time in a single session! 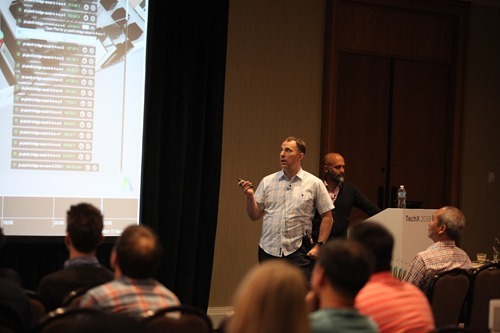 After this I hung out in the Exhibit Hall, primarily to catch the final round of the AWS DeepRacer competion. The top 10 racers from earlier in the week had a race-off to determine who would take home their own DeepRacer. (I had come in the top 25, so I at least went home with a DeepRacer hoodie.) 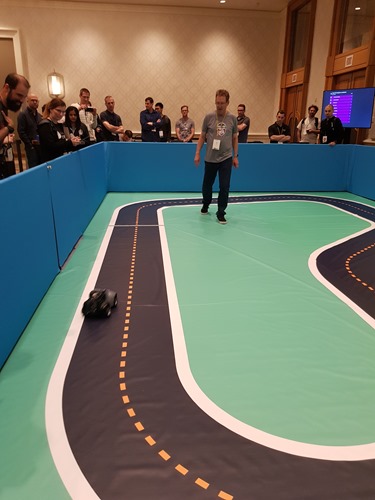 During the afternoon I attended some really interesting sessions by the Forge viewer team (LMV is alive and well!) as well as the Forge team’s senior data architect, Dov Amilhod. I’m excited about how the discussions at this year’s TechX have shifted… it really feels like the company is becoming a lot less siloed in its thinking (and – more importantly – operations), which is just fantastic.

The closing session of TechX was a keynote by our CTO, Scott Borduin, and our VP of Engineering Practice, Minette Norman, followed by the TechX prizegiving and awards ceremony. I’d been nominated in two awards categories, this year – for Autodesk Ambassador and Forge Platform Pioneer – and I’m very happy to say that I won the first. 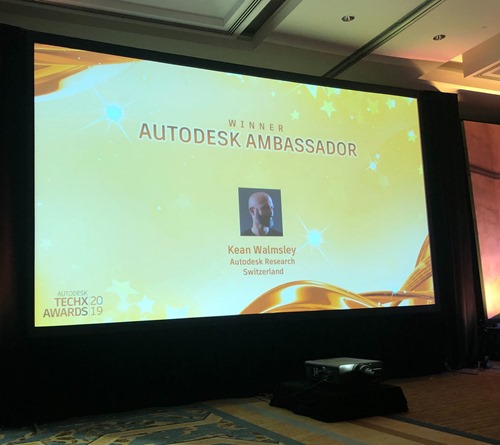 I’d been nominated alongside a number of highly esteemed colleagues of mine – including Shaan Hurley, Jeremy Tammik and Michael Sagan – so this was a real honour. 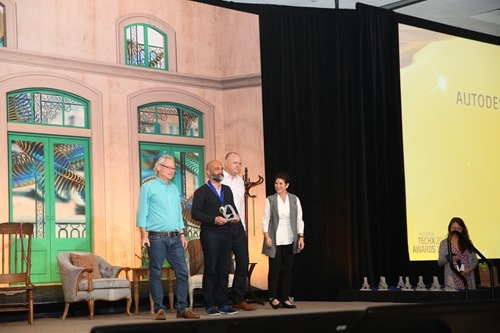 There were a number of other awards, of course, as well as a couple of special awards for Minette Norman – who has been running TechX for several years, but is handing it across to our CTO to manage, moving forwards – and for Ashok Gadangi, who works tirelessly to make TechX a success.

After this, it was off to the closing party at Mardi Gras World. 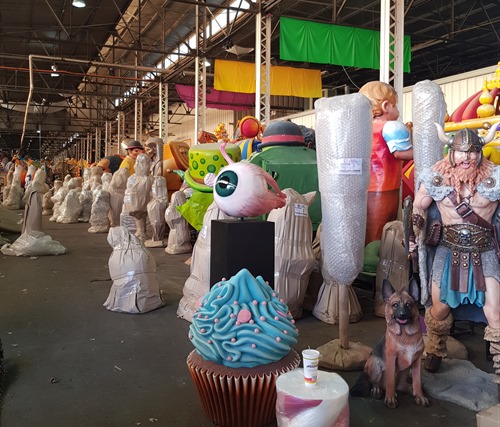 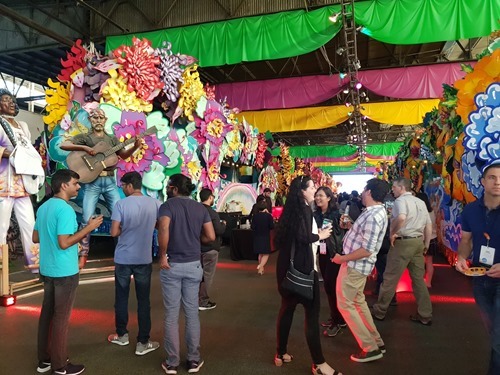 The food in New Orleans has been amazing, all week. Among other things at this particular party we ate oysters off the BBQ and boiled crawfish: 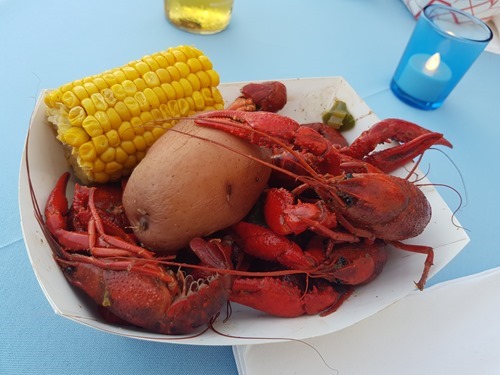 As the night fell the lights came on and the dancing started. 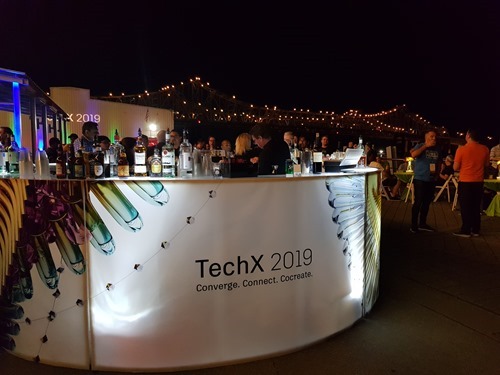 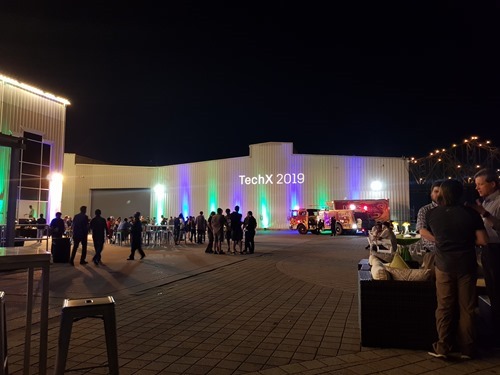 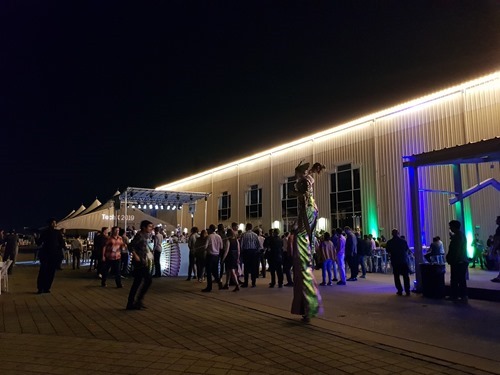 The next day I had to check out quickly before catching buses with 80 or so colleagues to visit the Whitney Plantation. (There were a number of post-conference summits going on, but I was very happy to sign up for the plantation tour, as my brain probably couldn’t have managed another half-day of technical information. Thankfully they were all recorded, so I can peruse them after the fact, in my own time.)

The tour started at a church that had been moved onto the plantation and housed the statues of the Children of Whitney. 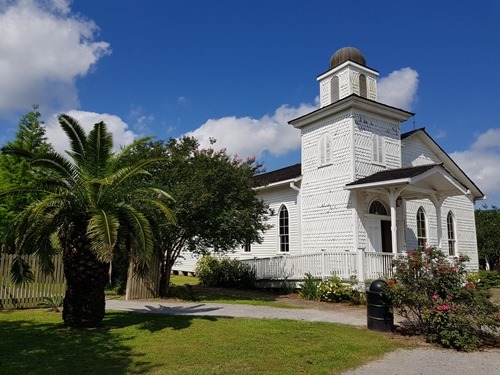 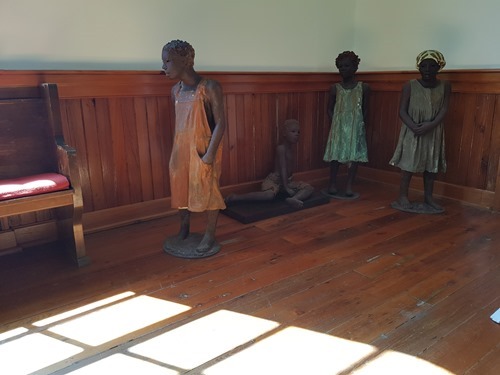 A lot of changes had been made to the layout of the plantation – to make it more accessible for tourists – such as adding trees for shade and moving some of the accommodation units nearer to the big house. This is one of the original units that would have been inhabited by slaves. 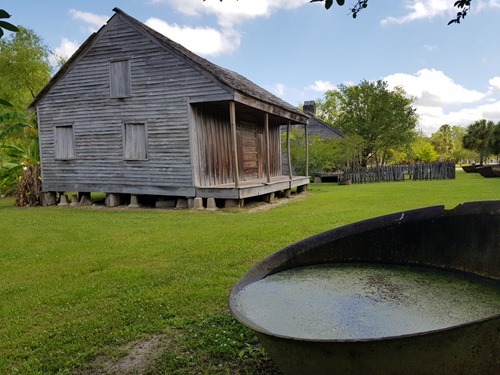 There were various memorials documenting the lives and stories of many of the slaves who lived and died at Whitney. It was beyond moving. 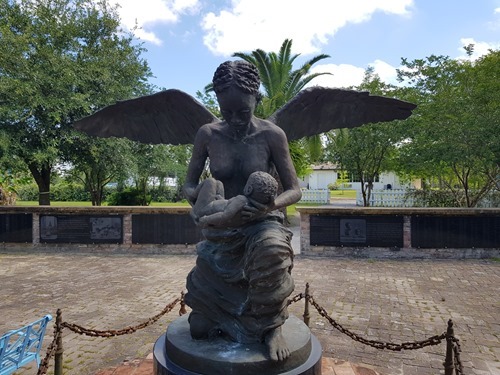 One of the slave uprisings on the German Coast had ended with the participants’ heads being put on spikes and displayed… a stark reminder of the brutality of life around the time of the American civil war. 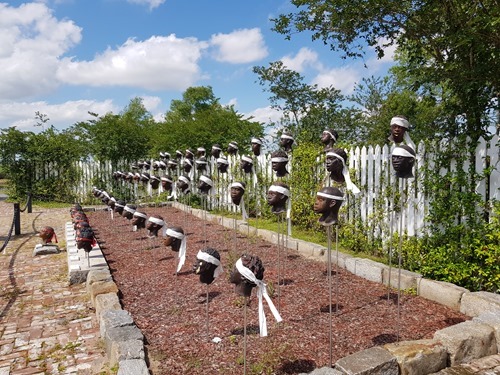 The plantation owners lived in luxury, of course. 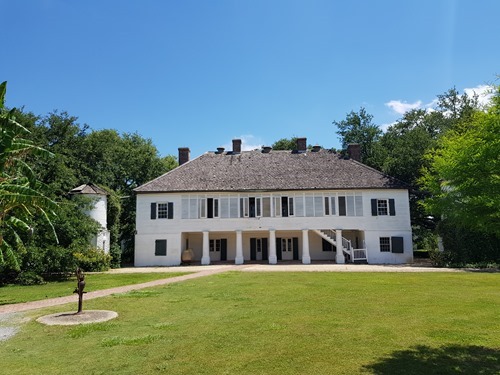 I found the front of the house – and its garden – particularly impressive. 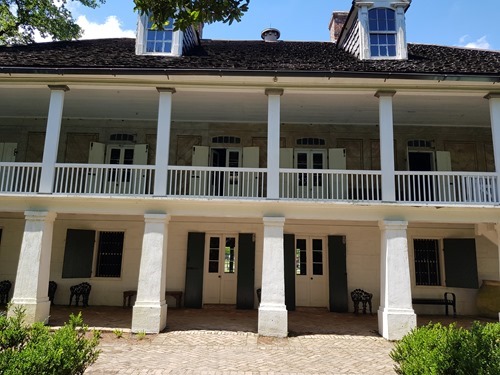 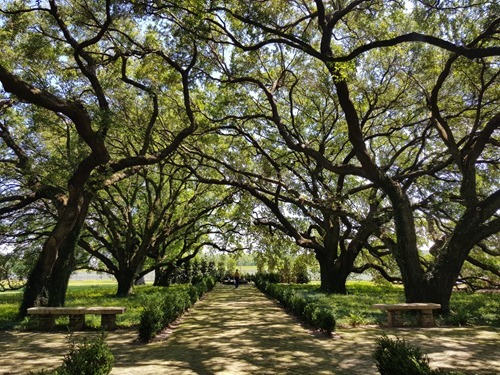 Everyone I spoke to agreed this was a profound experience: our group was split into three groups – each with a different guide – but everyone said they really appreciated the unique perspective their guide brought.

One of the plantation’s mottoes is “lest we forget”. This was a dark period in history – whether in the United States or elsewhere – and I was glad to be reminded of the lesson it gives us, as well as how these inequities continue to plague us in the present day.

After returning to the hotel, I went off to explore New Orleans with my old friend Elise Youmans. We wandered through the French Quarter… 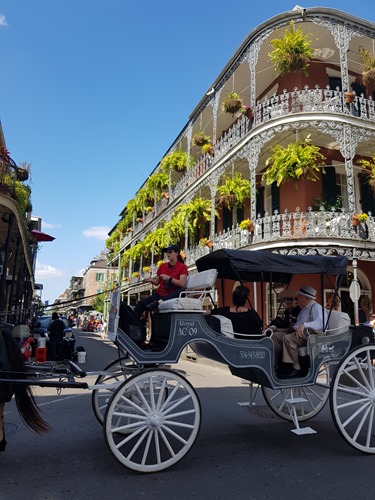 … and of course stopped for beignets at the Café du Monde. 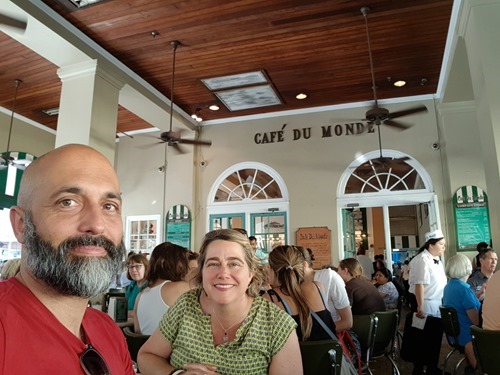 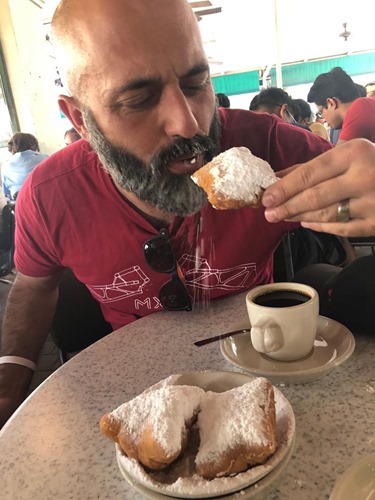 After this I headed to the airport, to take my 9:30pm flight to Heathrow and onwards to Geneva. I was shattered after a busy – but inspiring – week, and so slept well on the first leg, as well as when I got home. And I even managed to harness my jetlag to help me watch the Game of Thrones finale as it was broadcast (our local Swiss stations had a deal wherein the English-langage – but subtitled – episodes were broadcast at the same time as on HBO… 3am local-time).

It’s good to be able to use jetlag productively, for once!