I’ve been spending a lot of time talking about the work we’re doing with Dynamo and Refinery – especially as it relates to our plan to share a version of the “Project Rediscover” graph at AU London 2019.

But there’s more my team is hoping to be able to share in mid-June at Tobacco Dock: we’re working towards having a version of the NEST building – in particular the DFAB House, a showcase for digital fabrication in the building industry – inside Dasher 360. Ideally it’ll be displayed on a large touchscreen for people to interact with. [See below for the latest on this plan.] 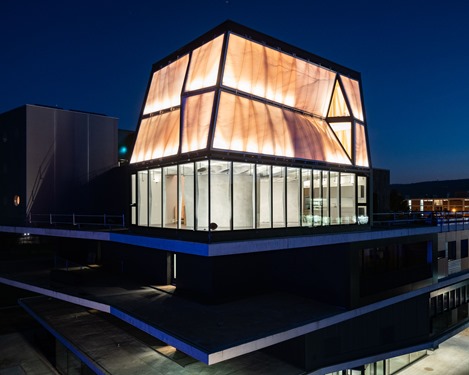 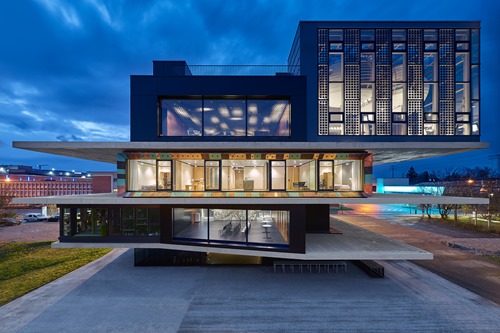 As a reminder, here’s a recent video that talks about NEST:

I’m heading across to Empa’s Dübendorf campus again tomorrow to help specify the sensors we need integrated into the source Revit model. NEST has upwards of 2,000 sensors already streaming data, so it’s really a matter of selecting a resonable subset that will help showcase Dasher 360’s visualization capabilities.

Many thanks to the good people at BIM Facility AG, who have been modelling the NEST building inside Revit and are heavily involved in the placement of sensors in the source BIM model, too. BIM Facility are playing a critical role in this project, and we’re lucky to have them involved.

This will be my fourth visit to NEST. Here are the blog posts from my first three visits, through which you can track some of the building’s evolution:

To give you a sense of where we are, today, here’s a quick view of the NEST building inside Dasher 360 – so far without any sensors placed. (Although we do have some sensors that were positioned for the sauna area – as you can see from my third visit – so we’re not starting completely from scratch.) 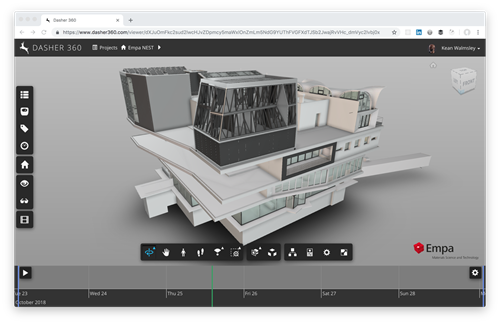 I do hope the stars align for this to be ready in time to be shown off at AU London: if so, it’ll be a really interesting exhibit!

It seems as though we won’t have a physical exhibit at AU London, after all, but we’re definitely working towards having the NEST model available via Dasher360.com during a similar timeframe for people to explore. Based on our meeting on Tuesday, in the near-term we’re planning to integrate building comfort data (temperature, humidity and CO2) as well as information on the state of the electrochromatic glass and window blinds available for the 1st floor and the DFAB House, in addition to end-to-end data on the energy being produced (via PV panels), stored (in battery systems) and consumed in the NEST building.