I spent the latter half of last week at ETH Zurich, attending a conference entitled “Robotic Fabrication in Architecture, Art and Design 2018”, or Rob|Arch 2018 for short. This is the biennial conference where luminaries in the AEC industry get together and plot how robots will replace millions of construction jobs over the years to come. Not really, of course: the big thrust of this conference is to work out how robotic fabrication technology might (or must) be applied to meet the housing needs of a planet whose population is expected to increase by nearly 30% over the coming 30 years. And I, for one, welcome our robot overlords. OK, I’ll stop: I do understand there’s sensitivity around this topic, even if I personally believe that there will be plenty of work for humans in the construction industry of the future.

It’s a nice time of year in Switzerland and it was fantastic to spend a few days in Zurich. There were pre-conference workshops held during the first part of the week (coinciding with the sister conference, Digital Concrete 2018), but I only went across from Wednesday onwards. 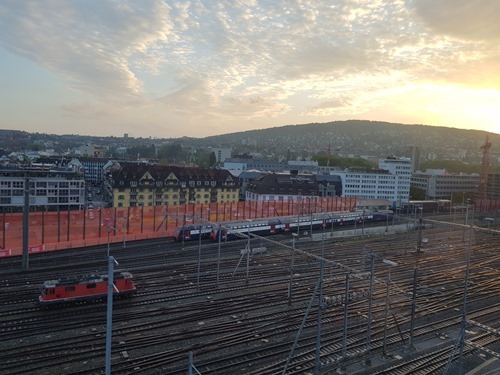 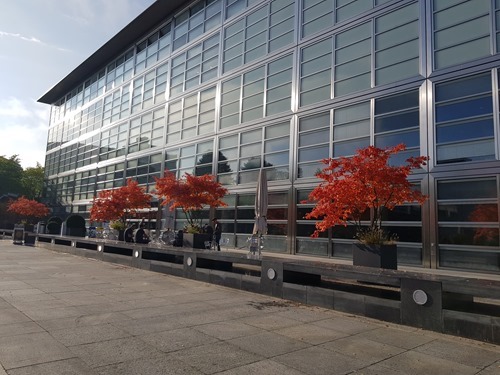 Rob|Arch is a seriously interesting conference. My background is in Computer Science – rather than in Architecture or Engineering – but so much of this conference is focused by necessity on inter-disciplinary collaboration that – even if I can only understand a modest subset of what’s being presented – it’s clear, even to me, that this is where the construction industry is going over the coming decades. It’s fascinating to see the future of an industry that’s so clearly in need of change being unveiled in front your eyes.

The conference has only been running for 6 years (it’s the 4th edition, after 2012, 2014 and 2016) but the depth and quality of the conference has steadily grown (by all accounts: this is the first one I’ve attended, myself). In earlier conferences the focus was more on using industrial robots in construction but, while this is still a strong area of research, increasingly the papers presented have gone beyond to show how different breeds of robots (including UAVs) can be used – sometimes collaboratively – in construction. 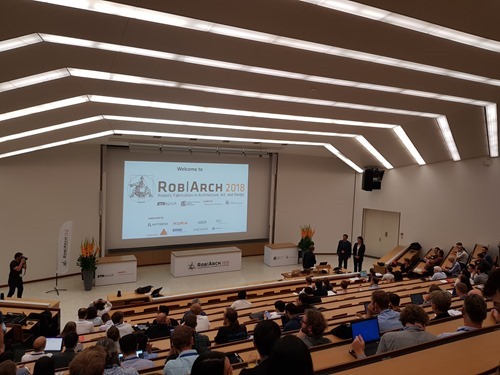 The event started with an evening keynote by Chris Luebkeman from Arup, setting the stage for the type of ongoing innovation needed by the industry. 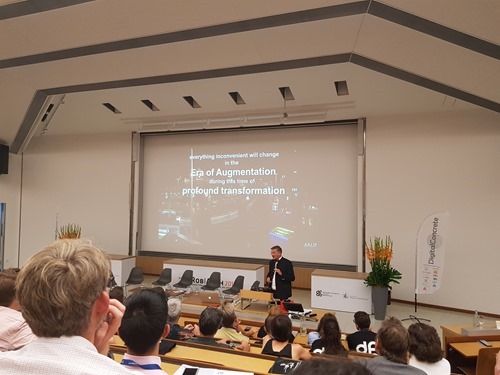 There were a number of other keynotes held over the next few days. The one that resonated most with me, personally, was by Jonas Buchli, an ETH professor who now works for DeepMind. Jonas took a clear, “nuts and bolts” approach to exploring the technologies that will be used in construction, from autonomous robots to human augmentation. 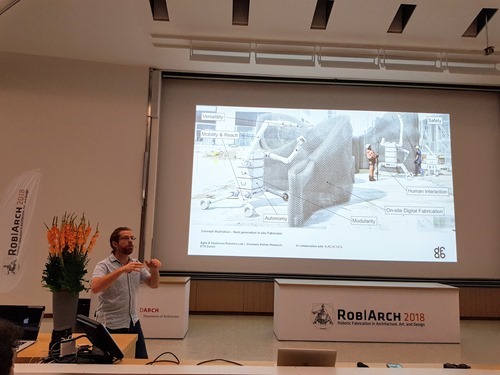 Conferences such as Rob|Arch wouldn’t be possible without industrial sponsorship, and the main sponsors delivered brief presentations during the course of the conference. Arup delivered an absolutely fascinating talk on the work they’re doing for the Sagrada Familia in Barcelona. Offsite prefabrication is being used to continue work on one of the most iconic basilica in the world: if ever there was a testament to the reach and value of the offsite prefabrication process, it’s that. 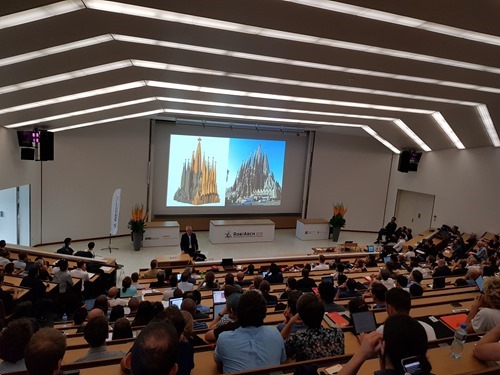 Autodesk also sponsors Rob|Arch, so Matt Jezyk talked a little about the company and the tools we create. 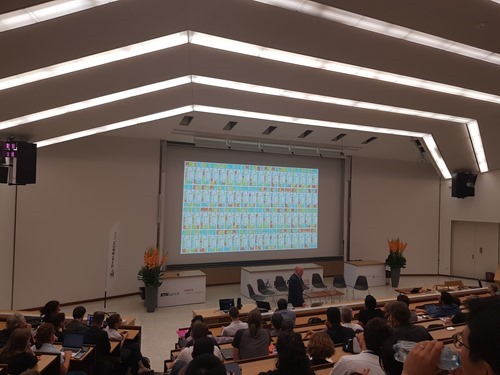 The paper presentations were split into various categories. On Thursday we saw Materials and Processes, Construction and Structure and Application and Practice, while on Friday we saw Design and Simulation and Control and Fabrication. There were lots of really interesting papers presented: far too many to list in detail.

Many were focused on the use of robots for 3D printing, naturally enough… 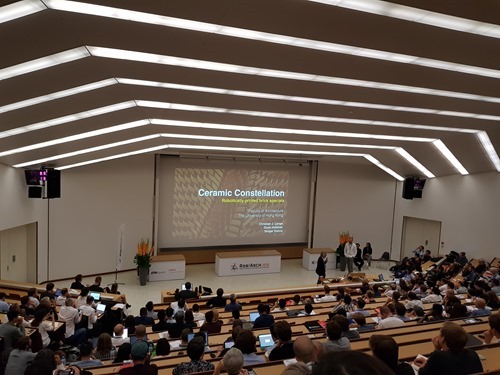 Some of the ones I liked best talked about using diverse types of robots for construction, whether drones that continually shift panels in an overhead canopy based on the needs of the people beneath it… 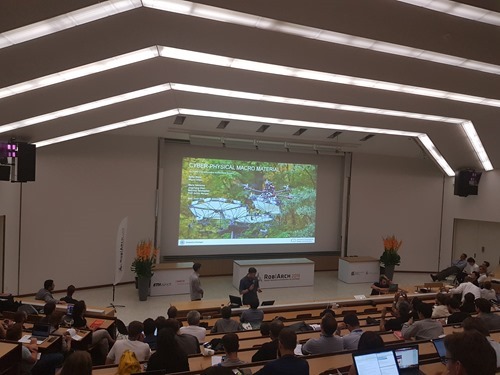 … or custom-built “fiberbots” that spin resin into tubes, curing them via integrated LED lights as they travel through. Too cool! 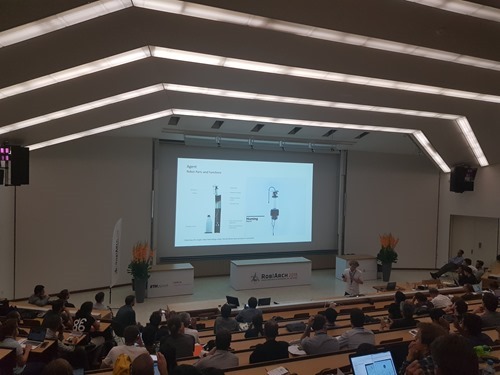 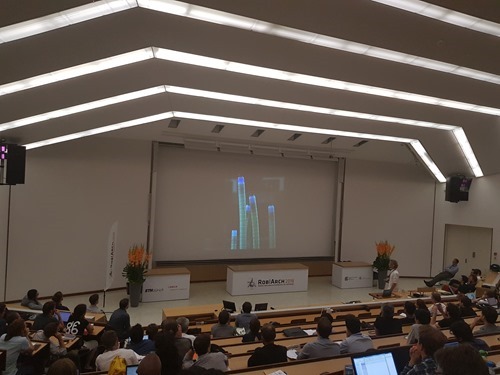 The DFAB HOUSE at NEST was mentioned a number of times during the course of the conference: it’s a core location for ETH’s various digital fabrication projects. 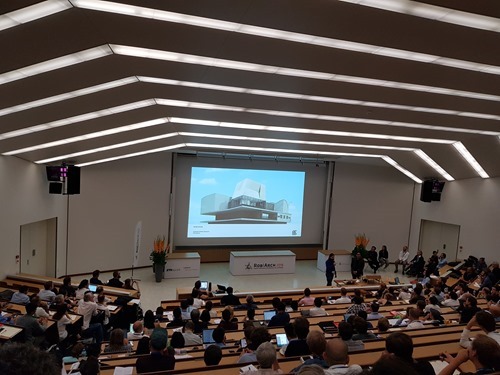 I admit I multitasked a little during some of the sessions, but it seemed appropriate somehow to be trying to integrate animation of robots into Dasher 360 during my time at Rob|Arch. :-) 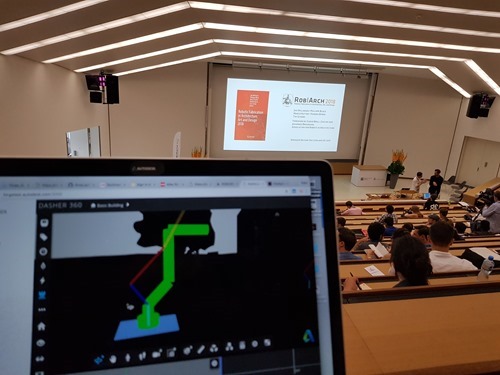 There were Q&A sessions held after each round of papers, as well as panel discussions on the challenges and opportunities in this space. 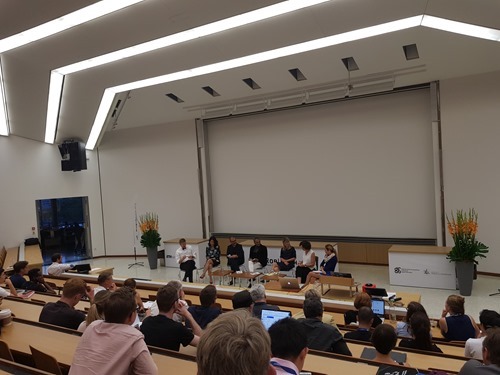 On the last day, awards were presented for the best projects (including Fiberbot) and workshops. Here’s a shot of one of the awards presented by Autodesk: 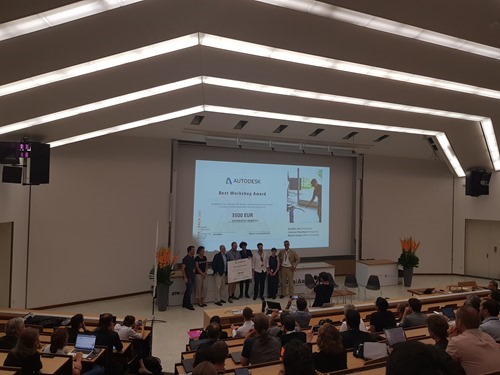 There were evening events during the conference, giving people the chance to network.

The first evening’s was held in the foyer of the Physics building – the location of the main conference presentations – while the second evening’s party was held across the road at the Robotic Fabrication Laboratory (RFL). A storm had come in during the course of the afternoon, so many people, including myself, got more than a little soggy as we walked between buildings. 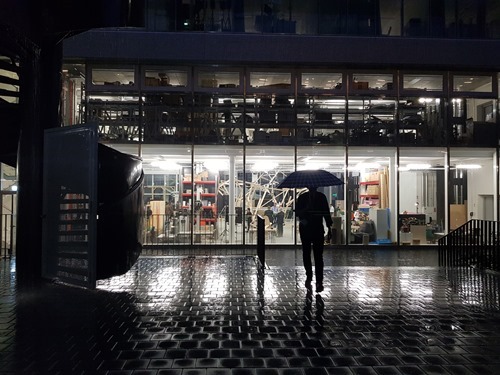 It was a great opportunity to see some of the workshop projects from earlier in the week, as well as some longer-term activites of the RFL. On the last night the party was held at NEST, which was perfect. I was really happy to see it during the evening – and at night – as well as seeing the progress that had been made on it since my last visit. 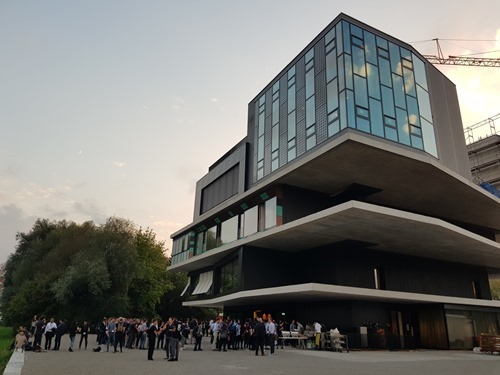 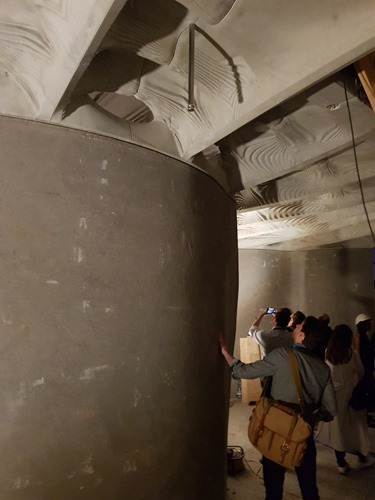 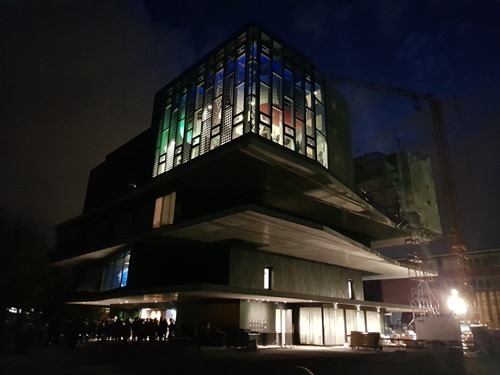 I really enjoyed meeting people at this year’s Rob|Arch. Here’s a shot with Autodesk colleagues from Birmingham (Pete Storey) and San Francisco (Nick Cote), as well as one with the broader Autodesk team that attended the conference (it includes a few additional people we asked to join the shot). 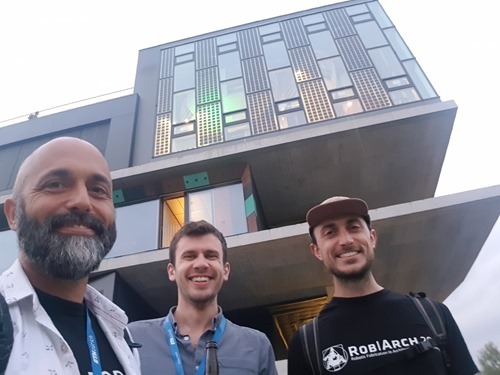 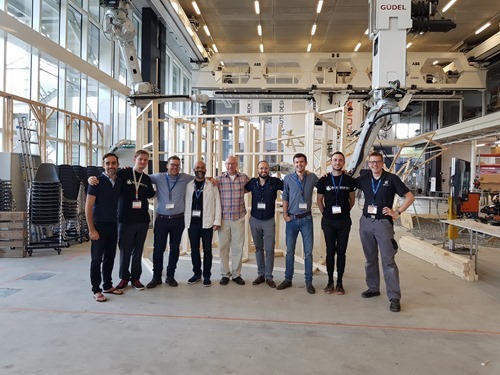 Here’s a closing photo that was taken during the party in the RFL. I’m in there somewhere, although you’ll probably struggle to find me (we were asked to jump in the air for the shot, so the lanyard of my conference badge is in front of my face :-). 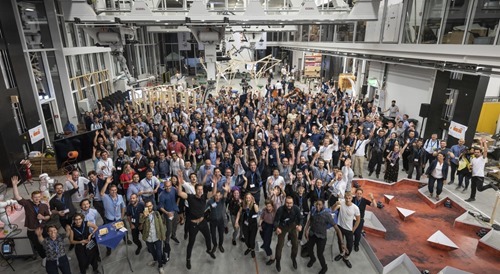 Image copyright of Robots in Architecture

I was really glad I had the opportunity to attend this edition of Rob|Arch. The next one – Rob|Arch 2020 – is being held in Beijing. I somehow doubt I’ll manage to get across for that one – one of the main reasons I attended this edition was the fact it was so close to home – but then you never know: there’s so much going on in this space and I only see it as becoming increasingly relevant to the work that we do.