« Coming to a Forge DevCon in the US or Europe? It turns out Ill be talking at both! | Main | Digital robot twins »

It’s been a whirlwind few days. The trip up to Darmstadt on Monday went relatively smoothly: I had to take four trains to get there, and only missed one connection (the one in Frankfurt, but thankfully I could hop on another train and arrive just 10 minutes later than planned). Still, the nearly 6 hours of train passed reasonably smoothly. 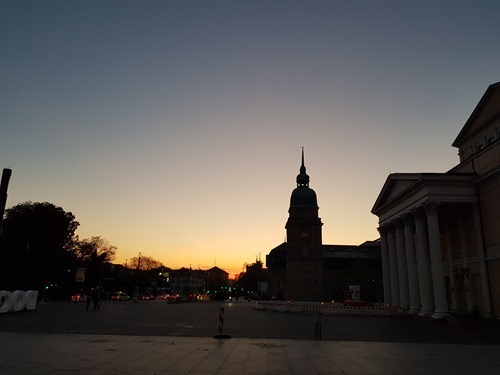 After arriving in Darmstadt I met with Sander Lijbers and Tony Thuy, who’d organised to host some customers from the Netherlands. We went for dinner at a nice restaurant serving local food. When in Germany, eat schnitzel! 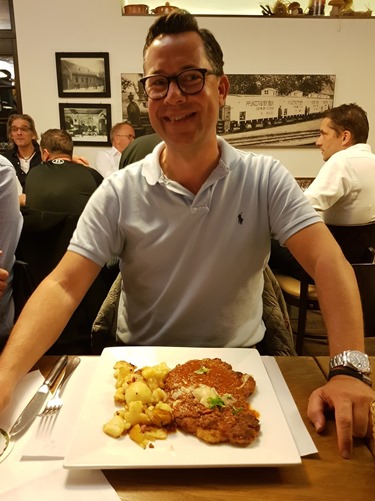 It was a fun crowd, and with the projects I’m working on with Van Wijnen and MX3D I’m really starting to feel like an honorary Dutchman. 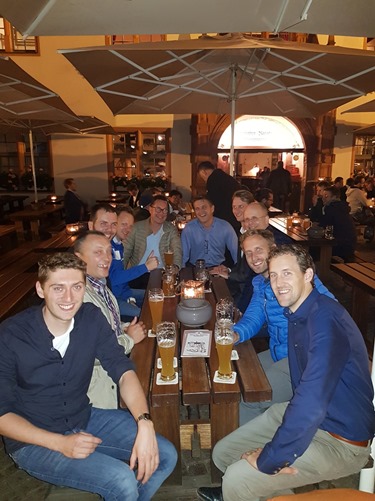 The following morning I arrived in good time at the Centralstation venue (which is along way from the Hauptbahnhof, somewhat confusingly), and caught up with various people. 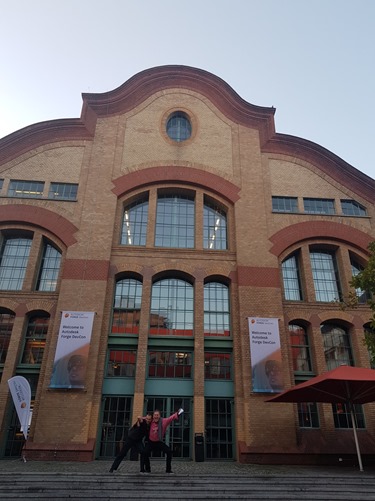 Michael Beale had his Magic Leap One on hand for me to try… honestly I was expecting more. I’d heard it was a bit like a HoloLens v1.5, but based on the really short time I spent playing with it, it really only felt like a v1.1. Oh well. 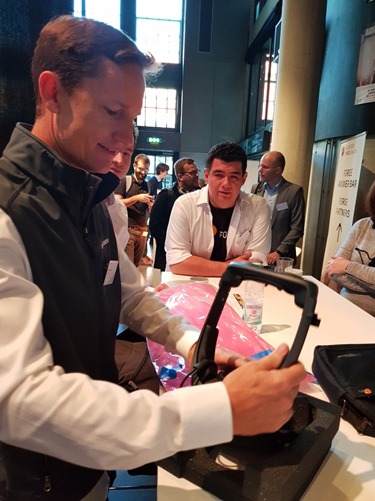 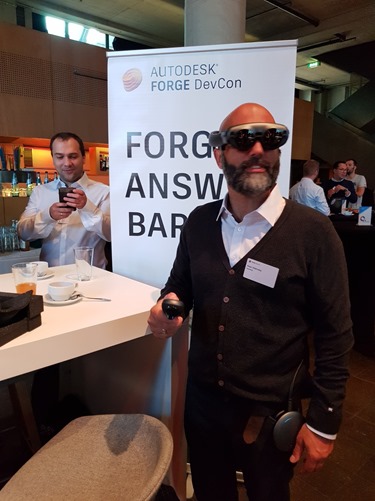 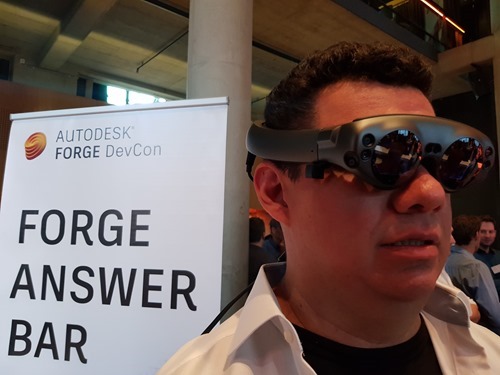 For the morning session, Jim Quanci kicked off proceedings, as usual… 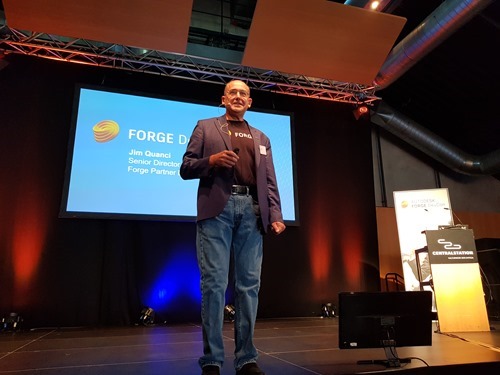 Nicolas Mangon’s keynote talked about the problems facing – and opportunities for – the construction industry over the coming years, and made particular mention of both the Van Wijnen and Dasher 360 projects, which was fantastic. 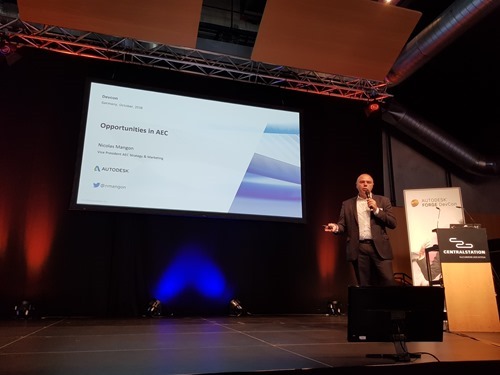 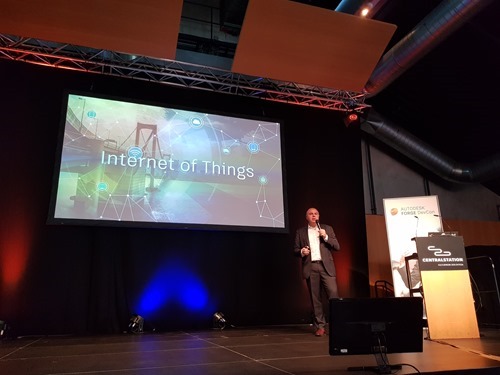 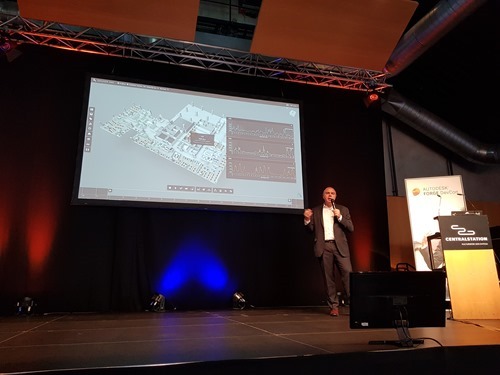 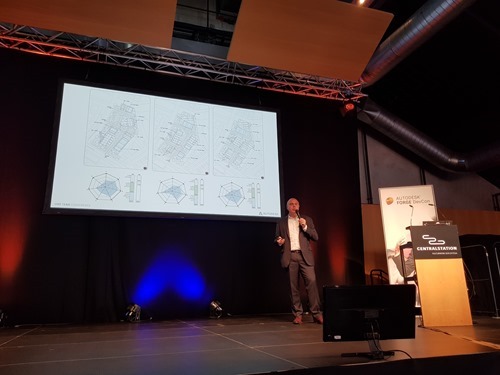 There were customer presentations by Royal BAM group and Cadac, VINCI and Cap Gemini… 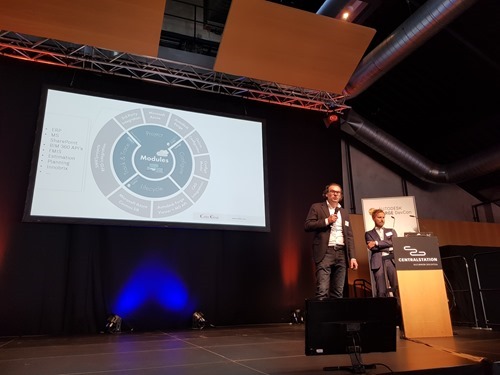 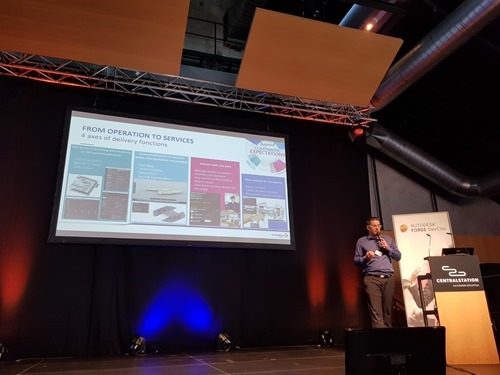 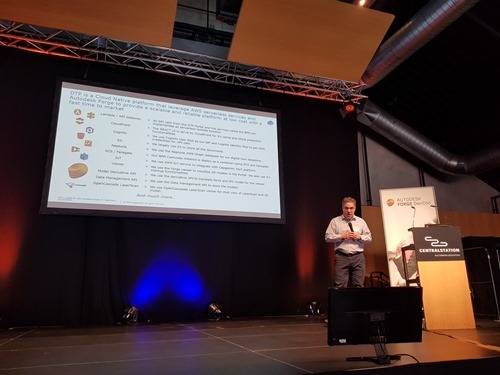 … and then after a quick coffee break we heard about the coming wave of platform technology from various members of the Forge team. 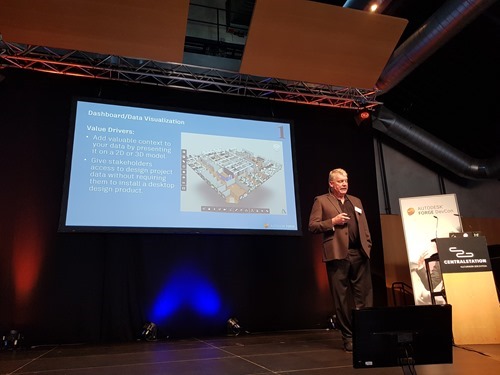 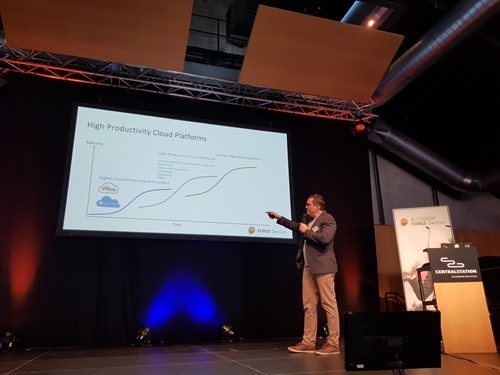 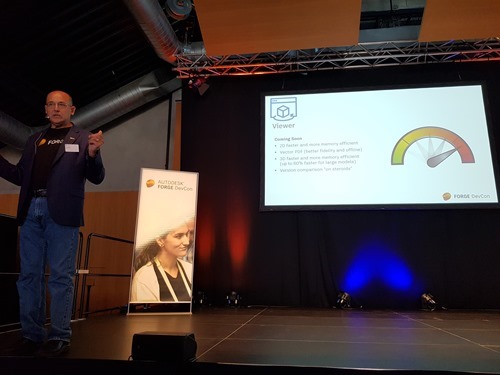 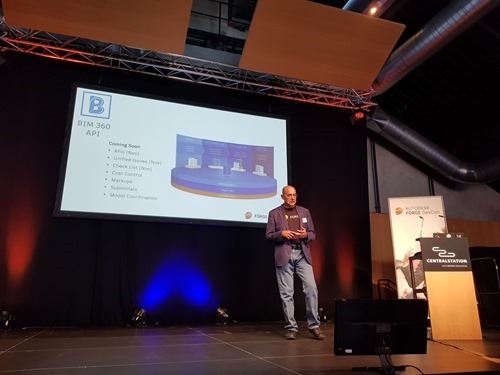 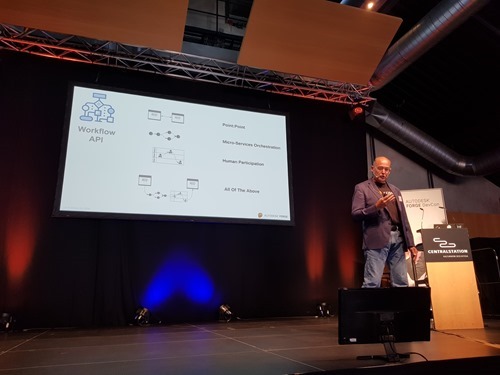 During the afternoon there were breakouts. I attended a great session by Michael Beale and Petr Broz. Michael and Petr are former members of the team who develop the Forge viewer and have incredibly deep skills. They had put together a really cool technique for storing Forge viewer models for access when disconnected. This is going to be a really useful feature for the MX3D project, in particular, where we’re going to function despite limited connectivity at Dutch Design Week. Let’s see if I can integrate it into Dasher 360 in time! The breakouts all seemed to be well attended, with solid content. 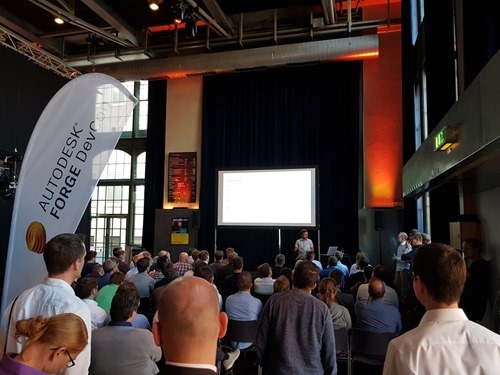 My own session seemed to go well… (thanks to Sander Lijbers for sharing these snaps and saying such kind words on Twitter about the session.) Thanks to everyone who attended and engaged so well on the topic. I’m looking forward to giving the same session in Las Vegas. 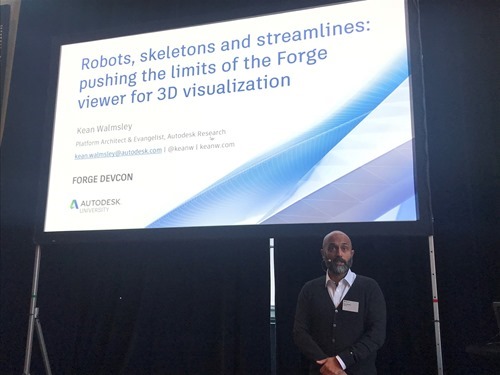 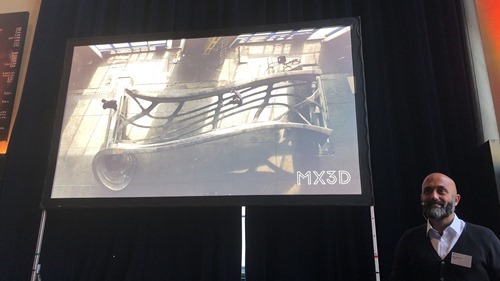 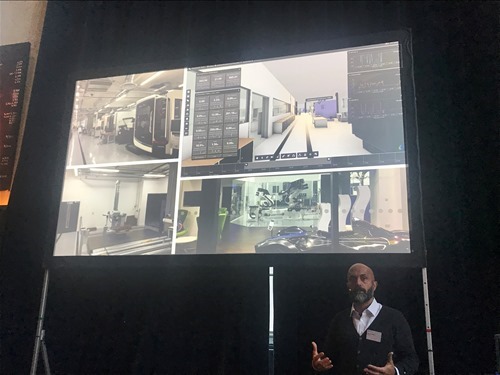 In the evening we had a number of 10-minute sessions from partners who talked about the things they’re doing with Forge. I was really happy to see Moicon’s session, where they showed streamlines integrated into their app to show the results of a path-finding algorithm. Super-cool! 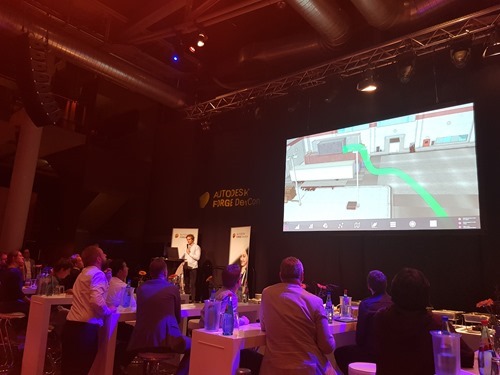 Later on a few of us stopped by a Mexican restaurant for a margarita or two. It was really nice to catch up with Jim, who showed me his new tattoo. A bit of a surprise, to say the least! (The tattoo is the logo he designed for his boat – the Green Buffalo – in case you don’t recognise it.) 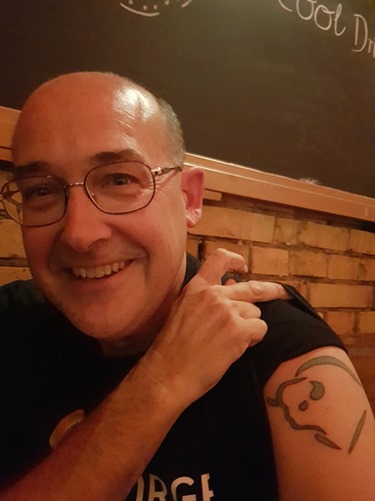 After dealing with a few quick emails I got to sleep sometime after midnight. The plan for today was really fun: I’d planned to take a Flixbus to Europa Park – a theme park about somewhere between Frankfurt and our home in Switzerland – where my family would come and meet me for the day. The bus was due to leave at 7:30am from Darmstadt: I was so nervous about missing it that I got up at 5:45am, only to find an SMS on my phone saying the bus had been cancelled. Argh.

I checked the railway timetable and realised I could get there by train with plenty of time to spare, but the best option was a train leaving Darmstadt at 6:13am. I jumped out of bed, had a quick shower, packed my bags in less than a minute and got on a tram to the station. I managed to get a ticket and get on the right train just in time. Sadly it all went downhill from there…

My first change was at Bensheim. The train from there was cancelled, so I got the next one. It arrived in Mannheim at 7:36am, just as the onward connection to Offenburg was leaving. I missed that, of course, but I had plenty of buffer in my schedule. I decided to grab some breakfast and catch the 8:36am instead. It turns out that buses were not the only things suffering in Germany today: the 8:36 was so delayed it came *after* the 9:36. So I ended up waiting 2 hours in Mannheim. I eventually got to Europa Park 5 hours after leaving Darmstadt… my family had been delayed in traffic jams around Basel, so we ended up arriving pretty much at the same time. So despite everything it worked out, with little thanks due to either Flixbus ot Deutsche Bahn. (Someone was telling me, yesterday – probably Jeremy Tammik? – that the train system in Germany has recently been privatised and now runs with only 33% of trains on-schedule. I can very easily believe that statistic, sadly.)

Anyway, Europa Park was absolutely splendid… at this time of year they fill the park with thousands (even tens of thousands) of pumpkins. We love it! 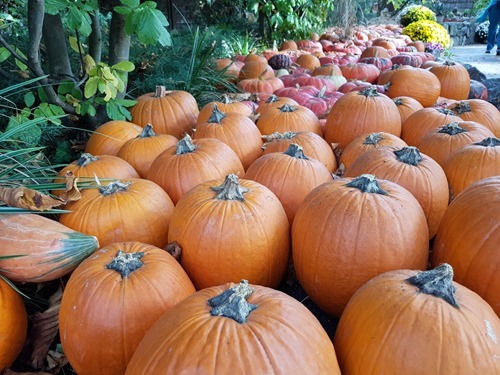 I drove us the 2.5 hours back home, and finished writing this post. Tomorrow I need to look into travel to head back to the Netherlands to help with the last push to get the MX3D bridge ready for Dutch Design Week in Eindhoven. I’d been hoping to have a full week’s break from travel, but that’s life!