Adding smarts to the MX3D bridge

I’ve spent most of this week in Amsterdam with colleagues from the Toronto office. Our group descended on the MX3D offices in the funky NDSM wharf area of the city, to make a big push and help get the world’s first robotically 3D-printed steel bridge – and its supporting systems – ready for Dutch Design Week.

Most of the team stayed in a hotel right next to MX3D, but we did get the chance to take the ferry across to “the mainland” (it isn’t really: everything is connected, it just seems that way) from time to time. 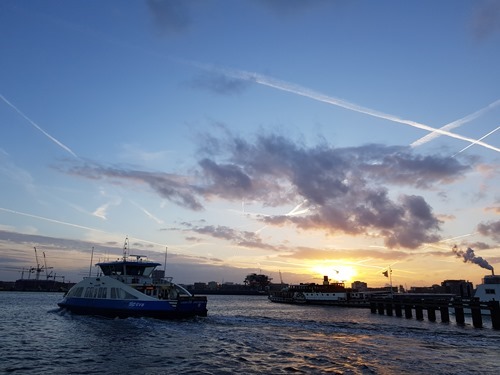 It was really nice to see the progress since my last visit. The bridge has decking welded in place, which certainly makes walking over it much safer. 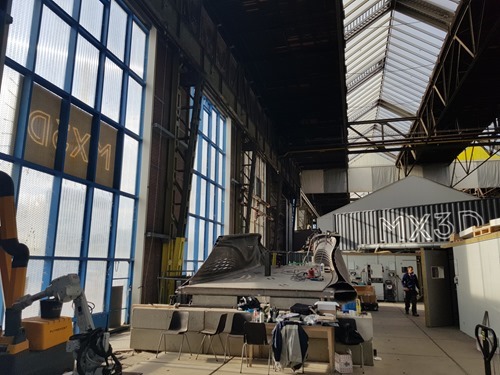 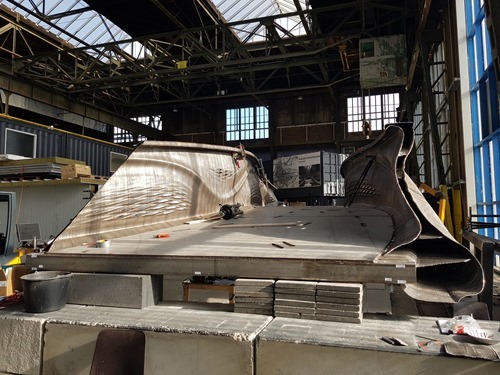 One of the days I was there the sky was clear, which meant we had really nice morning and evening light hitting the bridge. 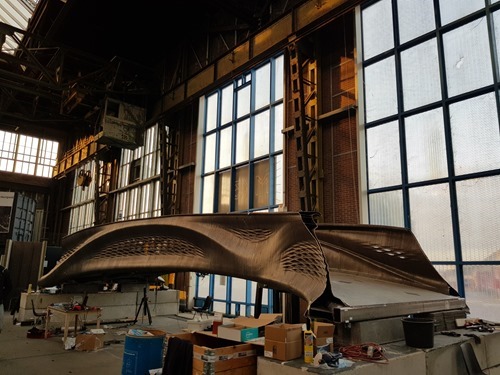 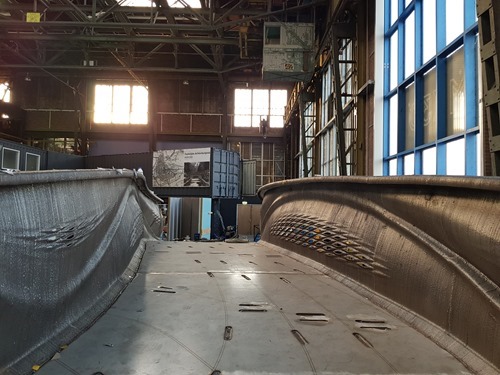 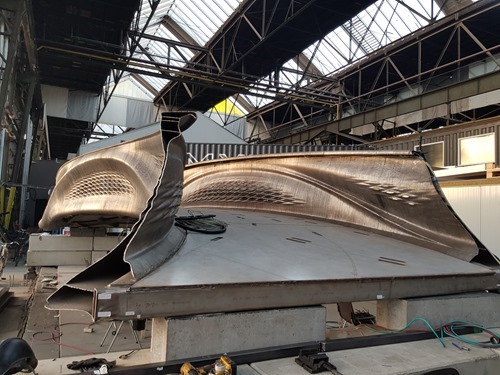 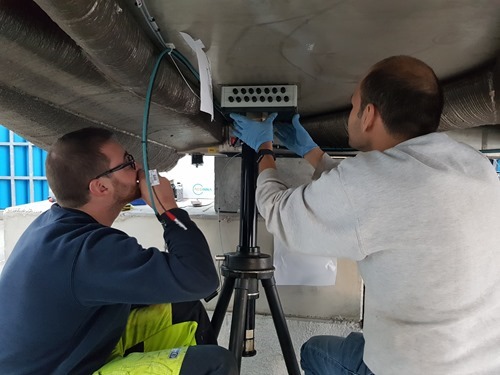 Our job as Autodesk Research is to take the bridge’s sensor network and help turn it into a real nervous system, collecting data on how people use and interact with it. Eventually we’ll have 50 or so sensors throughout the bridge, collecting strain, acceleration, inclination, load and even temperature data. This data will flow through a number of HBM Somat data acquisition boxes into our back-end time-series database for visualization in Dasher 360 via Forge. 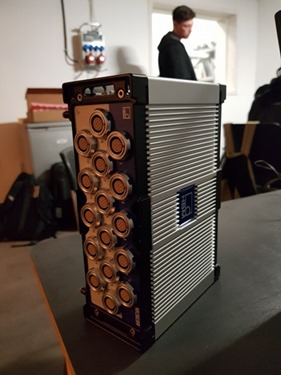 I was mainly working with Hali Larsen on getting Dasher connected. Here’s Hali measuring the location of the various sensors for placement in the 3D model that would be brought into Dasher 360. 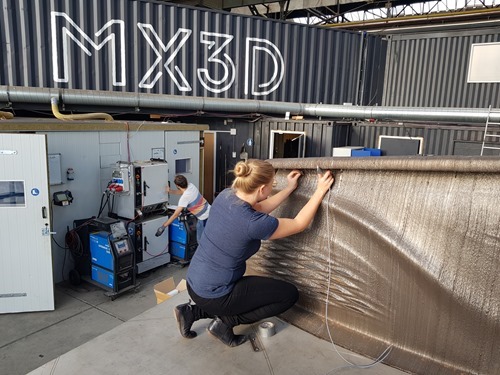 Josh Cameron is part of the team focused on getting data from the sensor network into our time-series database. Here he is just after we started to see data coming off our first sensor (Hali and I were the first people detected walking across the bridge, mainly because we were trying to measure sensor positions). 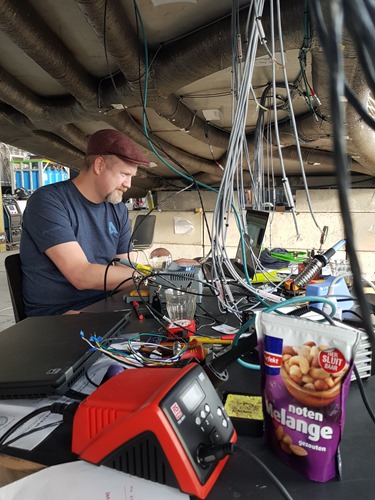 Jelmer Frank Wijnia popped down from Van Wijnen’s offices in the north of the Netherlands, so we could spend some time talking about our AU 2018 class. He also enjoyed taking a look at the bridge and kindly took a few photos and videos. 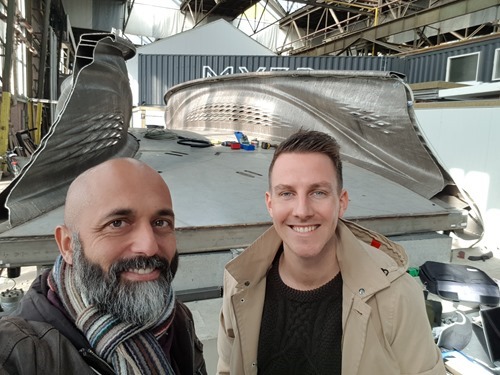 More formal structural tests have been performed on the bridge, of course – it’s so far had 10 tons of weight placed on it – but there’s nothing like getting a bunch of people to jump in sync, to see how it performs. It’s likely to be the first thing people try to do anyway, once they realise their crossing is being measured and displayed. 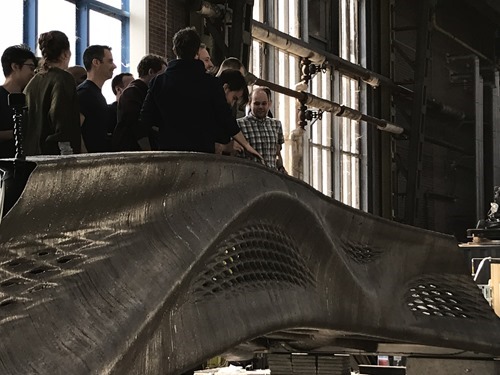 Getting a large group of people to jump repeatedly in the same rhythm isn’t easy. We tried a couple of tracks to help us synchronise (by House of Pain and Van Halen, predictably enough), but it took a little work to get to the point where we really got the bridge to displace. With no unexpected results, thankfully.

It was great spending time with my Autodesk colleagues working on the bridge project, this week: Alex, Hali, Josh, Mike, Jacky, Liviu, Pan, Merry and Alec, as well as with Arne, Craig and Jelmer Frank. I’ve had to leave early to participate in a generative design event in Barcelona, but I’ll be back working on getting more into Dasher next week. So far we have a few sensors placed in the “digital twin”, with a working connection to the (currently empty) database. 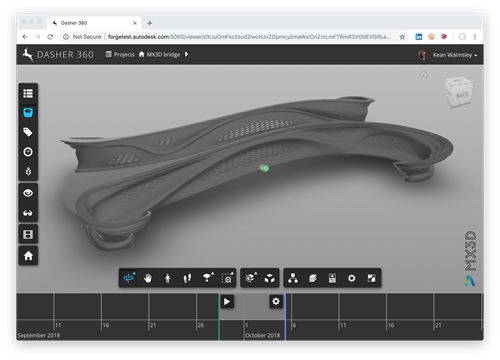 I’m really excited about the potential for reporting meaningful data on the usage of smart infrastructure. Once we have callibrated cameras in place we’ll even be able to see skeletons of the people walking across the bridge in 3D, and be able to correlate that with other data measure by the bridge. This is going to be amazing!