Firstly, I’d like to thank the few people who engaged on the last One Man’s Trash, which was clearly (but hopefully not too clearly) an April 1st prank. I’d have expected more people to “bite”, but then it was posted over the weekend, so perhaps not that many people saw it. Or perhaps it was obviously just for fun, in which case I hope people appreciated it at some level.

Anyway, today’s giveaway is fo realz, yo. An old friend and colleague in our Localization department, Paul-Henri Arnaud, dug out a number of digitizing tablet overlays dating back to the turn of the millenium. The first two are for AutoCAD R14 and are in English and French (circa 1997) while the second two are for AutoCAD 2000 in French and German (circa 1999). 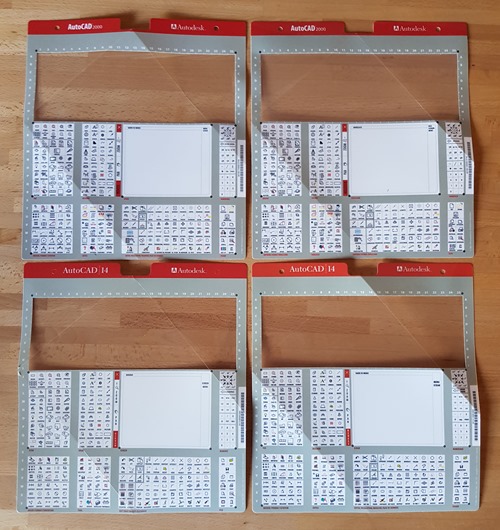 These will be a very nice addition to any CAD enthusiast’s collection. Here’s a close-up of some of the R14 French commands: 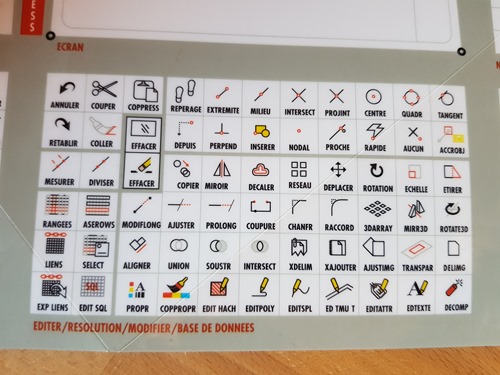 In case some of you weren’t in the CAD industry when digitizing tablets were a thing… back when I started these were the prevalent peripherals in any drawing office. You’d typically have a Compaq Deskpro 386 (with a 387 maths co-processor) running AutoCAD for DOS in a darkened room dominated by a mammoth CRT screen. And the digitizing tablet would – of course – have the overlay for the version of AutoCAD being used, with its various command shortcuts. 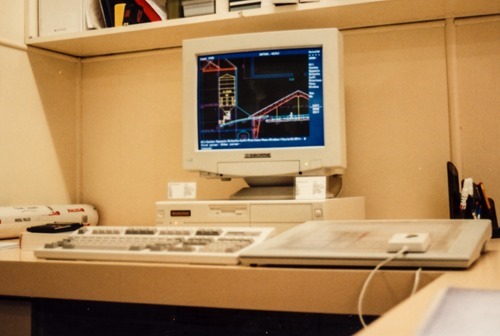 These were the days before toolbars and ribbons: you used the screen menu or the tablet overlay, assuming you weren’t a command-line junkie like most of the real pros. In fact, one of the biggest impacts I remember having in the drawing office I tended CAD for was the reduction of most commonly-used commands to one or two characters. It didn’t matter whether you used LISP or the PGP file – the draftsmen lapped that stuff up way more than the 2D parametric tools I helped develop. Sigh.

Anyway, if you’re interested in one or more of these (I’m happy to send all as a single lot, but feel free to say if you’re not interested in all of them) then drop me an email and I’ll update the post. I will share your name and would also (ideally but optionally) share a photo of you with your new treasure.

These have all now gone to their new homes (or will soon be on their way, anyway). The French R14 and 2000 overlays are on their way to Texas – along with a couple of digitizer pucks that have been thrown in for good measure – where our friend R.K. McSwain will display them to show a little CAD history to his colleagues. The remaining overlays – and two more pucks – are heading the other way around, to the Ukraine, where my friend Dmytro Yemelyanov will use them for something similar. I’m very happy these will all be put to good use!