We continued our path northwards from Rockhampton, and did a big chunk of the drive to Mackay. We stopped for lunch at a rest area in Marlborough, which ended up being a great place to take a break. 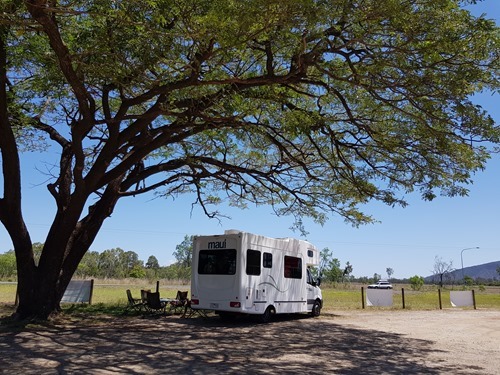 About 40km south of Mackay we found a place to stay via CamperMate in a place called Ilbilbie. It looked fairly non-descript from the road… 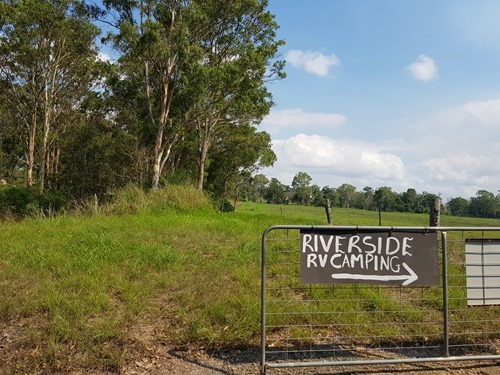 … but we soon realised we’d struck campervan gold: the farmer lets people park in a big, flat field down by the river on their property and charges A$10 for the privilege. No power, no toilets, no running water, no showers, but – and here’s what clinched it, for us – no neighbours! Of course you may have other people using the site, but we had the whole field to ourselves. 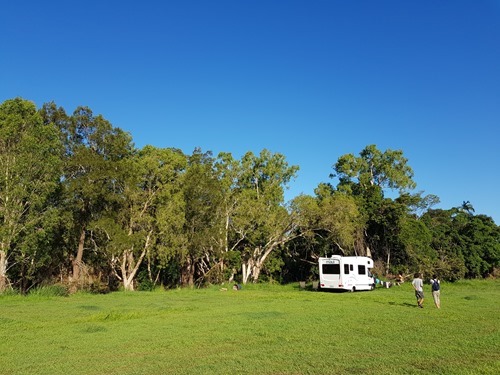 The nature around us was simply breathtaking. 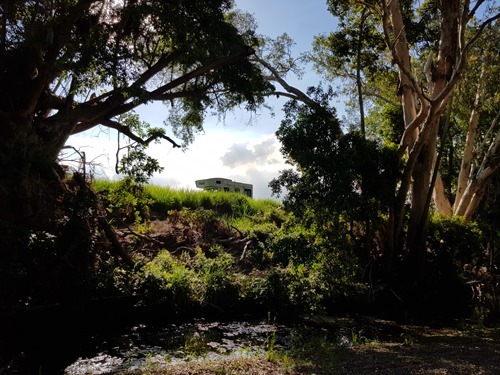 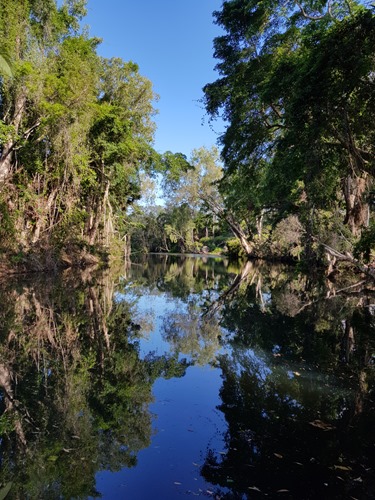 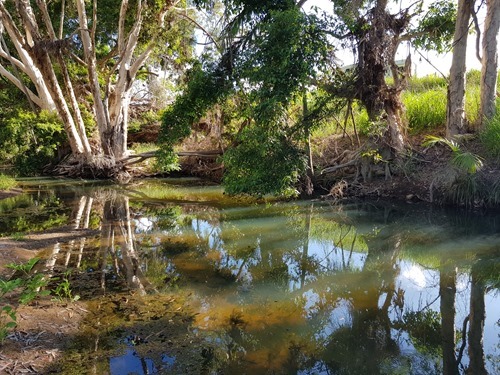 As the sun went down, it just got more beautiful… 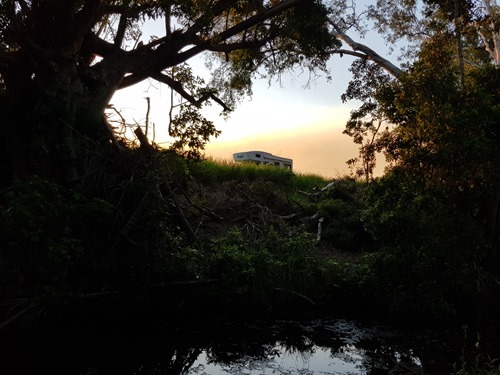 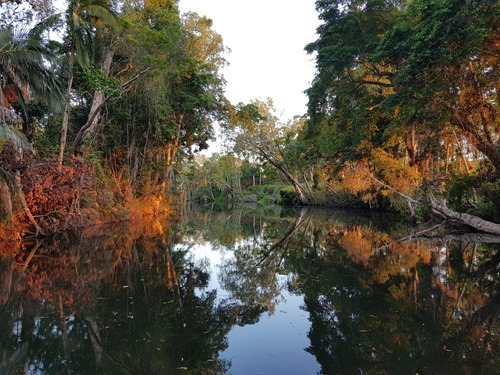 This was just what we needed after all the driving. A wonderful little spot.

The next day we headed up through Mackay, stopping to empty tanks (and refill on water) at the Mackay Rest Area. We popped into the Visitor Information Centre there and ended up booking a tour to the Whitsunday Islands. As mentioned previously, Kalan (our eldest) had chosen – as his “special destination” – to dive near the Great Barrier Reef. We talked through the options with the person at the desk and they ended up suggesting a tour on the Whitsunday Bullet: a catamaran that takes you on a day trip to the Whitsunday Islands – a group of islands just off Airlie Beach that is fairly close to the Great Barrier Reef – which caters to both snorkellers and scuba-divers.

This seemed a great option for us, as three of us would snorkel while the other two did a dive. We were also able to book two nights in the Seabreeze Tourist Park – the closest campground to the Airlie Beach marinas – and make sure the tour operator knew to collect us from there in the morning. Perfect!

With that we could head onwards in the knowledge that the reef dive was booked… no need to stress further. Here’s our route: 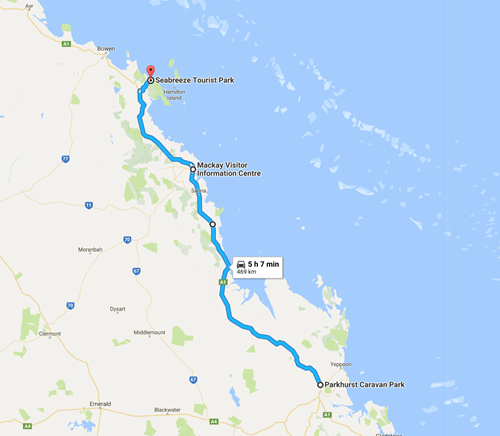 We arrived at the Seabreeze in time for the kids to splash around in the pool for a few hours. Again, much needed after all the time on the road. We went for a quick walk along the sea-front as the sun was setting, to stretch our legs a little. 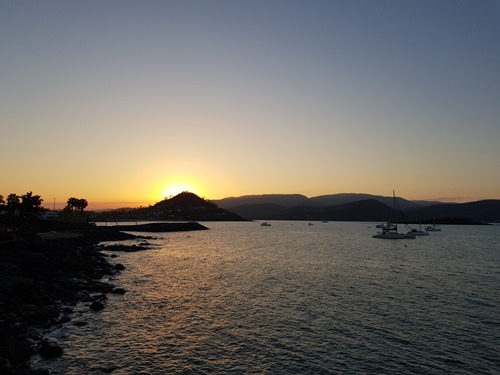 The next morning we were picked up from the Seabreeze and taken down to the marina. That’s when things started to go a little off the rails.

Arriving at the marina I went up to the Bullet personnel there and started the check-in process. I mentioned paying for the dive, and was told “no scuba today, mate”. Apparently the dive boat they partner with had a mechanical problem the night before, so we’d all be snorkelling. After hearing a similar story about mechanical problems back in 1770 (the place, not the year), I was starting to think there was either a conspiracy or that we were cursed.

Anyway – after a long discussion with the manager, explaining about our trip and how important the dive was to our son, they managed to organise a meet-up with another dive boat for Kalan and I to dive from. Great! 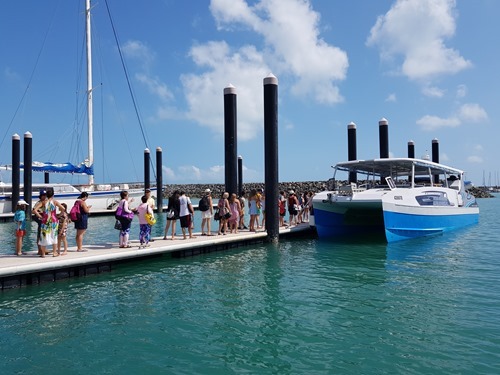 The first stop the boat made was on on the main Whitsunday Island. 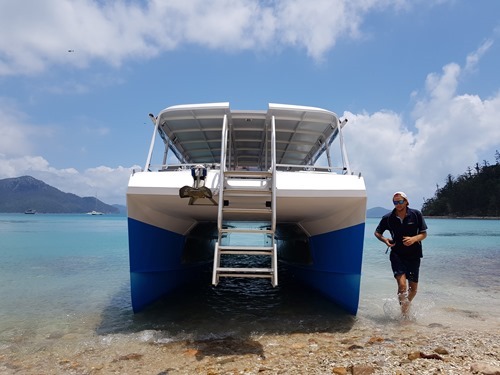 We headed up to a viewpoint across the island… 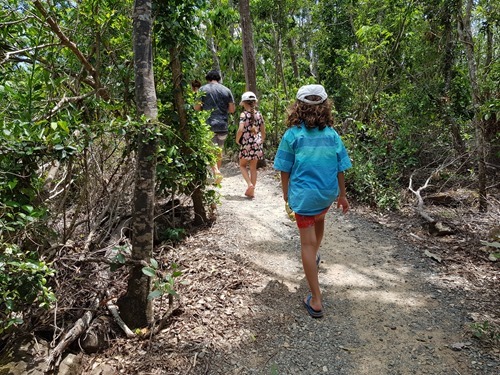 From here we had a brief introduction to the formation of the Whitsunday chain and what makes them so special. And the chance to take photos, of course. 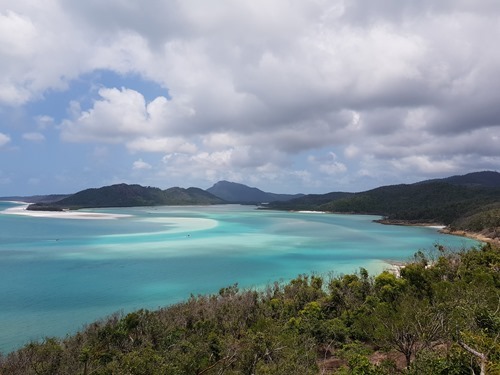 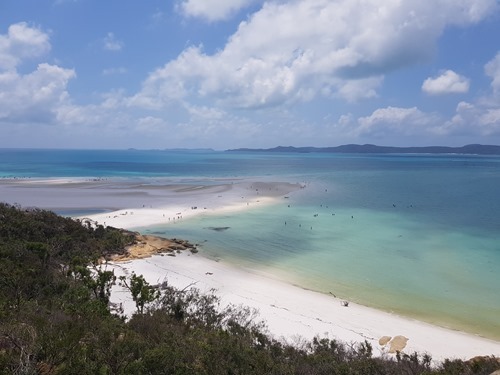 So far, so good. We headed back onto the boat to go around to Whitehaven Beach, one of the most spectacular beaches in Australia (and the world). Its silica sand is unbelievably fine: great for polishing jewellery, not so great for camera lenses and mobile phones 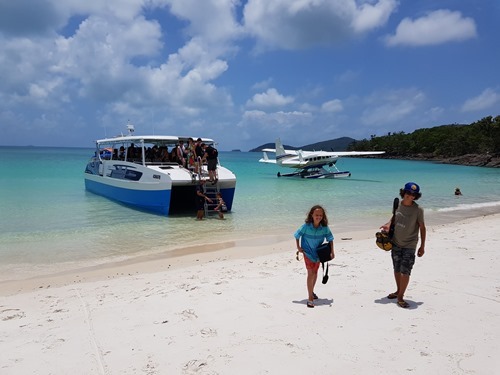 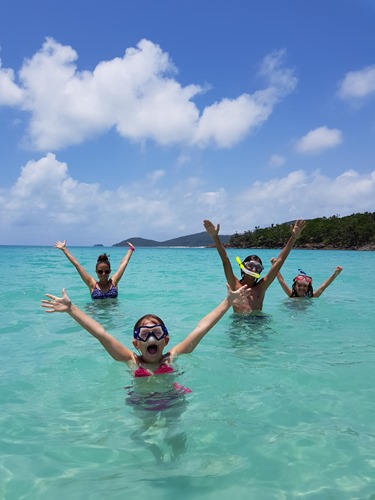 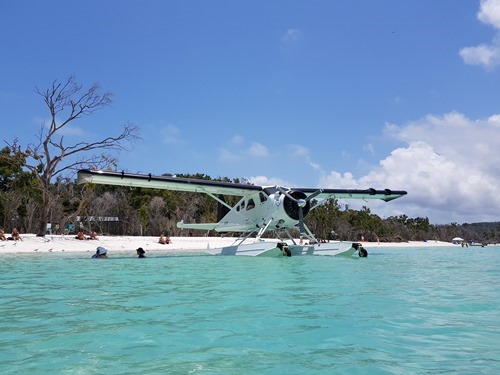 We had a very nice packed lunch on the beach, although we did watch the weather take a turn for the worse as storms approached. 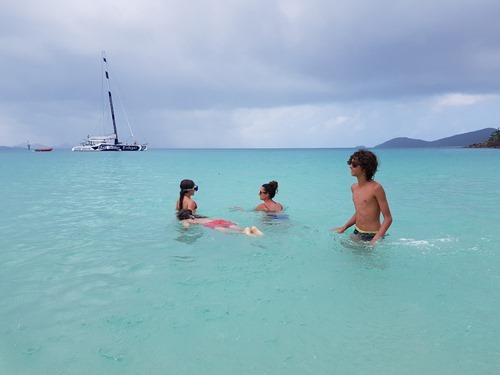 Back on the boat – heading around to the bay on the north of Hook Island – things did get a little gloomy. 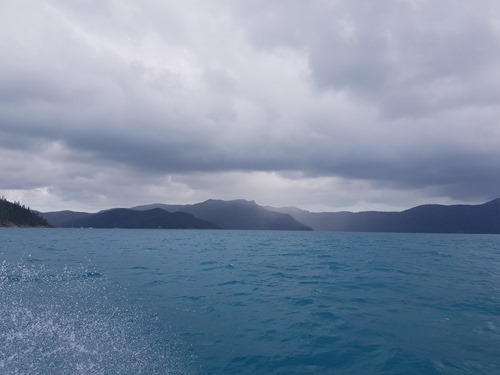 Not the best conditions for either diving or snorkelling, but there you go. Once we got to the bay, we found it already fairly full of snorkellers: while we on a fairly small boat, other boats do go to the same spot (which is also how we were able to arrange a dive with an alternative boat there).

The visibility in the water was already poor because of the weather (which did clear up quite a bit, towards the end) and this wasn’t helped by the volume of snorkellers and beginner divers. It proved to be industrial-scale sea tourism, which wasn’t what we’d hoped for. 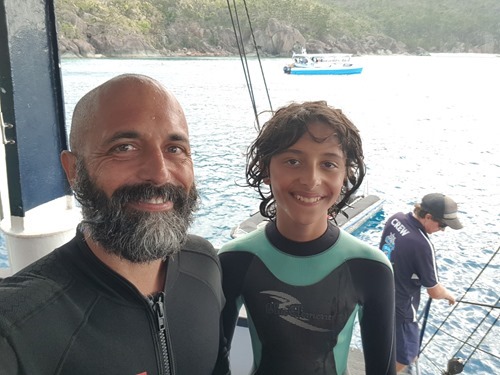 Kalan and I did enjoy our dive – it’s always nice to be underwater – but it was clear they were expecting us to be complete beginners (the operation seemed to cater for intro dives, and there’d clearly been a disconnect somewhere). The saddest part of the whole thing was the tragic state of the coral. The Whitsundays were hit earlier in the year by Cyclone Debbie – on the back of two major bleaching events to hit the Great Barrier Reef in 2016 and 2017, apparently – and the local sealife was close to non-existent. So, so sad.

One of the snorkellers – a diving instructor from the UK, who’s currently working in construction in Melbourne – had recently gone on a dive at the Great Barrier Reef from Cairns. He said he actually saw more on the Whitsunday tour than he had from Cairns, which is crazy… there was so little to see on our trip!

I know the Bullet crew had jumped through hoops to get us a dive, however disappointing. But there’s a whole conspiracy of silence around this that’s scary: it’s like the emperor’s new clothes. Everyone knows the reef-life has been decimated, but they can’t talk about it without threatening the local tourism industry and impacting their own livelihoods. They somehow expect everyone to get back on the boat and be thrilled about the experience – they try their best to convince people they’ve just done something amazing, when in reality it was beyond sad.

The dive further opened our eyes to the horrific state of our oceans (which is why it’s a great thing there are youngsters like Kalan who are motivated to study marine biology). We’ve seen similar things, over the years, that are often explained away by local phenomena (“it’s just El Nino”, we were told in the Maldives back in 2002), but the truth is that climate change is killing our seas.

Anyway, despite the sobering end to the day, we did have a wonderful time in the Whitsundays. And the main thing is that the kids very much enjoyed their respective experiences in the water, even if Celia and I came away a little depressed.