We arrived late Thursday morning in Brisbane: the flight took 1.5 hours, but – due to the fact Queensland doesn’t observe daylight saving – we arrived at 11:40 after an 11:10 departure from Sydney.

When we originally budgeted time for Australia we scheduled 5 or so days for Sydney (which were eaten into by us extending our stay in New Zealand) and then about 10 days to get from Brisbane to Cairns (flying into Brisbane on the 2nd, flying out of Cairns on the 13th). When we came to book a campervan we realized we didn’t have as much time as we thought: our flight out is at 7am from Cairns on a Monday morning, which basically means we’ll have to drop the campervan back on Saturday 11th. Which means we suddenly have 9 days to do the full journey, and when you factor in staying near Brisbane the first night that dropped down to 8. As the drive is a minimum of 1,700 km (not taking any detours into account), this was certainly going to mean we it would be hard to stay multiple nights in any one place – and would mean quite a bit of driving each day – but that’s how it goes.

Another factor relating to this: each of the kids chose one “must see” destination for the 6-month trip. Kalan – our eldest son, the budding marine biologist – chose to scuba-dive near the Great Barrier Reef. So we also have to fit that into our schedule, somehow.

We drove from there to the Lone Pine Koala Sanctuary: Anokhi was so impatient to see koalas and kangaroos that we knew we wouldn’t get far from Brisbane before it became a problem. Lone Pines was really nice – we got up close & personal with both koalas and kangaroos, which was a perfect way to demystify them (and defuse that particular time-bomb). 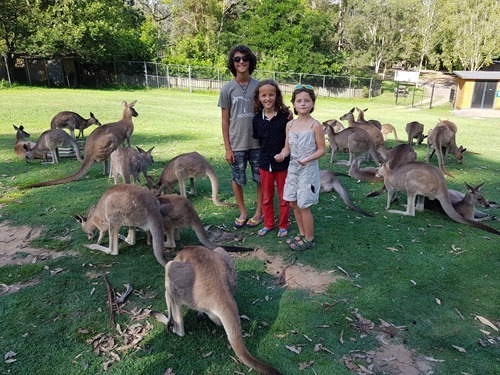 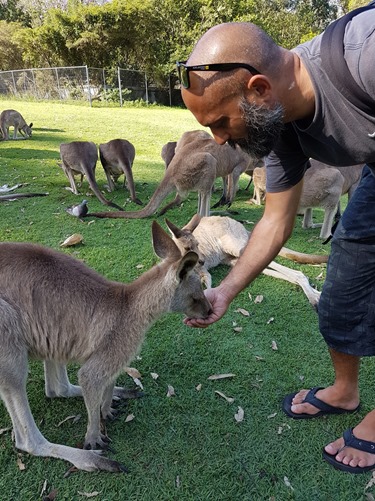 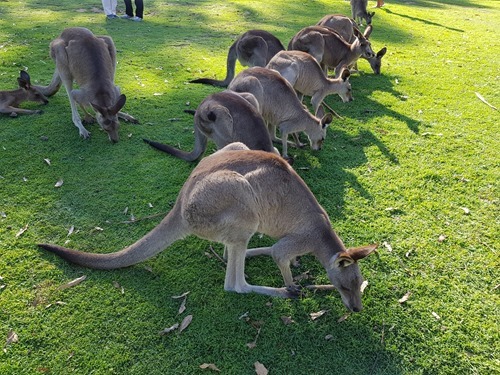 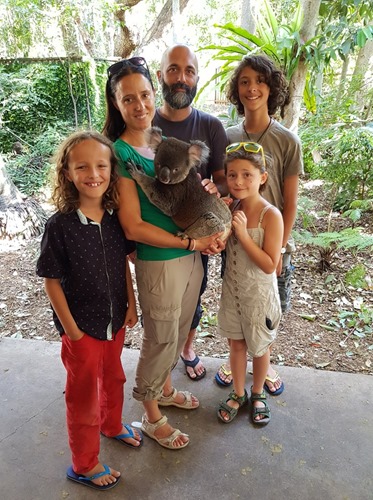 It was nearing 5pm when we hit the road northwards – and we were already further south than when we started – so we inevitably had to deal with some traffic. The SatNav took us along some strange routes through the upper parts of Brisbane, some of which weren’t ideal for a campervan. But hey – we made it onto the main highway north without a significant delay, so it clearly knew something.

Heading northwards up the coast we got as far as Golden Beach before we decided to stop for the night. The sun sets here at 6pm, and that hour makes a big difference when you’re driving: with the nocturnal wildlife – kangaroos in the particular – driving gets interesting after nightfall. We arrived slightly after dark but luckily didn’t have any issues on the road that first night.

The next morning we popped across to the local beach (which wasn’t especially impressive) before hitting the road. Our goal for the day was to reach Rainbow Beach, so-named after its colourful cliffs. We weren’t quick enough to capture the cliffs before they were in shadow, but it was still very nice.

On Rainbow Beach, we saw our first Queensland lifeguard: they have awesome kit! It reminded me of a 1980s Lego (or perhaps Playmobil) set. Too cool. 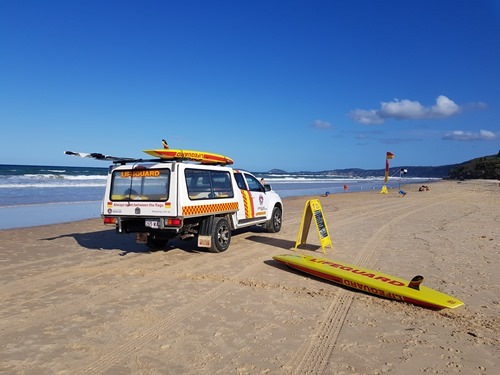 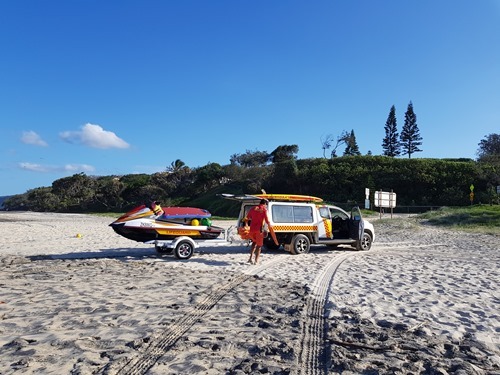 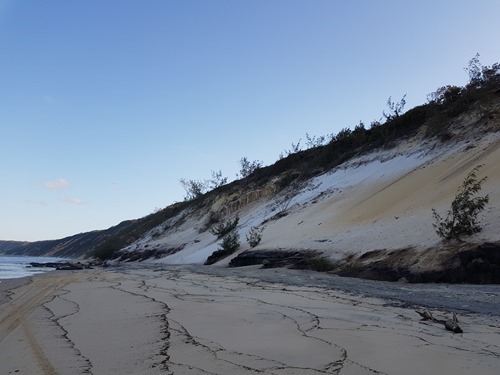 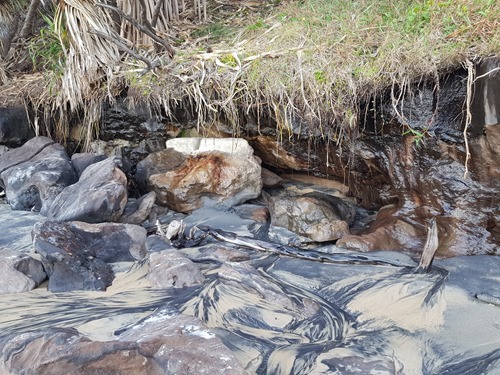 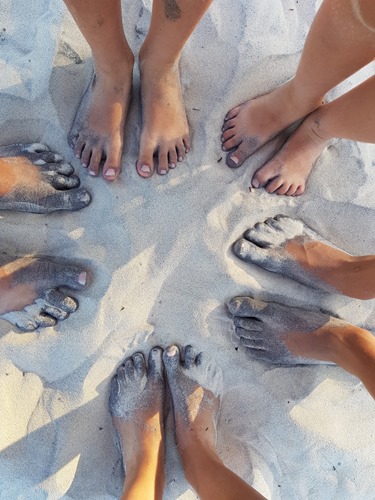 The next morning Celia and I were up early, so decided to try to see the cliffs again (we failed – the tide was too high) and then wandered up to the Carlo Sandblow. This was really impressive – it was a shame the kids missed it. 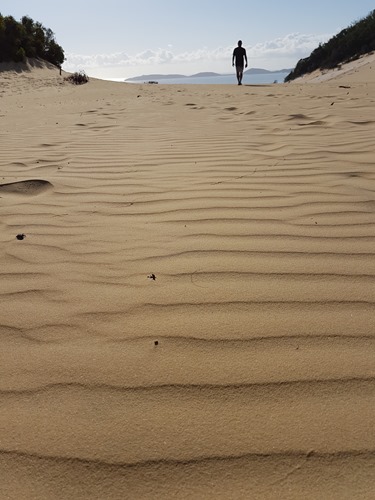 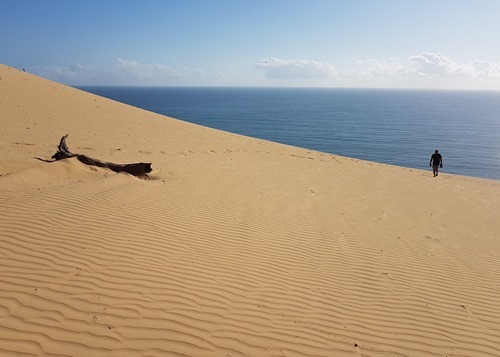 After picking up the van (and the kids), we headed onwards, stopping briefly in the Hervey Bay area, in Urangan. We initially stopped by the marina for a picnic lunch: the highlight was wandering along the flats exposed at low tide to find masses of really cute little crabs that scatter when you approach and burrow spirally  into the ground. The kids found this fantastic fun. OK, yes, I did too.

Then we headed to the pier. Wandering along it, we realized we could hire fishing rods and have a go at sea fishing (something I’ve always wanted to do – I grew up with coarse fishing). This was too much fun – we were pulling herring out of the water, most of which we put back, but some got fed to a local pelican. 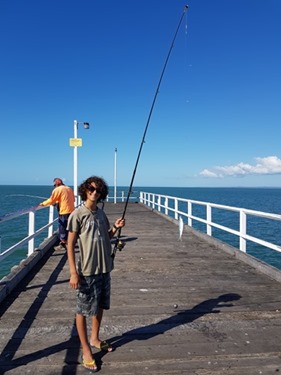 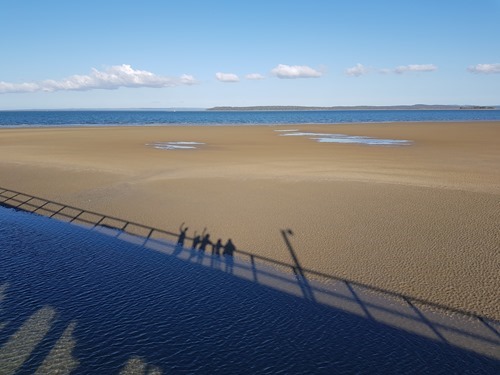 We stayed the night of the 3rd just outside of Bundaberg, a rest area at Sharon Gorge Nature Park. We were really impressed: aside from the decent toilets and picnic tables, this rest area had a free electric barbecue. We’d bought stuff to grill so found this incredibly helpful. 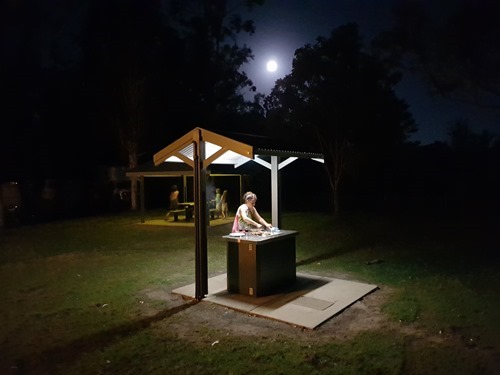 We were up and out early on the Saturday morning, and headed a good stretch of road up to 1770, the town named awesomely after the year Captain Cook discovered it. We were hoping to take a boat across to Lady Elliot Island, at the southernmost part of the Great Barrier Reef, but the boat from 1770 was exceptionally out of service – they were waiting for a part from Sydney and couldn’t guarantee they’d be leaving the next day, either. So we decided to roll the dice and head further up the coast… fingers crossed we’ll find a way to the reef before we leave!

The closest beach to 1770 is at Agnes Water. We spent a couple of hours there, splashing in the waves and watching the surf school.

We had fish & chips (which were really good) at Off the Hook, before driving on to Rockhampton. We took a cheap powered campsite at a place with mostly long-term residents (it was the most “trailerpark” of the places we’ve stayed so far on this trip, with the possible exception of the place we camped back in Monterey). Clean and comfortable, though. 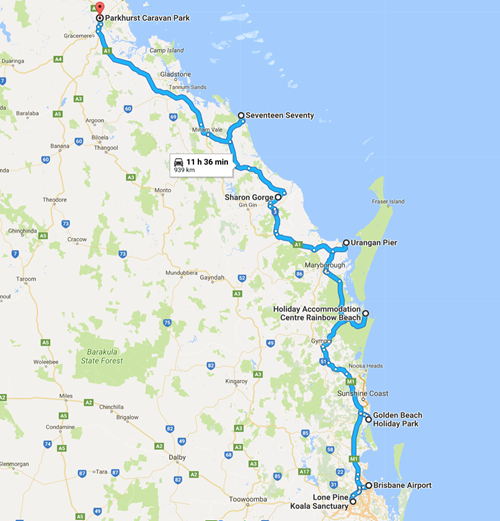 At this point we’ve done a little under half the journey, and used a little under half of our driving days. We do still have to stay two consecutive nights somewhere – if we’re going to get to the great barrier reef we’re going to need to stay the night before and one after, too – so that’s going to mean quite a lot of driving on the remaining days. We could always visit the reef from Cairns, but as this would be just before our flights to Malaysia it would probably mean no diving (you have to leave 24 hours before taking a plane), so this would really be a last resort. We’ll see how things play out in the next post.