Airlie Beach to Cairns and the Great Barrier Reef

After the somewhat disappointing end to our boat tour from Airlie Beach to the Whitsundays, we licked our wounds and headed back on the road towards Cairns. Our next stop was at a very nice Bluewater Park Rest Area – a free campground on the outskirts of the boringly named Townsville. It was pretty nice staying in a place with mango trees growing everywhere: we did pick a few, to try, although the local ants did their best to aggressively protect what they apparently considered to be their property. 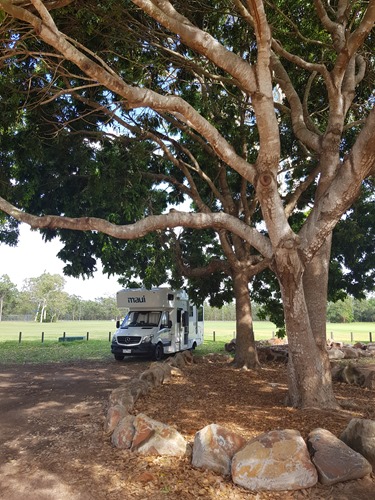 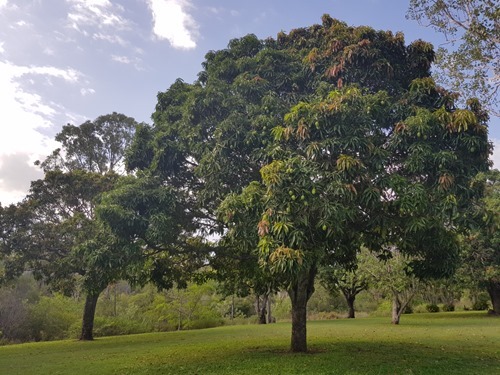 By this point we felt we’d finally broken the back of the journey from Brisbane to Cairns: we were left with a totally doable drive up to Mission Beach for our last night on the road, followed by a leisurely 2-hour roll into Cairns. After which we just had to check into the Cairns Queenslander Hotel and deal with the logistics of returning the campervan. 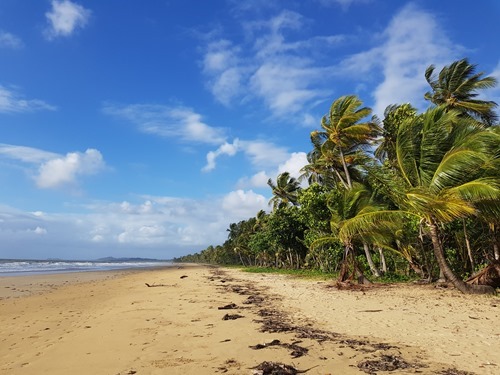 We also took the time to pack all our stuff up, so that when we arrived in Cairns the drop-off would be simpler. 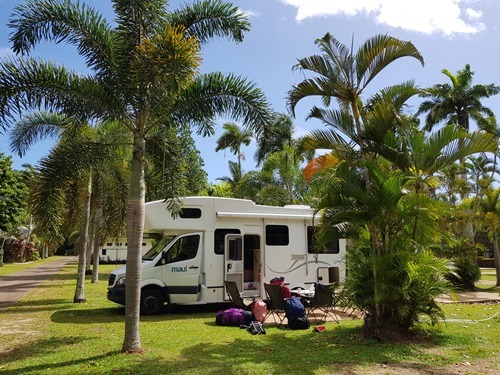 As I was waiting got the campervan to be checked, I had a look at local attractions on my phone. We’d seen a few botanical gardens, along our journey, but the one in Cairns looked really nice (and walking distance from the campervan depot). I called the rest of the family – who were at the hotel while I took care of the administrivia – and they jumped in an Uber to meet me at the gardens. These proved to be really beautiful – a lovely way to spend a few hours. 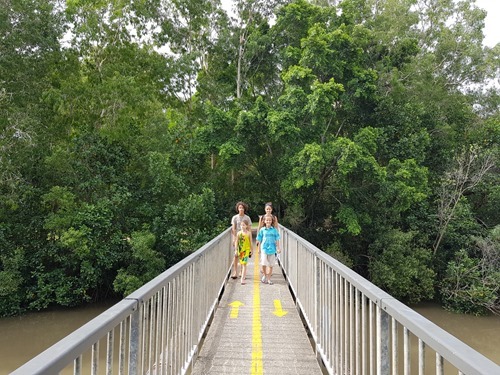 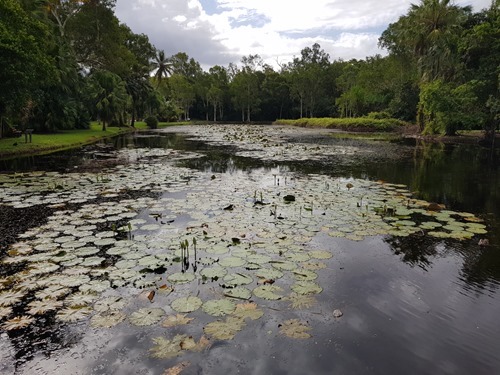 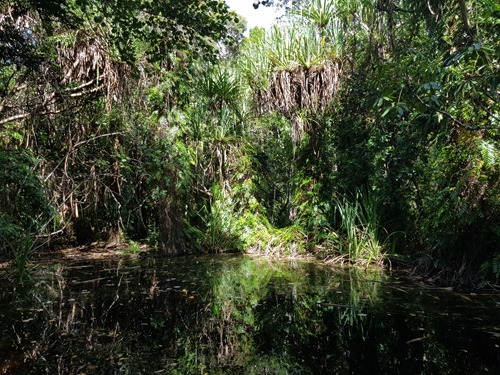 During the walk something was chewing at me, though. The whole boat ride thing had left a bad taste in our mouths, and I didn’t want that to be our son Kalan’s memory of diving in this part of the world. So, as we were walking around the gardens, we went back on TripAdvisor and called around to a few boat companies, to see what our options were for our last full day in Australia.

This was fairly painful… there were a number of options available, but none were cheap (starting at around A$700 for a family of 5, plus diving, etc.), the weather wasn’t expected to be ideal, and I had a horrible fealing we were about to throw good money after bad. In the end we took a deep breath and booked on the Reef Experience, number 3 on TripAdvisor’s list of boat tours out of Cairns. We chose this one particularly because of their focus on scuba-diving at the Outer Barrier Reef: as part of the ticket price people aged 12 or could do a free dive (whether introductory or certified). We also confirmed with them that if we were part of the first group – who would be in the water at around 9:30am – then it wouldn’t be a problem for us to fly the next day via Sydney to Malaysia. Fingers crossed!

The next morning we waited for the shuttle to pick us up at our hotel. 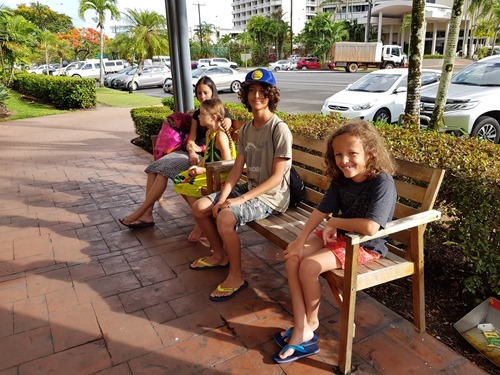 This was really our last chance to enjoy the reef… the shuttle was 10 minutes late, which didn’t help my sense of apprehension. Arriving at the marina, we headed towards our vessel for the day. 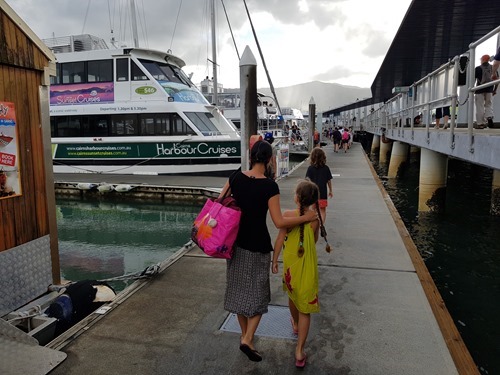 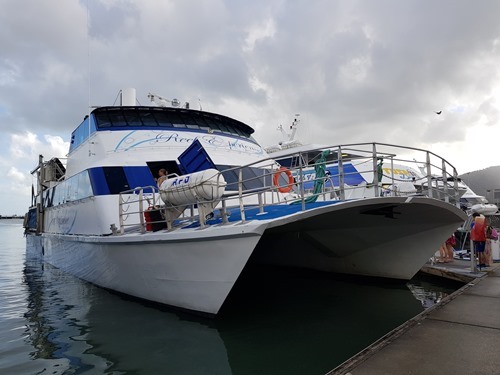 Once underway, we could straightaway see that this was going to be a very different experience from the one we’d had from Airlie Beach. The staff were extremely professional, and it’s clear the focus was on marine-life: exactly where we wanted it to be. We decided to rent an underwater camera so that we could take some shots of our own. The tour also had a couple of professional photographers who would snorkel with everyone, to help capture the day.

We arrived at the first dive site, just off Hastings Reef. As our younger kids were fine on their own, reading, it was a rare opportunity for Celia, Kalan and I to all dive together. 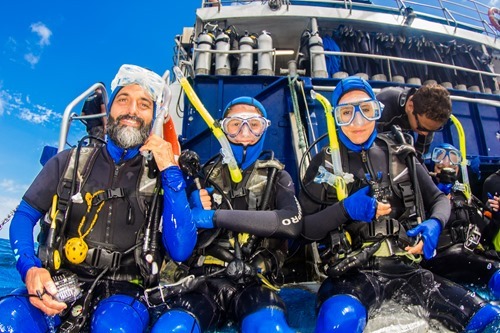 Here are some photos captured by the pros: 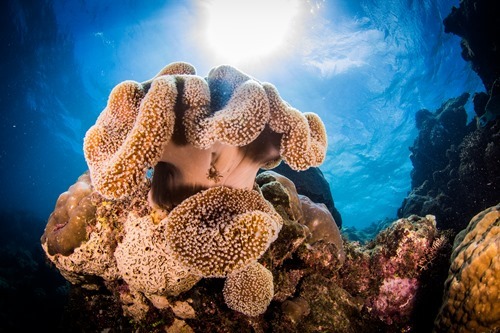 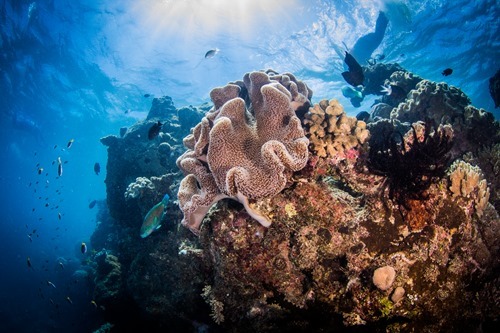 Ours were a little less pretty, but still. 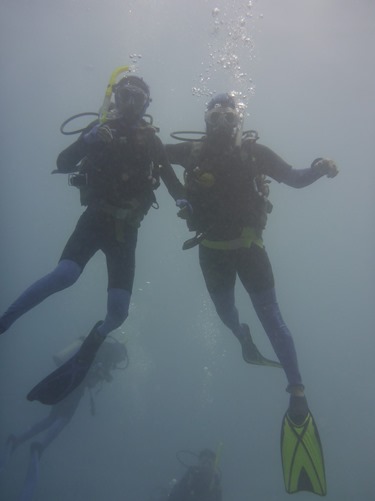 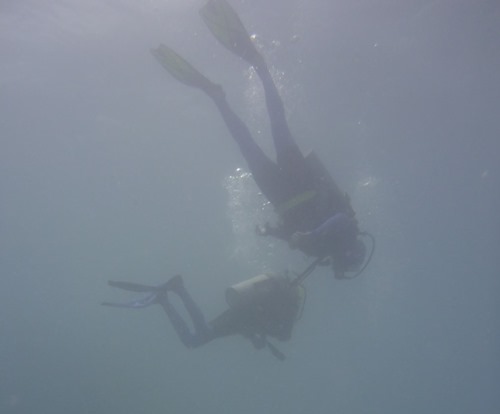 The dive was just what we needed: we were relieved to see that not all of the reef was in a dire state, and it it also restored some faith in the local tourism industry.

After the dive was over, we went out for a snorkel with the other two kids. This was also very pretty, and lots of fun. 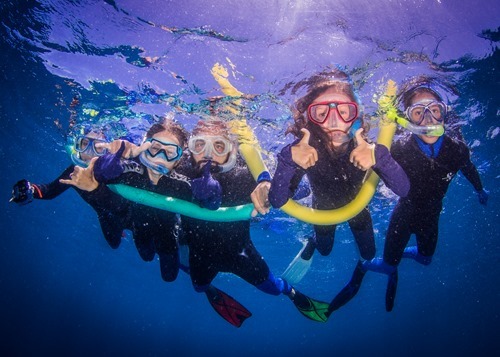 The Reef Experience leave a little glass-bottomed catamaran out on the reef. Anokhi and I had the chance to go out on it while the others stayed in the water: 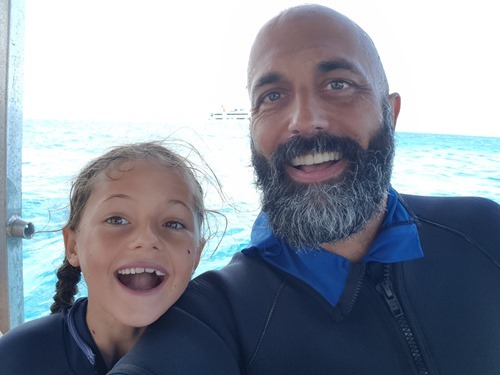 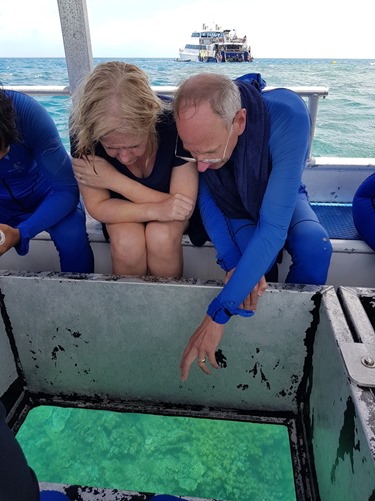 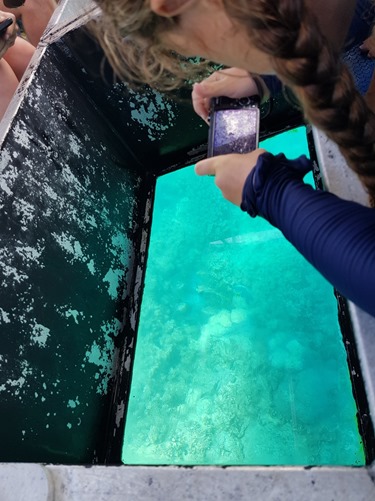 After lunch we snorkelled again over Breaking Patches. Kalan went off on a special marine biologist-led snorkelling tour – of which he loved every second – while the rest of us stayed together. The wind had gone up from 20 to around 30 knots, by this point, so the waves made it really hard to go far. The kids were troopers, as ever, and stayed in the water much longer than we expected. The visibility was also lower – probably 10m vs the 15m we had in the morning – but it was still worthwhile.

Back on the boat we dried out. I took a quick snap to tweet across to Las Vegas – the stinger suits we’d been provided made the boat look like a scene from the Blue Man Show – and we headed back to shore. 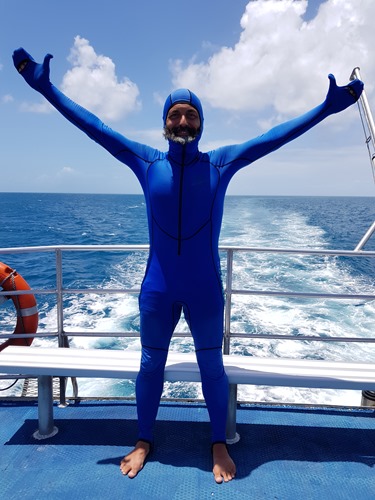 I’m so glad we took the plunge (literally and metaphorically) on this tour. It would have been a real shame to have left the Cairns area without having had this experience. I can only imagine what it must be like when the conditions are perfect!

The next day we got up early to head to the airport for our trip to Kuala Lumpur. More on this next time.