Your input on the future of AEC professions

[Firstly, apologies to regular readers who have struggled to load this blog over the last week or so. Typepad has had the mother of all outages, but things seem to be back on track now.]

One of my oldest friends, Matt Armitage, lives in Kuala Lumpur and participates in a regular show on a local business-oriented radio station – BFM 89.9 – talking about technology. The show is called Mattsplained (abbreviated to MSP) and I have to admit I’m completely hooked on it (I happen to listen to it via Spotify, but I think it’s on all major podcast networks). It’s partly great to hear Matt’s voice on a regular basis, but it’s also very interesting to get Matt’s take on happenings in the tech universe, especially through the lens of someone living in Malaysia. (Matt also writes a really interesting Substack, too.)

In recent episodes Matt has covered the evolution and application of AI-based tools such as DALL·E, Midjourney and now Stable Diffusion, and how they’re starting to disrupt industries such as advertising. Matt has also touched on how generative design tools are starting to impact architectural professions.

We’ve had a bit of a side discussion about this that I thought I’d share here for people to comment on. Matt’s position (or concern, I should say) is that assistive AI will stop people from training for and entering industries. I’m coming from a position that the jobs market – and people’s roles – will continue to evolve, and the requirements for entry-level roles will shift over time.

Neither of us are architects b y trade – I work at a software company and Matt is (when he’s wearing this particular hat) a journalist – so I’d really love to hear informed opinions/anecdotes about what’s actually happening in the industry. Are we already seeing changes brought about by technology disruption due to AI? As a side note, it really wasn’t so long ago that this was a common scene… 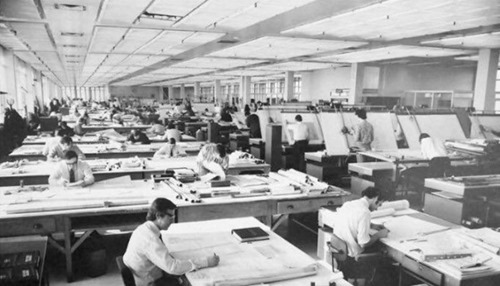 Here’s the gist of our discussion so far. It was via WhatsApp, so both the conversation and its grammar were truncated accordingly.

KW: What we're seeing in architecture is a shift from traditional architecture jobs towards "architectural technologists" who can help implement computational/generative design and general automation. (Increasingly ML, too.) The next generation of architects will also be coders, as otherwise we won't have the resources to do all the work previously done by now-retired Boomers.

MA: That’s kind of the point. An increase in ‘less skilled’ positions. It’s more about the gateways to professions. That’s why I used advertising as an example. Advertising starting positions routinely ask for 2-3 years experience now. Because the industry doesn’t have enough money to train from the ground up anymore. Add in iterative design tools and that problem swells. If the machines are occupying the entry points, you create a barrier. So the dynamics of the  professions are upended. There are very few entry level positions, so the path to becoming a decision-maker is interrupted. None of this is insurmountable. It’s also that technology isn’t creating more jobs than it replaces any more. I’ve done a bunch of shows on people essentially becoming the manual army that feeds the machines.

KW: What's a gateway position in architecture look like? Most people I know have architecture degrees or – these days – are BIM specialists. Their jobs should both be getting easier with automation, and they'll be happy not to have to do years of scutwork to pay their dues. Maybe advertising is different, but that seems like an industry with a very different set of disruptive forces...

MA: Different industry but principle’s the same. A gateway position is the first post-qualification job in the profession. The tools make it easier but reduce the number of qualified architects and assistants a practice needs. Because it’s all about doing more work at lower costs. So competition increases – fewer positions available, versus the seven years needed to train and the associated costs. It becomes a gamble rather than a life choice. The technology assists those within the profession but acts as a barrier to those outside who want to join. They’re competing with the machine. We’re starting to see the same pressures in law and accounting, where the machines are doing the work of the juniors. Hence the question about where the decision-makers come from in two generations time. Architecture may have more time than accounting, law or advertising but that seems to be the way the trends are heading. A few years back I did some shows about AI and C-suite positions. In lists of endangered jobs and positions, board member positions are never mentioned. I argued that in companies that are market driven, those should be the first positions given over to AI. Because AI is already driving the markets. Therefore, the heads of companies should be able to converse with the market at its maybe speed and language.

I will admit that this discussion is making my head spin. I have lots of opinions, but I suspect many of them were formed by working for nearly three decades to help bring automation to the industry. I also have a firm belief that whatever my own misgivings are about a market-driven economy, the system should self-regulate to accommodate technological advancement: the goalposts will shift – and yes, sometimes to the detriment of individuals – and while sub-systems might fail, whole industries are much more resilient.

But I don’t know what I don’t know. What are your thoughts? Please post a comment via the blog or on LinkedIn or Twitter, should you have something to add to the discussion.