Another Autodesk University is over

That’s it for another whirlwind AU!

This year’s AU was a very different one for me. Normally I’m delivering a class or two and end up spending several hours in meetings with customers – I almost never get to spend time in the Expo. In contrast I spent almost all of my time at this year’s event in the Expo standing on or talking about a bridge, so I can’t give any meaningful commentary about the broader event, sadly.

One thing I will say – beyond whatever takeaways people have related to the change of venue (New Orleans over Las Vegas) or the focus of the sessions or keynotes (none of which I attended) – is that it was so nice to see people again in person. I have missed that so much. For me the event could have been held in a cow shed and I’d probably still have given it a double thumbs-up.

I will say, though, that if there was an award for least helpful AU badge, I think mine would have won it easily. I must have messed a few things up when filling out fields during registration: my location was simply the village I live in – unknown outside of the Swiss canton it belongs to – and my title was so long as to be completely illegible. It’s a miracle anyone knew who I was – I guess I have this blog to thank for that. ;-) 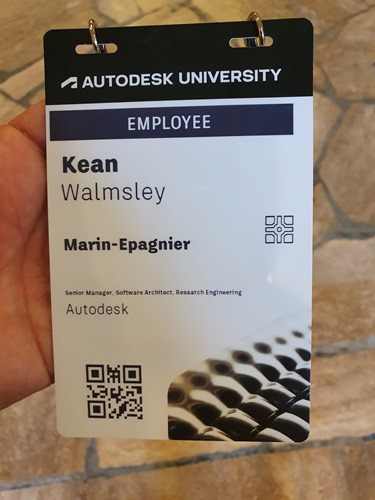 The event was held in the convention centre in New Orleans, Louisiana. 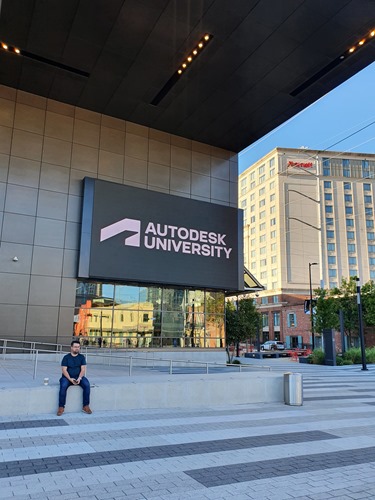 Most of my trips across from the nearby Hilton Riverside to the centre were with Pete Storey, who led the Dar bridge project. 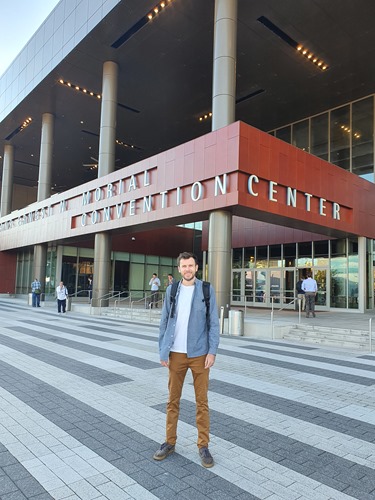 I didn’t even end up going to any fancy New Orleans restaurants, which was a bit of a shame as I heard there were some outstanding options. I did manage to eat twice at Mother’s, a place I’d eaten at 20 or so years ago with my wife on our first trip to the city. 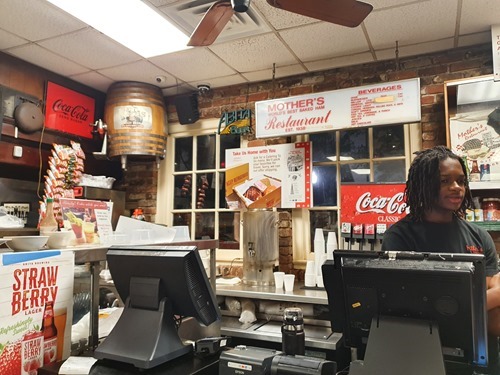 It’s a local institution, as well as a bit of a time machine. It hasn’t changed in 20 years (and quite possibly 50). Back in the Expo, here’s the area the bridge was in: the Product Design & Manufacturing section of the Autodesk stand. I was doing my best to get as many Autodesk logos in this shot as I could. 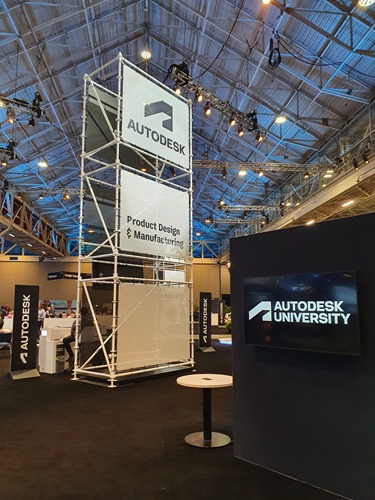 During the event we were limited to letting one person on the bridge at a time – despite it having been designed to support 2.5 tons – and only those involved in the project. Here’s a shot of Ghassan from Dar – who’s team worked with us on the design of the bridge, and who now effectively owns it – as one of the rare non-Autodeskers to be allowed onto it. 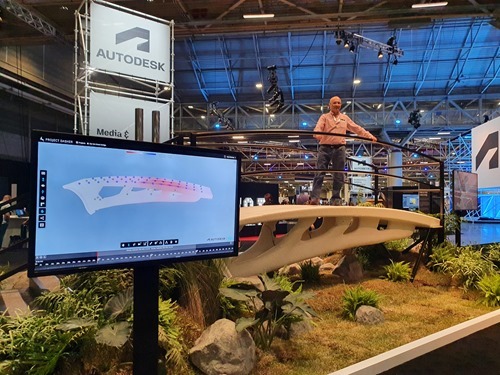 I did ask Albert Szilvasy to walk on the bridge as both sets of sensors came online: we have FBG sensors in the deck and traditional strain gauges in the supports, but prior to that we were mostly just looking at live data from the deck. This is the first shot of data being displayed from both. 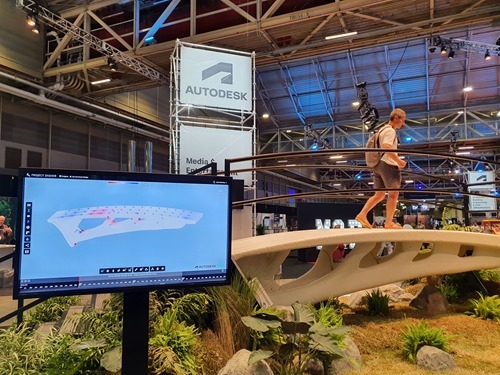 We found that having someone on the bridge really brought people in, especially as it made the bridge inside Dasher so much more colourful. I ended up on it quite a bit. Thanks to George Kartvelishvili for taking and sharing this photo. 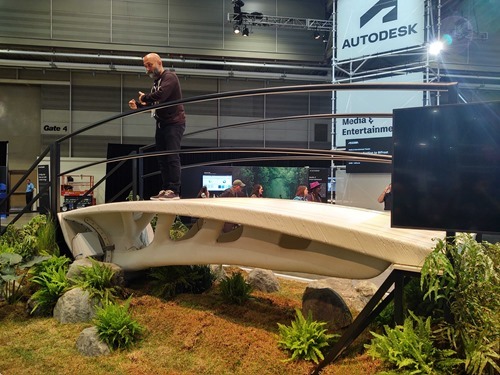 Here’s a shot of the various members of the bridge team: Gonzalo, Pete, Ghassan, Taylor, Stephanie and James (with me on the bridge). 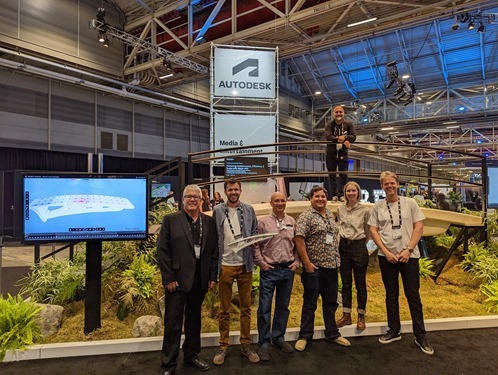 There were often big crowds in front of the bridge – there were regular tours coming through, and we gave many impromptu explanations from up on the bridge. Here’s a photo I took from the bridge itself. 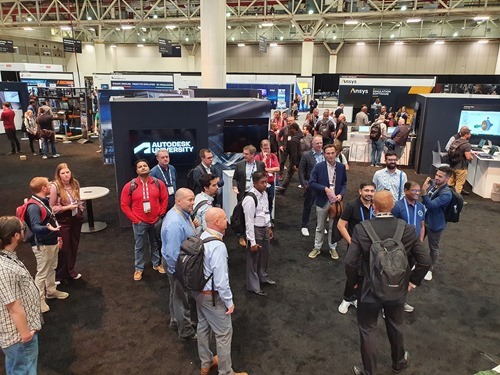 We had fun, too: here’s an action shot of Pete giving the bridge a bit more of a test. 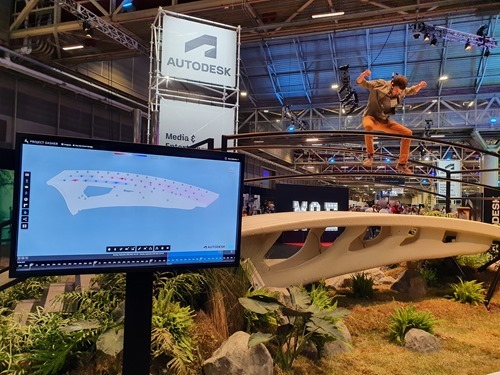 And you can see the results inside Dasher. He’s really not that heavy. 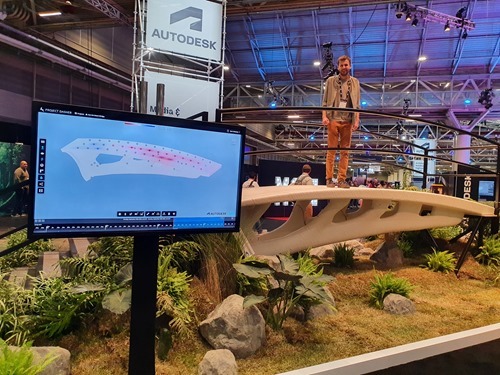 So yes, for me this year’s AU was about reconnection. Here are some photos I took of/with various old friends and colleagues. 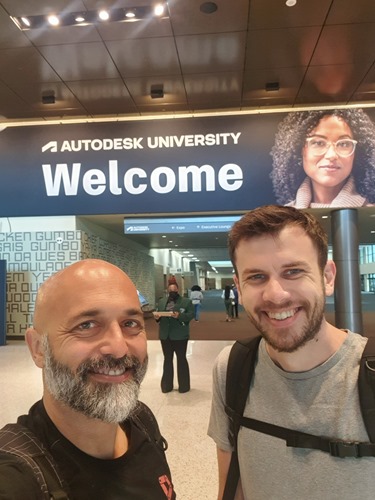 I know exactly two people named Radhu, and at a party hosted by Symmetry and Matterlab I was lucky enough to catch them both together. 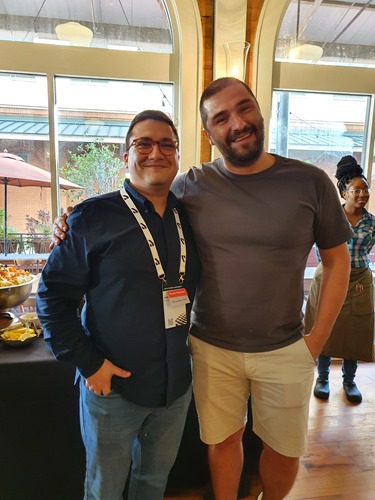 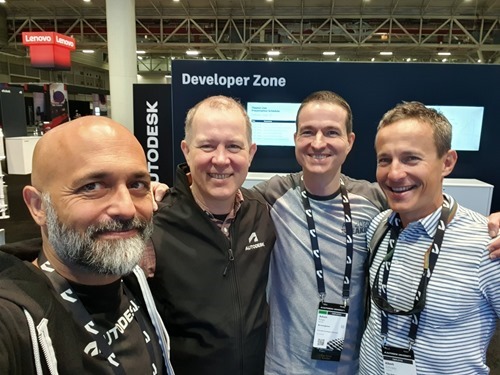 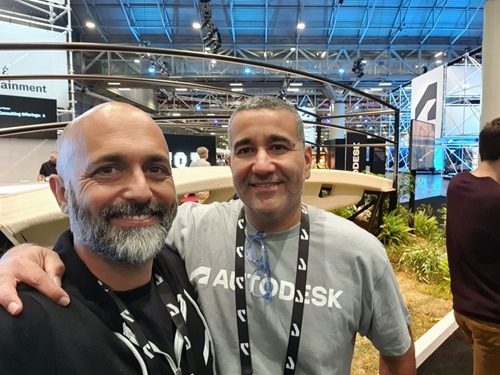 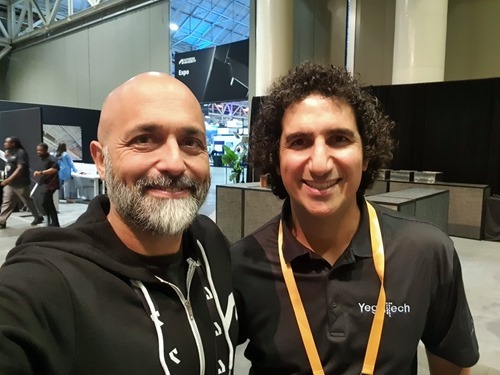 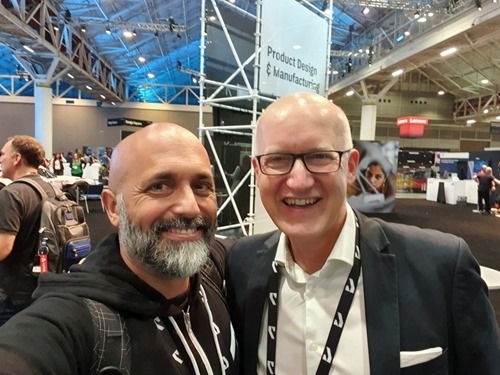 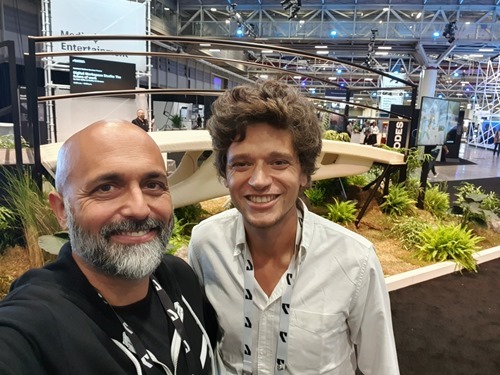 With friends we’ve done business with to deliver projects… 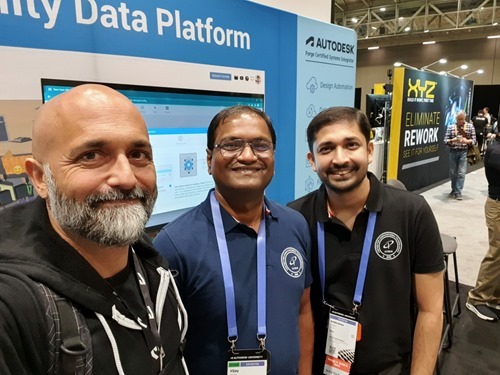 I had fun hanging out with Nono, Mercedes and Varvara at the EvolveBIM party. 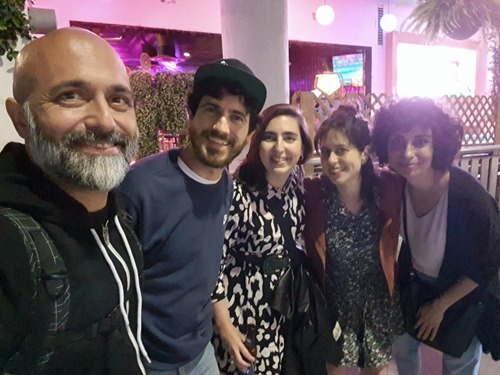 As we left I asked everyone to point to where their hotels were… part of the “fun” of this year’s event is that we were all quite dispersed. 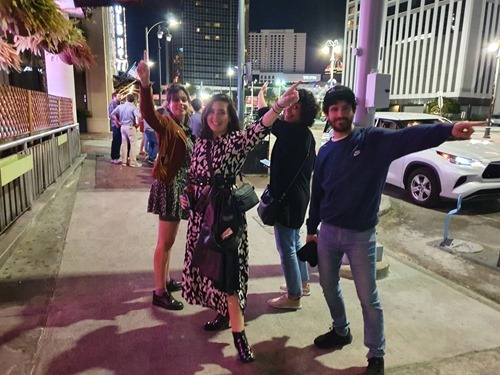 On the last night a group of us from Research headed to Frenchmen Street, which is apparently where the locals hang out (Bourbon Street is more for tourists and muggers). We started at Cafe Negri, which really was the best place we went to that night. The live music was top notch. 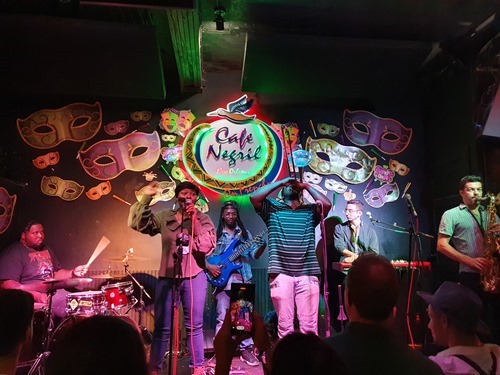 We weren’t the only ones to think so, either. 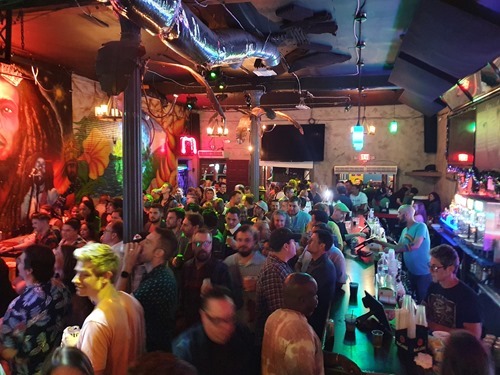 I like this photo from outside Cafe Negril, taken as we headed to another couple of bars. 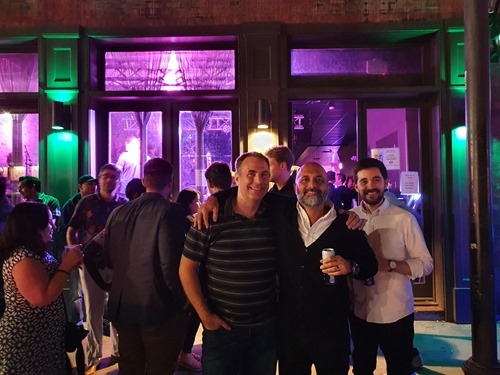 Here’s a group shot from one of those bars. This is probably most of the Research team that attended AU, this year, plus a few others that are Research-adjacent. I’m now back home, nursing a mild case of jetlag and a less mild case of exhaustion. I always really enjoy AU, but I need some days afterwards before I feel normal again. Thankfully I’m being forced to take some time over the next few weeks as the kids are off school.

I will say that I’m surprised not to have fallen sick on this trip… I did after the last event in the US – at TechX in Atlanta – but given the sheer volume of people I spoke with, the only real possibility is that I have some residual immunity from the last bout. In any case it’s a relief not to be sick through the beginning of holiday, that’s for sure.