« Come to the Forge Data Day in Munich on Tuesday! | Main | The Autodesk Tandem API is now in Beta »

The Forge Data Day in Munich

Today I’ve been in Munich for the inaugural event in the Forge Data Days tour.

As I decided to attend at fairly short notice, I didn’t even look into flights: flying from Geneva or Zurich to Munich is expensive at the best of times (considering the distance), and with less than a week of advance notice it would have been ridiculous. So I took the bus, which cost about $20 each way. 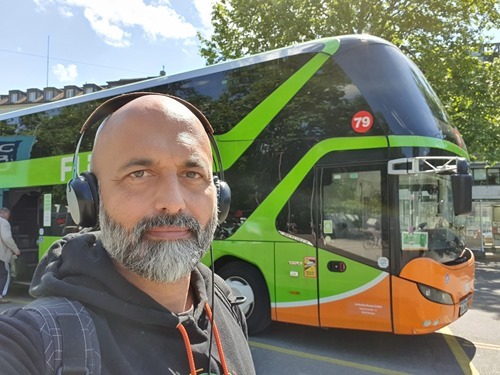 It’s an hour and half to get to Zurich from my place, and the direct bus to the centre of Munich took another four hours. Not bad, really.

I had the chance to catch up with Sergio, Cyrille and Jim for dinner when I got in. Others in the Developer Advocacy & Support team arrived later, and so unfortunately missed dinner. 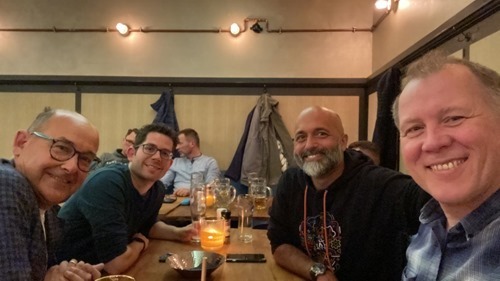 Some of the team stayed at the INNSIDE hotel in Parkstadt Schwabing. I liked the building that was opposite their hotel. 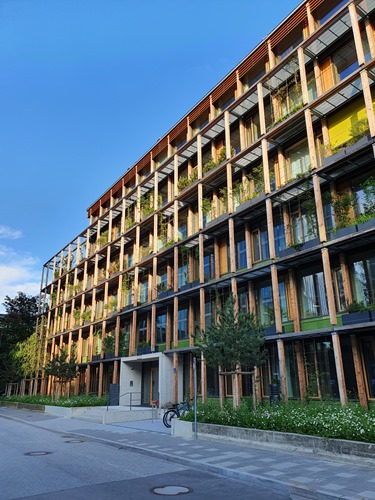 I stayed around the corner in the Ibis. It’s basic but clean, and had a nice view from the 8th floor. 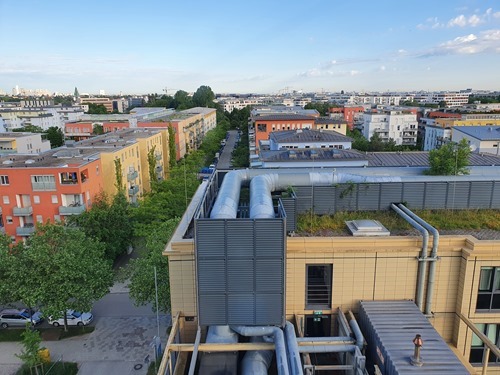 When I got to the event venue – the Design Offices – I realised that the view from there was far more spectacular. 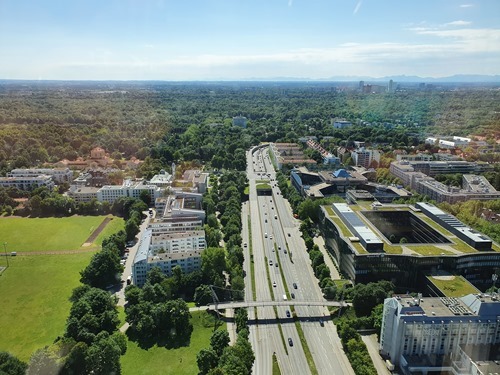 It really was a lovely event venue. 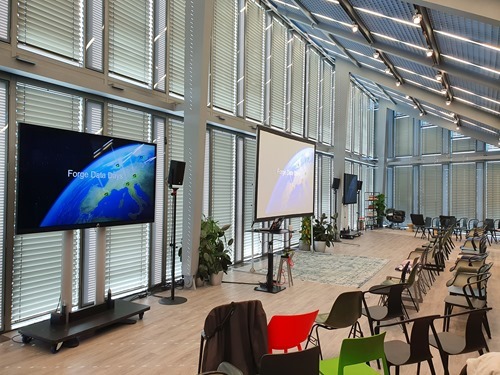 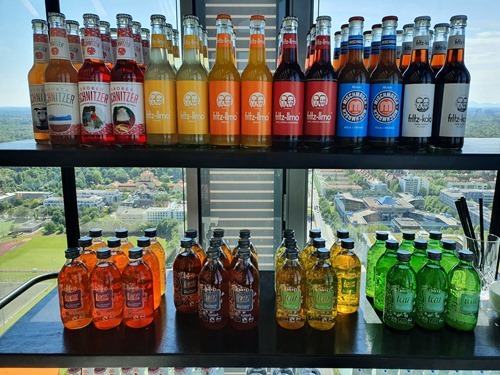 I very much enjoyed the rooibos iced tea. 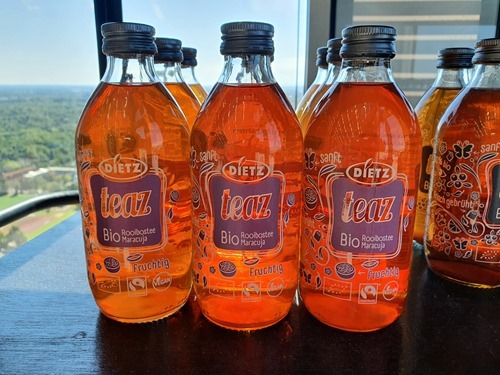 The event was well attended – lots of familiar faces in the audience, too! 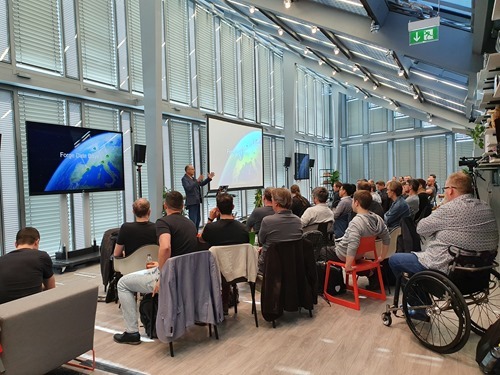 Jim Quanci always invites his team up to present them to the audience. 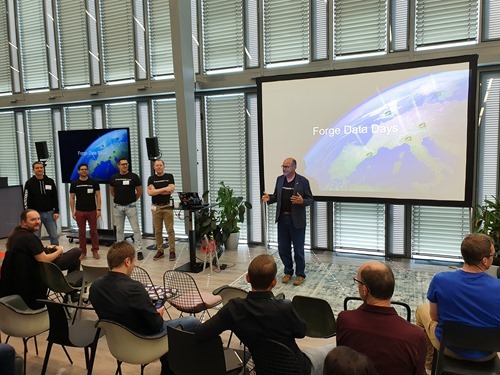 Having worked in the team myself for many years, I’m considered an honorary member. And it is indeed an honour! 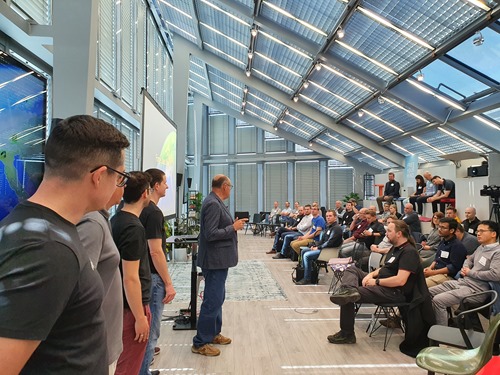 Jim started the morning session with a high-level introduction to the Forge platform. 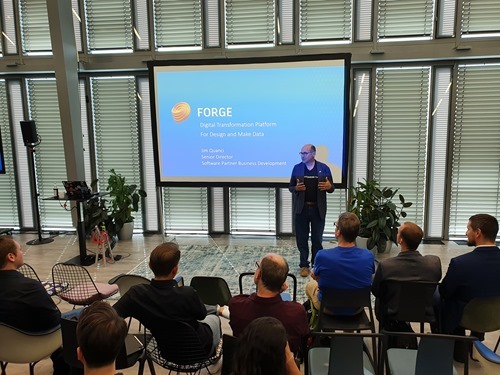 At one point Jim brought up a slide showing our various System Integrator partners. 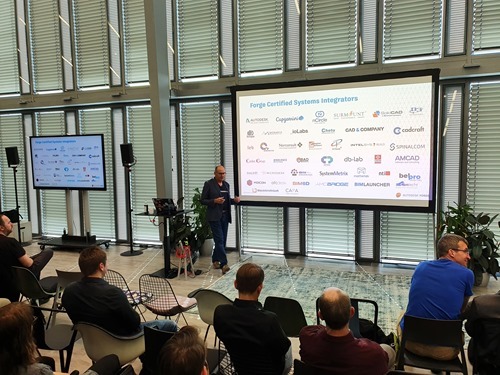 One of the key benefits of Forge is around data aggregation and contextualization. Here’s a look at some standard model properties. 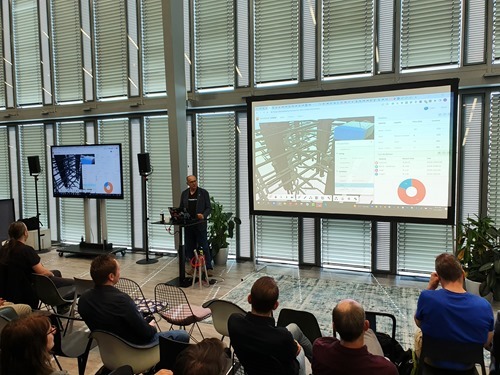 Digital twins are clearly a hot topic, these days: we have upwards of 100 partners working in this space. 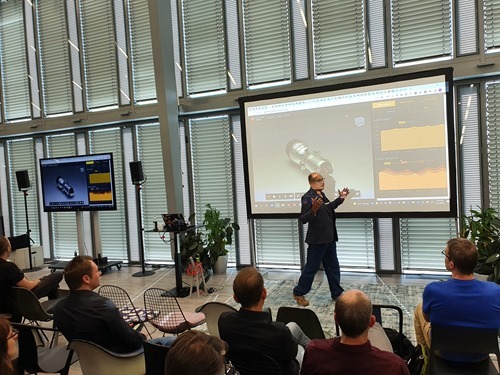 Here’s another view across the venue. 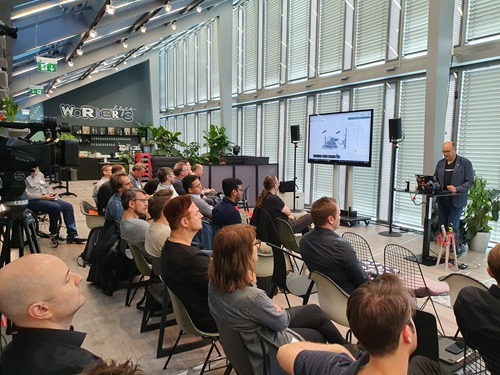 It’s always nice to see the Data Visualization extension showcased, given its connection to Dasher. 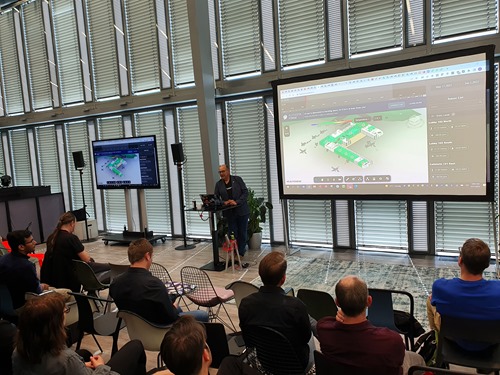 Here’s an aggregation of some slides Jim showed on digital twin architectures.

Here’s a quick slide on what’s been delivered in the Forge viewer, over the last year or so. 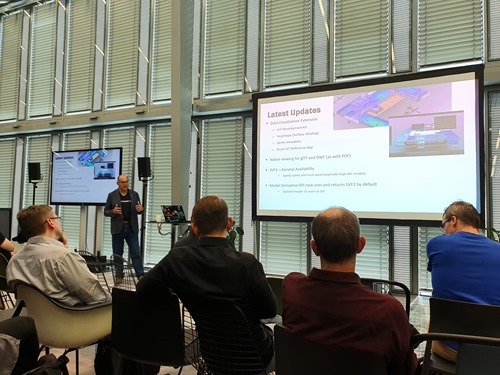 And another on some things that are coming. 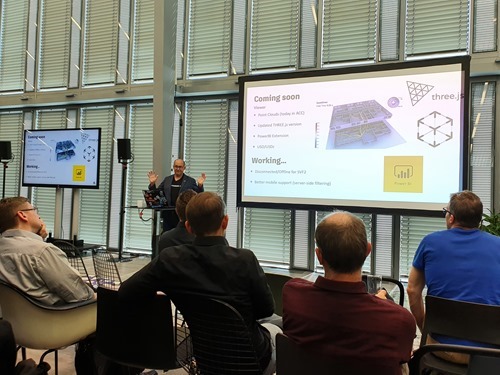 In the afternoon the “deep dive” started, with Cyrille Fauvel talking about core Forge Data services, including the Model Properties and Data Connector APIs. 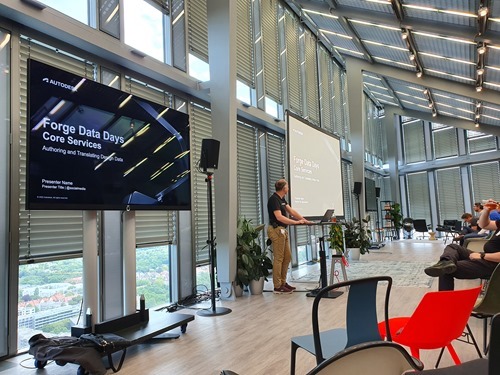 From this angle my camera picks up some crazy polarization effect on the projected image that isn’t visible to the human eye. I rather like it. 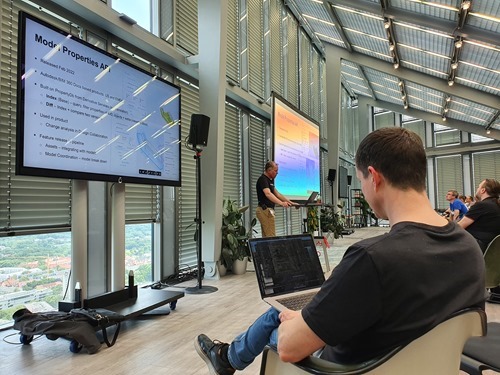 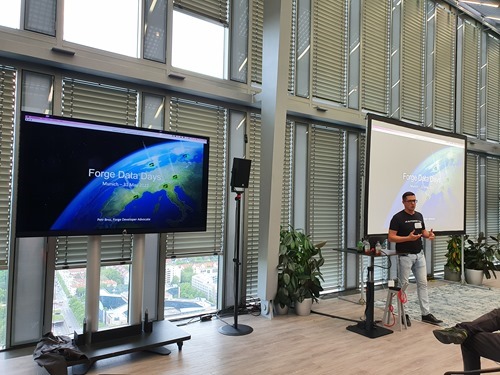 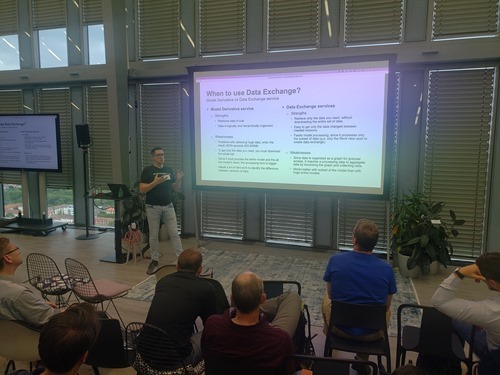 Adam Nagy then talked about GraphQL, an increasingly important tool in the Forge developer’s box. 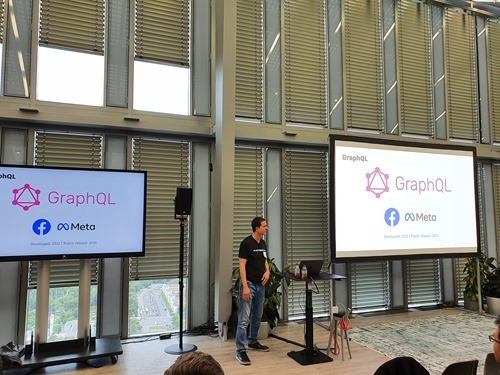 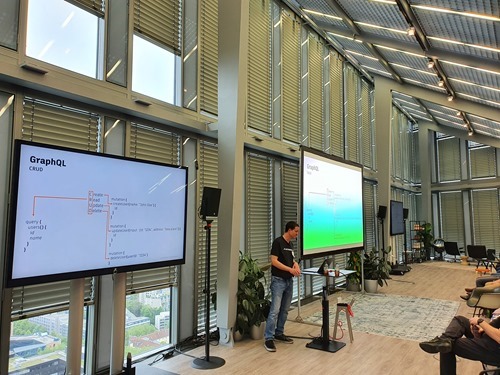 Adam wrapped up the day’s technical content with a session on the new Fusion Data API. 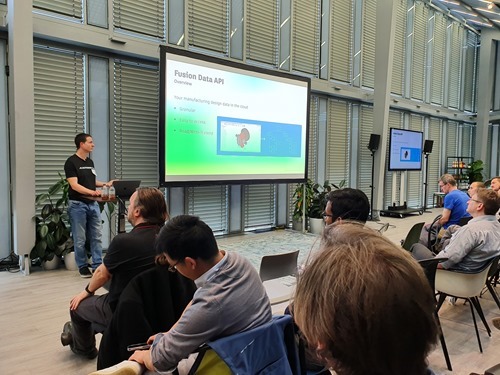 These events are always great for catching up with old friends and acquaintances, something we’ve missed over the last 2.5 years. Here’s a photo with Jens and Christian from coolOrange, who used to work for Autodesk, back in the day. I actually took this to send it to my friend Francesco, who works with these guys on a regular basis. 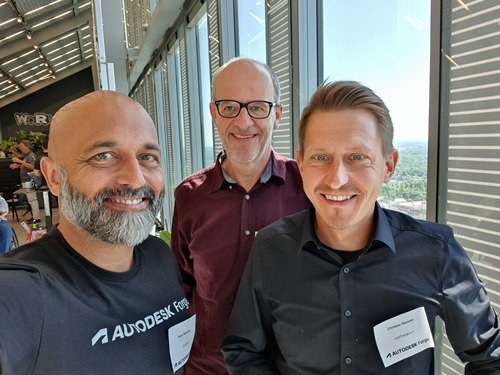 Here’s a photo of the whole group. 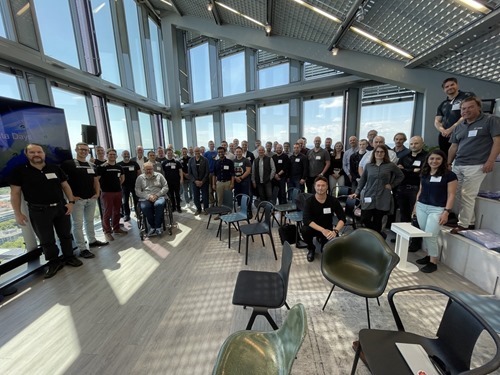 This evening I had a nice dinner with Jim’s team, before they all head onwards to Gothenburg. 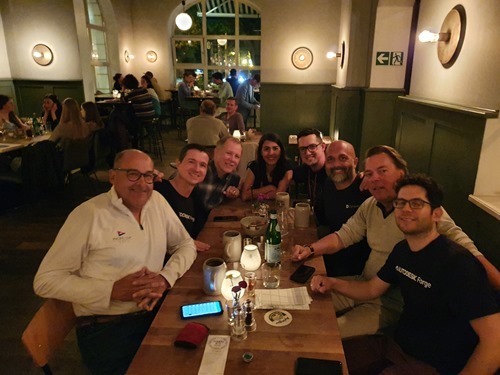 Tomorrow I’ll be hopping back on a bus to Zurich, first thing in the morning.

It was great to be back at a Forge event. I learned quite a bit about what’s coming (and now available) with the Forge Data APIs: I’d recommend attending an event on the tour, if you get the chance.