Colleagues in Autodesk Research have been working with Dar Al-Handasah on a project to 3D print a series of footbridges with integrated sensors. It’s similar in some ways to MX3D’s Smart Bridge Amsterdam, but printing with plastic rather than steel.

I’ve talked about the bridge at a couple of events, now, so I thought it was time to share some more information about this fascinating project.

My role in the project is, once again, fairly minor: I’ve been helping with the visualization of sensor data from the bridge inside Dasher (more on that later on), but it’s been fun to have watched the project unfold from afar. Many thanks to Peter Storey, James Donnelly and the rest of the project team for sharing the information and imagery included in this post.

Fusion 360 was used to generatively design the initial, 2 metre-long bridge to be printed using ABS. 2 metres is actually a rather short bridge – as you’ll see at the bottom of the post when you see people standing on it – so please keep in mind that this is very much an initial proof-of-concept before a longer bridge will be manufactured.

Here’s an animation by Ben Weiss showing the generative process in action.

Before printing the full bridge, a scaled down version was printed using a traditional 3D printer, in this case a BigRep. It’s hard to tell the scale of the bridge from the photo, but it is quite a bit smaller even than the 2-metre version. :-) 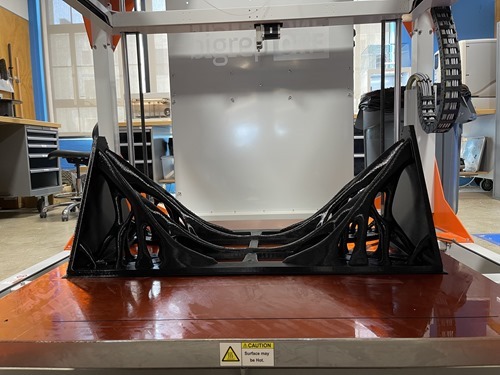 The final 2-metre bridge was printed robotically. Here’s a short GIF showing the process being applied to print a test section of the bridge.

It took roughly 50 hours over the course of 5 days to print the final 2m bridge. The printing made use of a closed loop process: the robot adjusted its printing speed based on the temperature measured at the print head, allowing for much more reliability and consistent results.

Here are some nice shots of the printing happening in our Birmingham Technology Centre. 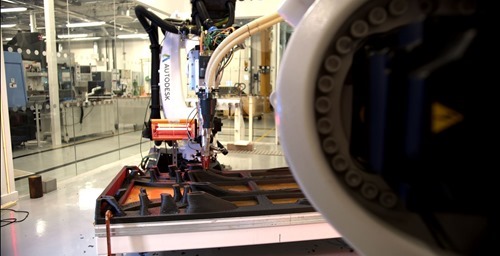 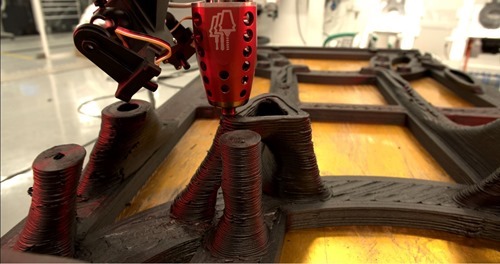 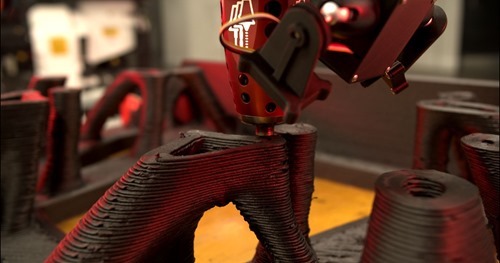 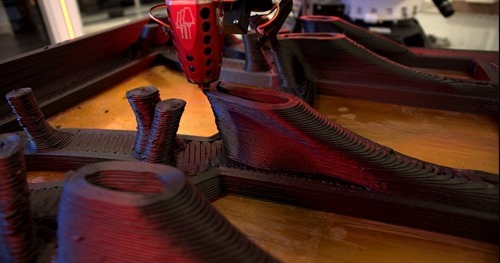 Here’s a view of the completed print job. 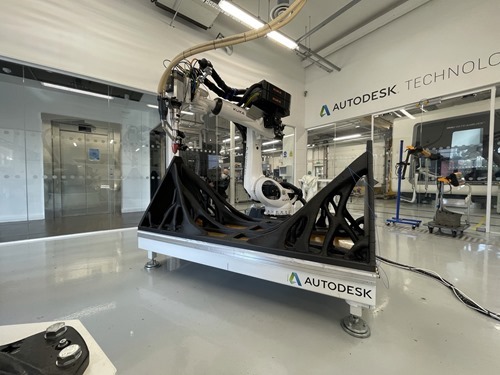 Another thing the team did was to analyse the temperature values recorded during the printing process to understand potential future strength issues. This data was then overlaid onto the 3D model inside Fusion 360 using its API.

Green means the printing temperature was optimal (110-140°C), while yellow/orange means there are potential interlayer strength issues (the temperature was 80-110°C) while the danger zone of <80°C is indicated in red. It’s super-interesting to see this data displayed in this way (it should come as no surprise that I think so, given the focus of Project Dasher :-). 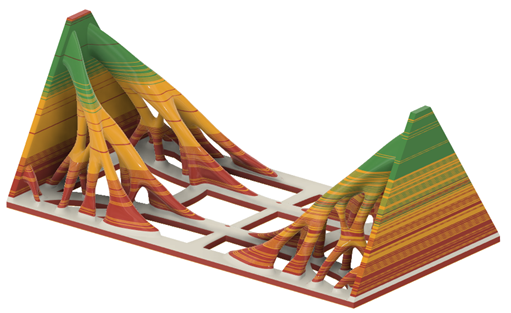 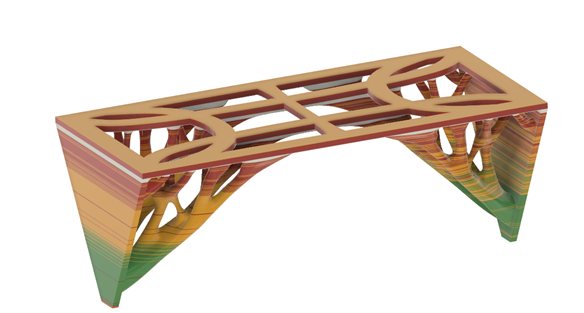 We should really talk about the sensors – a key piece of the project. Fiber Bragg grating (FBG) sensors are a type of fibreoptic sensor that can measure and transmit strain information. I’m not sure how exactly the technology works, but it’s certainly a fantastic mechanism for monitoring strain. (More traditional sensors were also used to measure temperature and acceleration, but from a visualization perspective we’ve focused so far on the data coming from the strain gauges.)

These FBG sensors were placed into the bridge’s platform partway during the printing process and then printed over.

For the rest of the bridge’s structure a different approach was needed: a robot was used to mill channels into the supports, such as in the below video showing the process on a test section prior to embedding sensors for testing.

Here’s a view of a resulting groove: the optical fibres were placed in these channels and covered over with silicon. 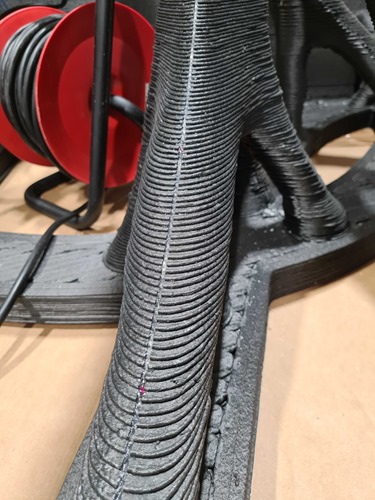 To complete this high-tech structure, it’s somehow reassuring to know that some work was done in a very traditional-looking workshop. The steps leading up to the bridge on either side needed to be bonded to the 3D-printed section, something that was done offsite. 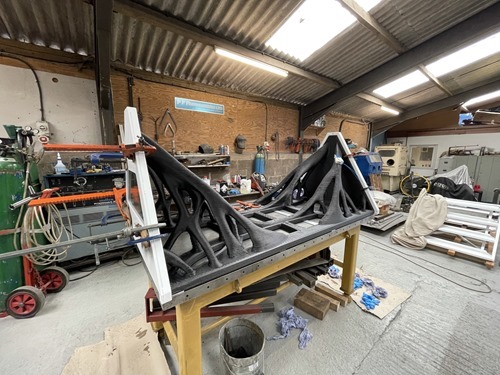 Once back in Birmingham it was a good opportunity to take a few snaps of the completed structure – albeit without the glass platform. 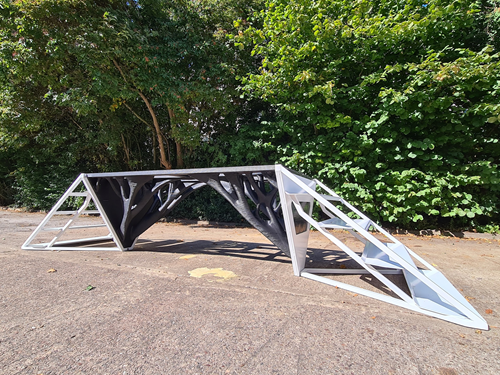 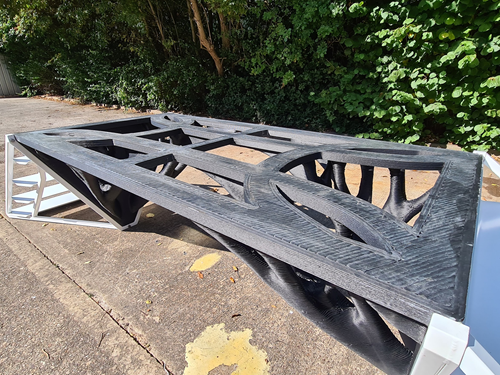 This one might have been a rendering – they so often use natural backgrounds, but the stray leaf is a bit of a giveaway. 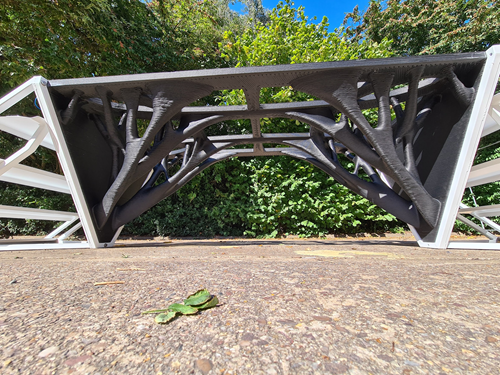 Here’s another beauty shot, showing off the bridge’s shadow. 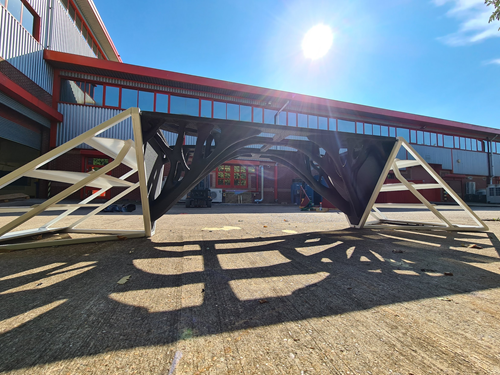 Eventually the time came for the bridge to be packed up and shipped across to Dubai. 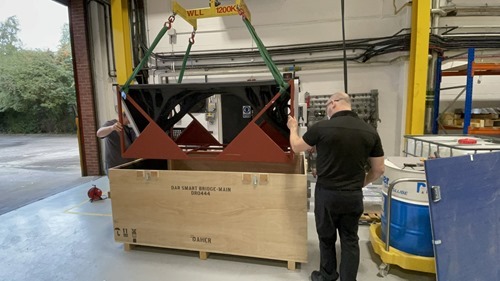 It was then displayed on the Dar stand at the 18th IRF World Meeting & Exhibition (organised by the International Road Federation) in Dubai in November 2021. 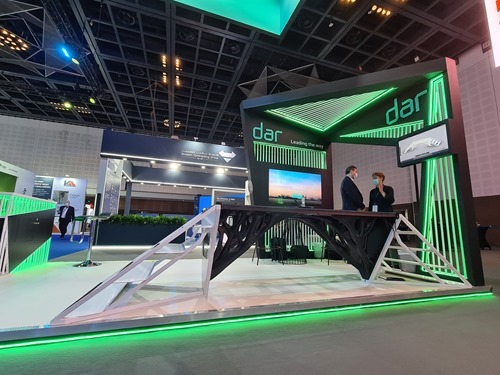 Key members of the project went to Dubai to make sure everything went smoothly. Here’s a photo of James Donnelly, Fikret Kalay and Peter Storey standing on the bridge. 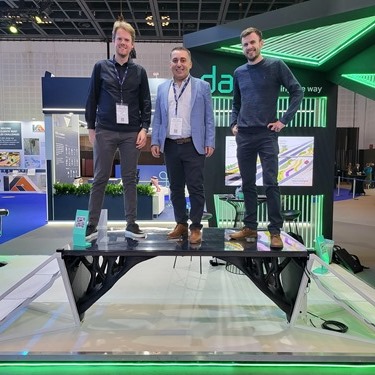 Since the event, I’ve been working on improving Dasher’s display of the incredible data coming from the bridge. At Dar’s request we’ve improved the ability for Dasher to handle realtime data streaming across directly from the bridge (via websockets), as well as coloring the sensor dots based on their values.

Here’s a more complete video showing the bridge inside Dasher:

It’s impossible to do justice to such an amazing project in a single blog post. The team has been working for years on developing this prototype, so I’ve inevitably glossed over or ignored fundamental – and no doubt time-consuming – work that was required for such a successful outcome. Congratulations to all those involved: it’s great to see the team’s hard work being recognised with a well-deserved Product Design and Manufacturing Excellence Award.

It seems the bridge is due to come back to Europe for BIM World Paris in early April: all being well I’m planning to hop on a TGV to head up for the event. I’m very much looking forward to seeing the bridge in person, and seeing how well Dasher deals with realtime display of its data!