The first version of VASA we posted to the Dynamo package manager was numbered 0.1.0. Yesterday we posted a new version with some interesting new features, not least of which is the lack of an error when you install it (this one was very much my fault: I’d neglected to mark a couple of DLLs as not being node libraries when I posted it).

Here’s a breakdown of the new features in 0.1.2, courtesy of the package’s author, Rhys Goldstein:

The first new node, VoxelModel.ToSolid is going to be very handy when we start looking at importing and working with point clouds in VASA – more on that soon.

The next two visibility-based nodes constraint the visibility analysis to be within one of two geometric shapes. Here’s cone-based visibility:

Here’s an animation to give you a better sense of how it works:

And here are a couple of screenshots of pyramid-based visibility: 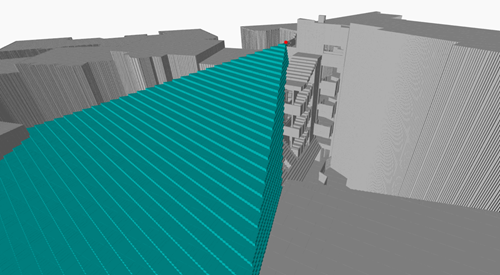 We expect the last two DistanceField nodes to be helpful for Generative Design workflows – something we’ll explore further in due course.

In case you’re wondering what happened to version 0.1.1, this was posted about 20 minutes before 0.1.2: during the publishing process Dynamo had picked up an older version of VASA hidden inside a “test” folder, and used that for the file definitions. I’ve now realised that it really does make sense to pay close attention to the warnings given during the Dynamo package publishing process. Hopefully with future releases it’ll be plain sailing, assuming I learn something from these various lessons.

Anyway, please do give this version of VASA a try, if there’s something in the above list that speaks to you. More features are on the way, and Rhys will certainly be recording more “how to” videos, looking at the various VASA sample graphs. Watch this space!