So here it is, the last episode of 2021. The first game we attempted to play – Super Huey – in many ways set the scene for the rest of the episode. Here’s a quote about the game from one of its reviews, as per its Wikipedia entry:

After not even being able to take off, we moved on to Crystal Fever (which I failed to find a level disk for, and so couldn’t play), Knightmare (a graphical adventure that really isn’t fun to play – or watch! – during a Floppy Friday) and then a mediocre platformer called Karnov and an underwhelming strategy game called BattleTech. The best of the bunch – in my opinion, anyway – was the last game, Rampage. It was at least a bit more fun that the others.

Here’s the cover art from this episode:

Here’s a review of Knightmare from issue 34 of Zzap! 64 magazine: 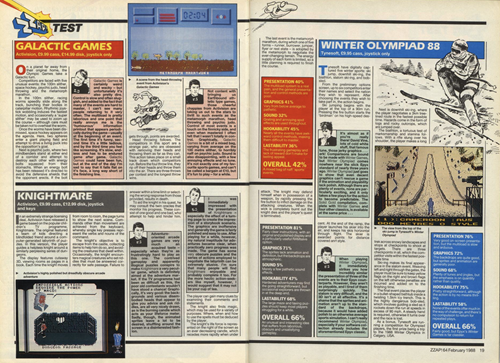