The subject is basically a perfect description of my own situation, today, but I thought there might be others out there in the same boat (as it were). I have a feeling that more people will end up being stuck at home over the next few weeks, whether they like it or not.

From my side I was very much looking forward to a trip to the UK, next week, where I’d have had the chance to catch up with my UK colleagues for the first time in-person in probably 2 years. And to join for the team Christmas Dinner, too. I’d even started reaching out to a few customers to set up meetings, as I really don’t want to take a plane these days unless there’s multiple reasons to do so (for the sake of the planet we simply can’t go back to the way things were before the pandemic).

The trip was pretty much completely organised, including catching up with a few friends and family members, when the weekend’s Omicron-related announcements hit the wire.

First was the news from the UK government that there’s a return to having mandatory self-isolation pending the results of the Day 2 PCR test (which can be taken from Day 0, of course). I shrugged this off to some degree, as I could take a RapidPCR at Heathrow on arrival – which apparently has a 3-hour turnaround – and still make it out for dinner the same evening, assuming the results were negative. It would add a bit of cost and hassle, but nothing too crazy.

Then the Swiss government announced a mandatory 10-day quarantine for people entering from the UK – basically meaning I’d be stuck at home for several days on the lead-up to the holiday break, which would be a more significant pain.

All in all – when combined with whatever risk there might be of bringing home a shiny new variant to my family for the holidays – it just made sense to cancel.

So, it seems as though I’ll have more time than anticipated next week to spend on other things. I’ve just been reminded by the Forge team that they’re holding one last virtual Accelerator next week – from December 6-10 – code-named Petra. 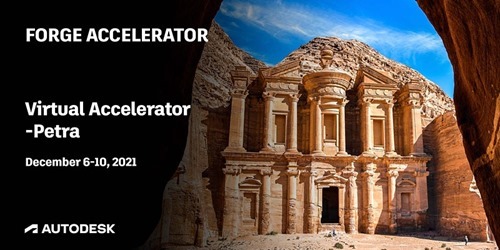 This is the last one of 2021 and currently has plenty of space for companies to join, which most likely means attendees will get privileged access to the smart band of folks who answer questions and help your projects stay on track during these events. If you look like you’re going to have some time next week to join then I strongly recommend doing so. I’ll also stick my head into the Slack channel from time to time to see if anyone has questions about Project Dasher or workflows relating to the Forge Data Visualization Extension.