« Bundle optimization in Project Dasher | Main | A minor update to Space Analysis (2D), and getting ready for 3D! »

[I’ve just heard the sad news that the computing pioneer Sir Clive Sinclair died last night. He changed the lives of many, many people who grew up in the UK in the 1980s. We owe him a very great debt. RIP, Sir Clive.]

Well, that was something. I spent a full hour recording this week’s episode, although I managed to whittle it down to just over half of that, as there was a huge amount of waiting around. I hope it’s still watchable enough.

It started well, playing what is apparently a conversion of a classic Atari 2600 game, Rally Speedway. It wasn’t the simplest game to play, but it was fun enough. Thinking I was carrying on with the theme, I then tried to load Test Drive. It took forever not to load, so do feel free to skip ahead on that and the next game – ACE 2 – which loaded but couldn’t be played without a copy protection code sheet. (I’ve since found a version of it online and so may try again next week – we’ll see.)

By this point I was getting a little frustrated, but thankfully it ended quite well, with The Great Giana Sisters – a self-professed Mario clone – the quite interesting Train Robbers and finally the Boulder Dash-like Rockford.

Here’s the cover art for this week’s line-up:

Here’s a review of Train Robbers from issue 38 of Zzap!64 magazine: 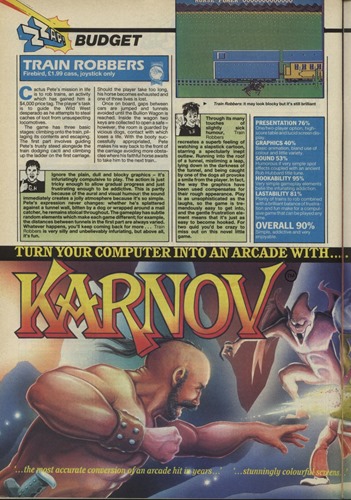