At the Forge Hackathon, counting down to AU2021

While I’m unlikely to be present for much of next week’s Autodesk University event – all being well I’ll be in Sardinia – I have been feeling the excitement mount ahead of it.

Mainly from attending the Forge Hackathon, which is now nearing it’s climax. The event kicked off with a really interesting event held via SpatialChat. I hadn’t used it before, but was immediately hooked. 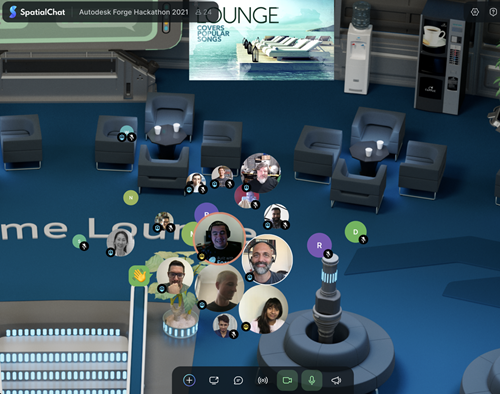 There were different rooms (fine), but even within a single room you could have private conversations by moving off into a corner. The sound increases as you get closer to a sound source, whether another person, or some music or a YouTube video being played. Yes, I did start a Floppy Friday episode playing just to see how it worked. What was really interesting is how the sound sources merged – if you wanted to listen to the video and some other music at the same time, you could just stand between them.

Anyway, this week the event’s proceedings have been run via Slack and Zoom. I did monitor the Slack channels, but didn’t see anything that really needed my input. I also joined today’s “coffee break”, to catch up with my colleagues and a couple of Hackers who had questions. 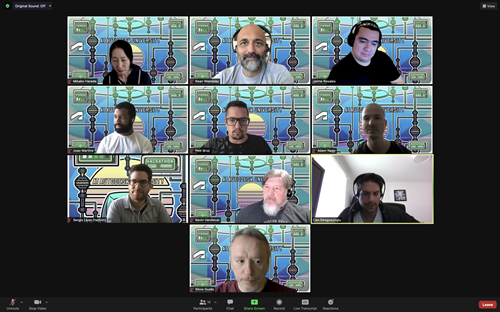 I tried my best to “fly the flag” today by sporting the swag sent through by the Forge team – my first Autodesk T-shirt with the new logo! 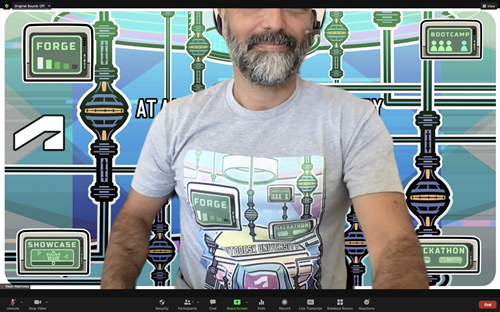 You’ll see it again in tomorrow’s Floppy Friday, if you watch it.

All in all the event seems to be going well. There are various teams but many have been very quiet, so it’s a little hard to tell how much progress is being made. We’ll see what tomorrow’s demo day brings. I have no doubt there’ll be some fun surprises!

One last note about next week’s classes – the Forge team have some local language classes that may be of interest to people:

Be sure to check one of them out if your preferred language is French, German or Spanish.