The MX3D bridge opens to the public

On Wednesday afternoon I headed back across to Zurich airport for my second trip to Amsterdam in as many weeks. This time I was flying with Swiss rather than KLM, and ended up checking in and boarding through an area of the airport I didn’t recognise at all. Whether this was because it had been so long since I’d been there or due to some deep refurbishment being completed during the pandemic remains to be seen. 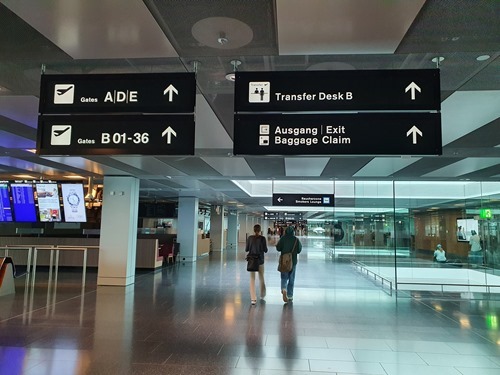 By the time I arrived in Amsterdam, things had progressed significantly with the MX3D bridge. Here’s a fun staged photo by Thijs Wolzak showing the team members helping with the preparation. 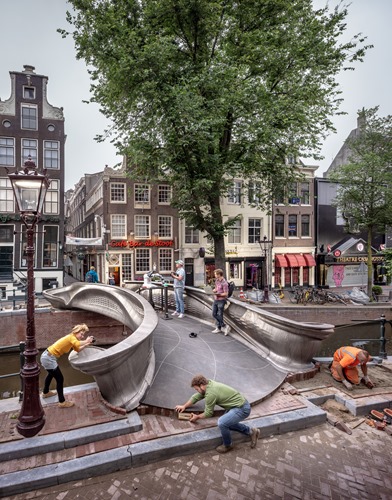 The physical installation – such as the final connection of the swirls or the laying of the surrounding brickwork – had been fully completed and its “nervous system” (i.e. the sensor network) had been switched on that morning: after some nervousness – and a few delays – we were delighted to see sensor data flowing from the bridge into our servers (and to the cloud – and Dasher!). It was probably as close to one of those scenes where NASA scientists high-five each other on completion of a key stage in a mission as I’m ever going to experience, myself. Although as the communication was done via Slack and WhatsApp – and with members of the Toronto team forcing themselves online at 5am – the celebrations were inevitably more muted.

A major pre-opening activity for the sub-team focused on the sensor network was running the set of commissioning tests, where someone performs specific actions (mainly movement) on the bridge with no other load, so that we can record a set of baseline readings for various sensors. These had already been completed as I was travelling from Schipol to the centre of Amsterdam, so I ended up having very little to do on arrival at the bridge, although I did take a few shots of the completed bridge still under wraps. 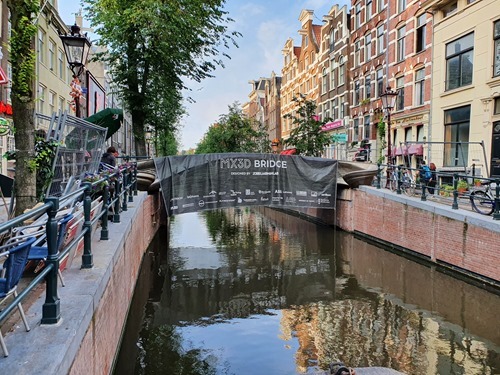 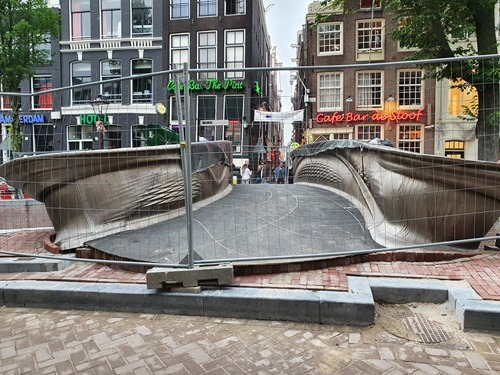 The grand opening took place on Thursday morning. As I was staying once again very close to the bridge, I saw people taking care of last-minute cleanup from our of my window. I headed down a little early to see whether there was anything I could do to help. (Sure enough, there was, although the MX3D team did have everything well under control.) 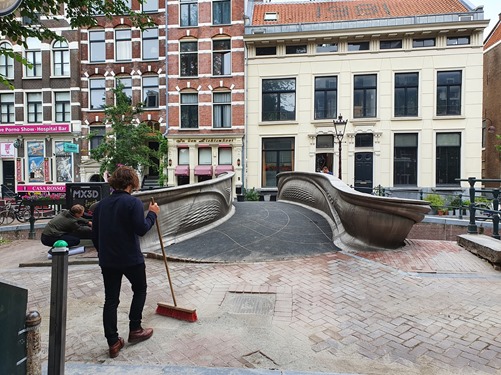 One thing I could do was help get a video of Dasher up on the projector in Cafe de Stoof: 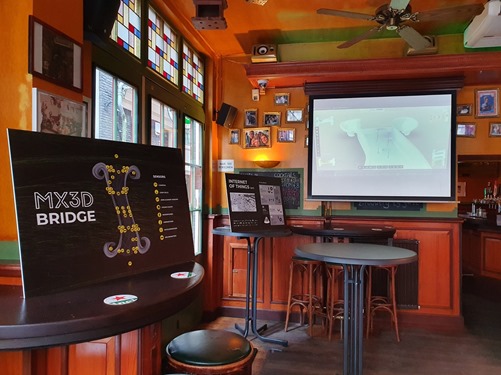 As you may well have read by now, the big news was that Queen Máxima of the Netherlands was there to perform the official opening, although very appropriately the ribbon was actually cut by an ABB robot. Here’s another shot by Thijs Wolzak – for fun, see if you can spot two things in the below picture: a) me and b) the backup scissors in case the robot failed. 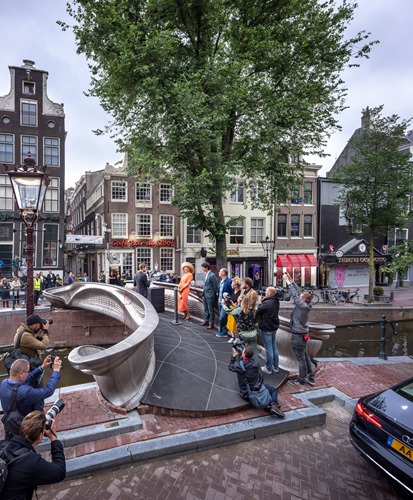 Here’s another shot of Queen Máxima on the bridge, this time by Jan de Groen: 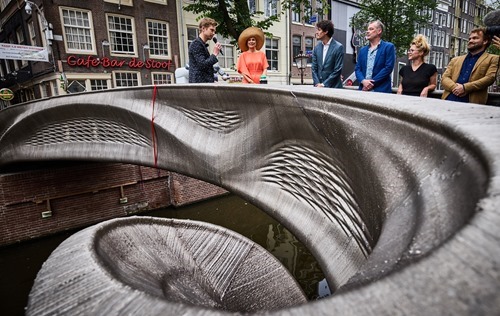 And one more, as Queen Máxima headed to Cafe de Stoof for a brief presentation and reception. I’m once again in this photo by Adriaan de Groot, and this time it’s showing my best side. 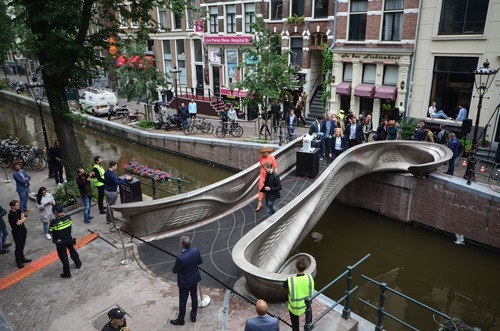 While I didn’t get to meet Her Majesty in person, it’s nice to think that Queen Máxima will have seen Project Dasher at the reception. I took this shot of the Queen leaving the De Stoof: 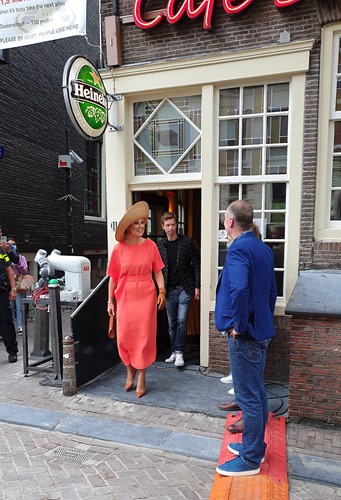 After the Queen left there was a gap before the general opening happened at 3pm. During the course of the day various people involved in the project were interviewed (including myself). Here’s Joris Laarman, the bridge’s designer, talking about the project: 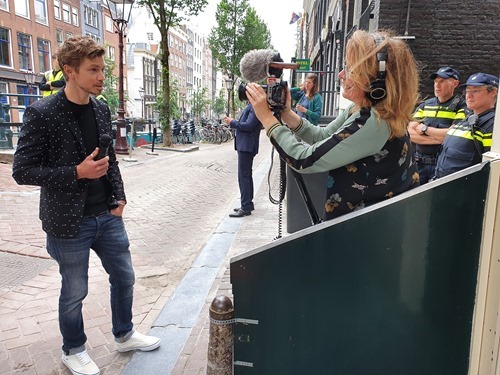 I was very happy to catch up with a few project collaborators such as Sage Cammers-Goodwin, who I was meeting for the first time in person. 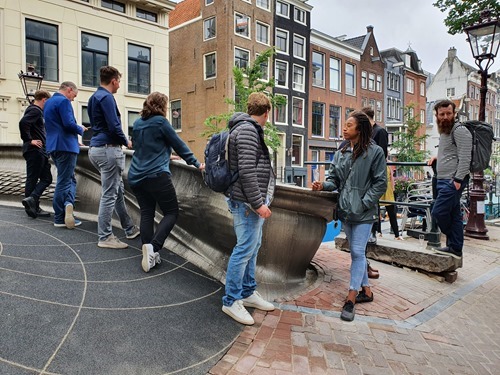 It was also great that a couple of local research colleagues – Pete Storey and Kelvin Hamilton (who strictly speaking works for Fusion 360’s research organisation, but is an honorary Autodesk Researcher) – could join for this session. 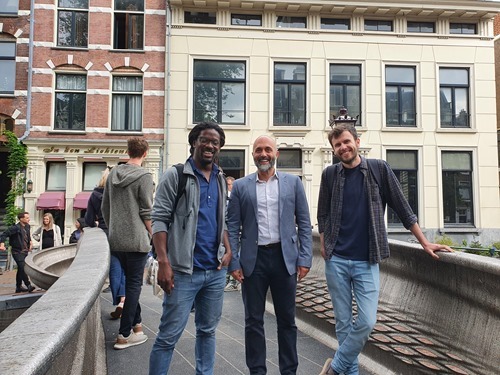 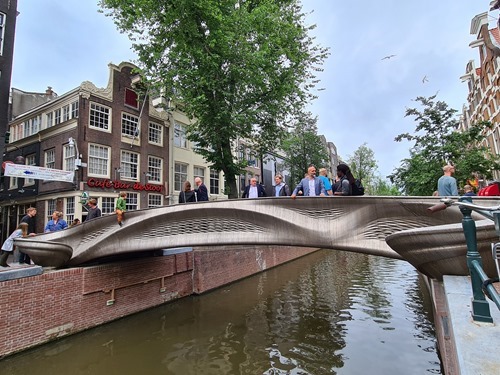 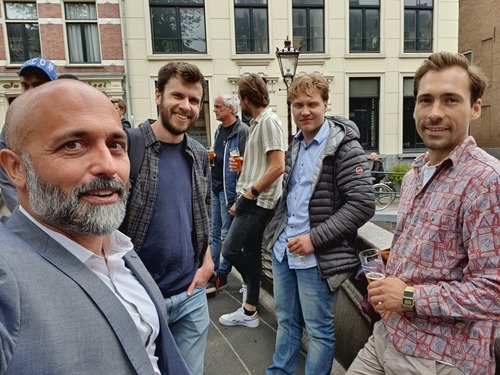 As soon as the bridge was completely open to the public, we immediately started to see that it’s going to be used in unexpected ways. Welcome to Amsterdam! 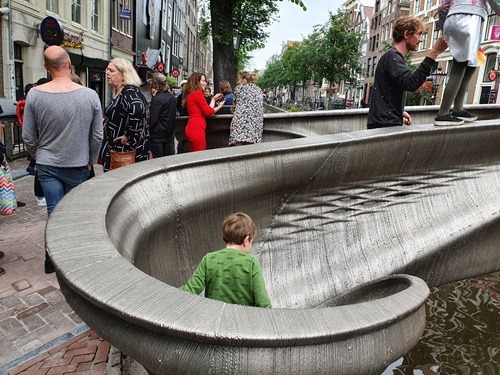 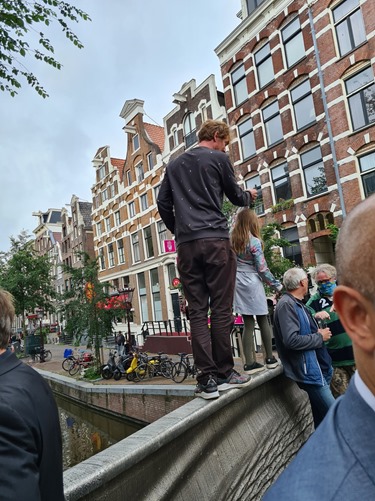 We were kindly invited to the Brouwerij de Prael for drinks before dinner with the MX3D team. We got there a little late – we were just having too much fun on the bridge – but did have time for a quick beer before heading to the restaurant. 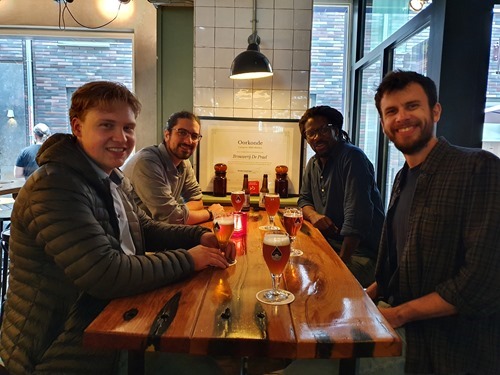 Dinner started with a great historical view of the project – and how MX3D has evolved as a company. 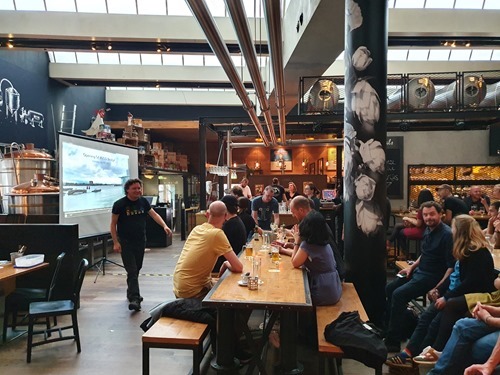 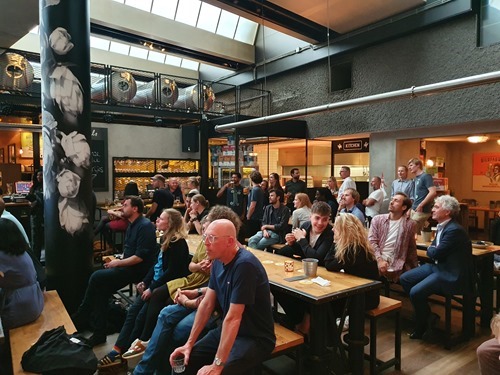 Tim Geurtjen’s, MX3D co-founder and former CTO, talked about the origins of the bridge project. 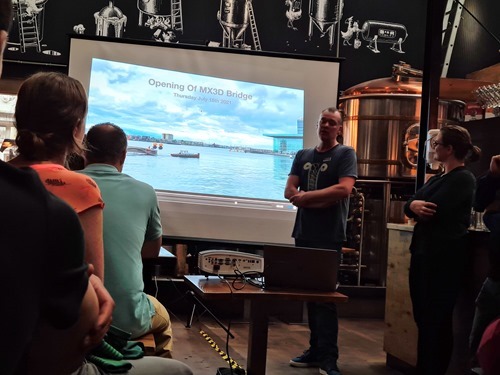 It was great to see the history – some of which I knew, but a lot I didn’t – and to have dinner with the team. I had some really interesting conversations with a number of current and former project collaborators. It was a lot of fun, and also very interesting.

Many thanks to all at MX3D for having us along, and a huge congratulations to the broader team, once again, on this huge milestone. 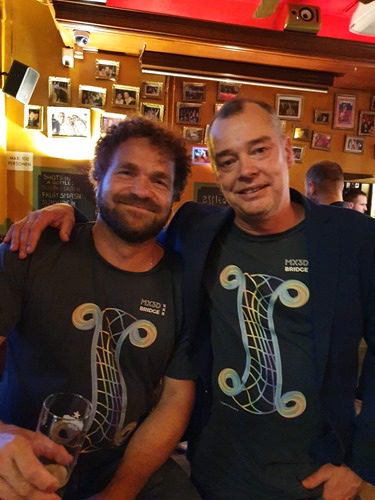 Some people went for a last beer or two at the De Stoof. Here’s Gijs and Tim, who I hope are justifiably proud of this incredible accomplishment.

These were just a few of the photos I want to share of last week’s event and the current state of the project. Over the course of this week I intend to share two more posts about the project, one focused on the data we’re starting to collect – and that you can already see for yourselves – while the second will take a look at the bridge from a more aesthetic perspective. Watch this space!