The big news from this week (for me, anyway, aside from a very enjoyable Star Wars Day, yesterday) is that Project Hyperion has been released officially to the public as the Forge Viewer’s Data Visualization Extension. All you need to do is to use it is to start making use of the Forge Viewer from v7.42 (it is available in earlier versions, but this is the most complete version) and then take a look at the extensive online documentation.

Congratulations to the Hyperion team for this major milestone! The work that has been done by that team to engineer and document a supported set of client- and server-side components is really significant. I’ve so far been working with the client-side pieces – the ones that were inspired by Project Dasher, as I’m in the process of reintegrating them into the mothership – but have so far been really impressed with the usability of the API and the quality of the supporting documentation, samples and the impressive reference implementation. A fantastic effort by all involved! (A quick reminder: if you’re interested in joining the team that made this happen, a Senior Product Owner position is still posted.)

A special shout-out is needed for the Developer Advocacy and Support team – particularly you, Michael and Petr – who have been guiding developers through their use of Hyperion at recent Forge Accelerators, as well as for the Accelerator attendees themselves: I know the feedback received was invaluable when honing the implementation and helping the team focus their documentation efforts. 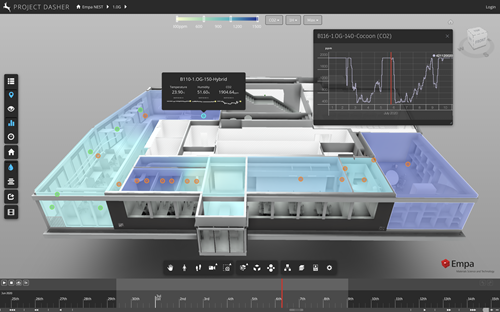 Congratulations also to all those [some formerly] at Autodesk Research who have been involved in Project Dasher since its inception at the end of 2009. To name a few names in no particular order: Azam Khan, Alex Tessier, Ramtin Attar, Hali Larsen, Simon Breslav, Josh Cameron, Mike Lee, Rhys Goldstein, Mike Glueck, Jacky Bibliowicz, Pan Zhang and Liviu Calin. As well as the team at CCTech in Pune (Vinayak Sutar, Vidit Vaghela, Rohit Gonnade and Smita Kamthe) who have helped us develop the timeline component and explore other digital twin opportunities. And to my current manager, Tony Ruto, who continues to be a strong supporter of the project. (Hopefully I haven’t missed anyone – I’ll add to the list if I have.)

I know that sounds like a long list of people, but bear in mind that very few have been involved in Dasher all the way through: I only joined the project when we started its transition to using Forge (it previously had a desktop-based client) in 2016, for instance. And there are a lot of moving pieces that contribute to the project: back when it started there were no easy-to-adopt, cloud-based, time-series databases nor any off-the-shelf sensor kits that could feed them. A lot of work was needed to make the project happen, including a major investment in tools to explore sensor data using different levels of detail (whether by implementing back-end “roll-ups” or consuming them via advanced shaders and responsive graphing components). And that’s not even talking about the adjacent work on computer-vision systems to extract skeleton data from camera feeds.

Not all of these research areas have found their way into Hyperion, of course, (at least not yet ;-) but they have all played a role in getting this valuable toolkit into the hands of Forge developers.

Simon, Hali, Mike and I have probably been most involved in the work around the Dasher front-end in recent years. I did have a quick call yesterday with Simon (who no longer works for Autodesk) about the fact that some of his work on Dasher was finally getting released into the wild: Simon was instrumental in developing a stylised point cloud representation for sensor dots, as well as the heatmap shader used for surface shading, both of which are very much part of the new toolkit. While the code developed by the Hyperion team is certainly more solid – and in many areas doesn’t bear much resemblance to what Simon or I created originally – the source of the inspiration is clear (and honestly I could not have hoped for a better outcome for our research). 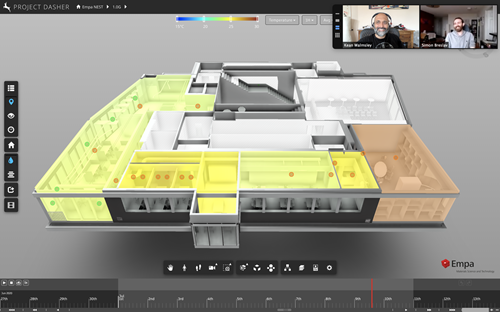 From my side I’ve been heads-down on getting surface shading switched across to use Hyperion under-the-hood, having worked on sprites last week. I was a little apprehensive about getting it working – as we have our own time-series back-end, and we also make use of a Navisworks export to aggregate models and provide room information, rather than using more recent innovations in the Forge platform – but I’m happy to say that it is now working well and I’ll be sharing details in a post at the beginning of next week.