A few weeks ago I came across an internal link to a new Chrome extension that greatly simplifies the act of working with the Forge viewer (which we refer to inside Autodesk as LMV, or the Large Model Viewer). Earlier this week its developer, Amit Diamant (who some of you may remember from the Big Room Hackathon project) reached out to let me know it was being made public.

This was really good news, as these Developer Tools contain some features I know will benefit the community (as I’m already using them myself).

The first killer feature is the “Hit monitor”, which tells you information about the geometry you’re hovering the cursor over. In the past I’ve often had to put breakpoints in the Forge viewer source to find out an object’s dbId when I select it. This one feature is going to save me a huge amount of time. 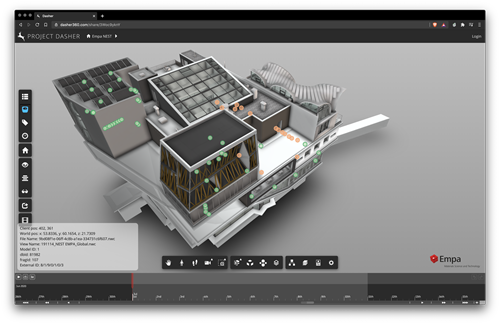 If you like your geometry systems non-Euclidean, you also need to play around with the “Minimap debug mode”, which allows you to set up arbitrary clipping planes for LMV’s camera. (I know the geometry isn’t actually non-Euclidean, but if you’re visualizing a model with interesting internal structure – such as Empa’s NEST, the demo model in Project Dasher – you’d be forgiven for thinking this was the case.) The third major feature I find really compelling is the ability to launch LMV Ninja, another must-have tool for Forge viewer developers, as it allows you to explore your model in various versions of the viewer alongside the full range of extensions Autodesk provides.

For a full introduction to these tools, here’s a video for you to watch.

You can install the LMV Developer Tools from the Chrome web-store, and given them a try with your favourite site hosting the Forge viewer! If you have ideas for new features that might benefit you, please do let me know: I know Amit would be happy to get your feedback.