Welcome to Floppy Ferrari Friday! In this week’s episode we look at two classic video game experiences that allow you to drive a Ferrari.

The first is one I’ve been meaning to play for some time and mentioned back in Floppy Friday #6: the classic 1985 arcade game Out Run. It was fun to play the Commodore 64 version – and on a classic “breadbin” C64, no less – but I will say I found the conversion to be a little lacklustre. I certainly enjoyed the arcade version more.

The second is a much more “serious” experience, which is Ferrari Formula One. (It’s interesting – and perhaps logical – that the wikipedia page is only available in Italian… well, there is a much shorter French version, but certainly no English one.)

I mentioned the state of the C64 I’m using when I bought it. Here’s the photo from the auction site: 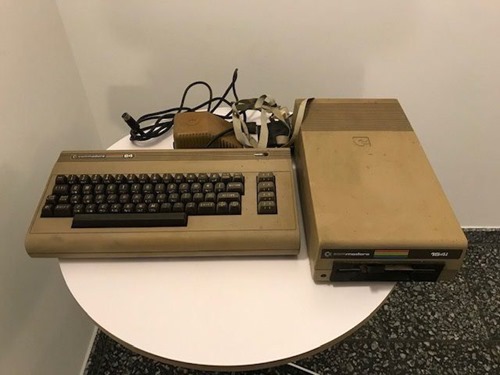 I really had very low expectations about whether it would prove to work, but I’m so happy I went and ahead and bid on it: the 1541 floppy drive is really the best one I have, and it wasn’t very complicated to get the C64 working well.

I mentioned in the video the process I followed to get Out Run onto a physical floppy, despite not having it in my set: I was able to connect my ZoomFloppy card to the above floppy drive and then send commands from my PC connected via a mini-USB cable to reformat a disk and copy the contents of a .D64 ROM to it. I’d originally purchased the ZoomFloppy to allow me to archive the various floppies I have (a job I haven’t yet started), but I very much like that it allows me to go the other way. This is going to allow me to take requests without worrying about whether I have the floppy somewhere in my collection (and even try out an early CAD package – Home Designer – once I have a Commodore 128 in my possession).

In this episode I also mentioned a review in Zzap64 magazine of Ferrari Formula One: 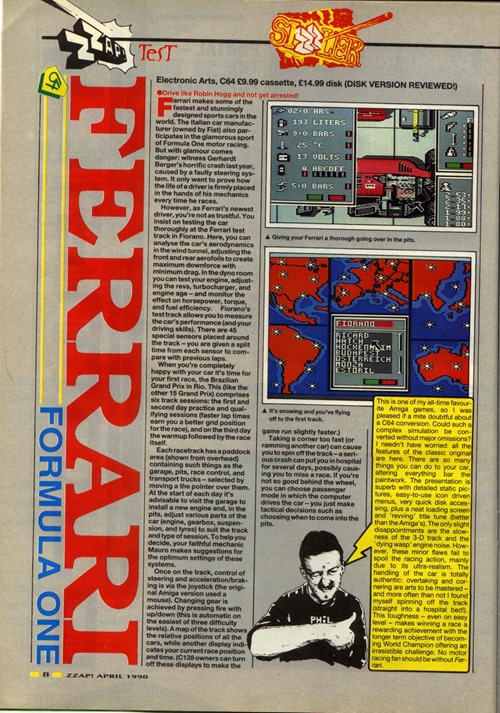 Hopefully the “dying wasp” audio effect is reproduced faithfully in the YouTube video.

It turns out that unplugging/replugging a joystick from/into a C64 while it’s running is a huge no-no, and a great way to fry delicate chips. My C64 is thankfully still running, but I’m going to bear this feedback very much in mind, moving forward. Please do the same yourselves!